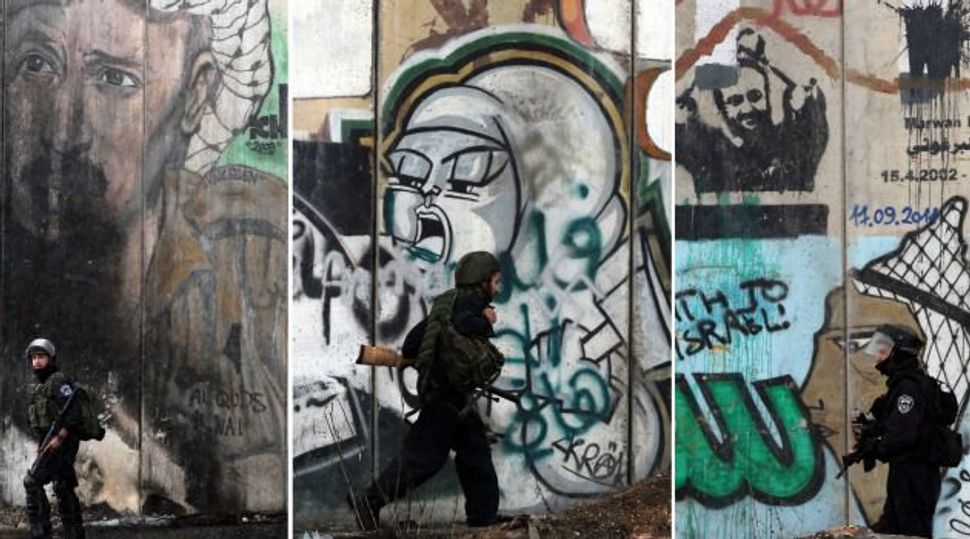 (Reuters) — For months, the streets of mainly Arab East Jerusalem, in the shadow of the Old City but where tourists seldom venture, have been ablaze, with daily clashes between armed Israeli police and Palestinians throwing rocks and Molotov cocktails.

The roots of the unrest are many: from the killing in July of a Palestinian teenager by Jewish extremists – apparently in revenge for the killing of three Israeli teenagers by Palestinians – to increased settlement building in East Jerusalem, the war in Gaza and a push by ultra-nationalist Jews to be allowed to pray at one of Islam’s holiest sites.

The seething anger was brought to the fore again on Wednesday, when a Palestinian man rammed his vehicle into pedestrians and Israeli border police on a road straddling East and West Jerusalem, killing one person and wounding a dozen. The attacker was shot dead by police.

The result is the greatest period of unrest the city has experienced since the second Palestinian uprising, or Intifada, began in 2000, a five-year period of conflict that left around 3,000 Palestinians and 1,000 Israelis dead.

While the upheaval has largely been confined to half a dozen neighborhoods in the hills and valleys to the south and east of the Old City, Palestinians say anger in their community now probably exceeds that of 14 years ago. And there are clear signs of the unrest spreading.

Last week, an Israeli-American activist who has led a campaign for Jews to be allowed to pray at the city’s holiest site – known to Muslims as Noble Sanctuary and to Jews as Temple Mount – was shot and wounded as he left a conference in the predominantly Jewish western side of Jerusalem.

The suspect in the attack, Palestinian Moataz Hijazi, was shot dead by Israeli police within hours, following an exchange of gunfire in Abu Tor, a Palestinian district just a few hundred yards from where the activist, Yehuda Glick, had spoken.

The week before, a Palestinian from Silwan, a district abutting the Old City where Jewish settlers have been growing in numbers, rammed his car into a crowd waiting at a light-railway stop, killing a three-month-old Israeli-American child and a woman from Ecuador.

The streets of Abu Tor, which locals call al-Thuri, were quickly aflame after Hijazi’s killing, with young men and boys throwing rocks at Israeli police, lighting fires, blocking the roads and promising revenge. Israeli forces responded with stun grenades and tear gas, while helicopters hovered overhead. Clashes went on into the night.

“Let them arrest us, let them shoot us, it doesn’t matter,” said Hamada Abu Omar, 21, one of those involved in the fighting, a black-and-white checkered scarf, the type made famous by former Palestinian President Yasser Arafat, around his neck.

“At least we can frustrate them, slow them down and show them we will never give up,” he said.

For Sayid Samer, 54, who was born in the Old City, runs his grandfather’s souvenir shop there and has watched the ebb and flow of tension over decades, Jerusalem is dangerously on edge.

“It’s more terrible now than it was in 2000, much worse,” he says, pursing his lips in concern as a group of Israeli police passed his store in the Muslim Quarter. “It’s like a war now.”

If there is a low-level war underway, its driving force has become the ancient marble-and-stone compound that houses the Aqsa Mosque, Islam’s third-holiest site, and the 7th century Dome of the Rock, the gold-plated shrine from where the Prophet Mohammad is said to have ascended to heaven.

Since Israel captured East Jerusalem from Jordan during the 1967 Middle East war and annexed it in a move not recognized internationally, Jews have been allowed to visit the site that they revere as Temple Mount, but are forbidden to pray there.

That is a source of frustration to many since the site is the holiest place in Judaism, where two ancient Jewish temples once stood, the second destroyed by the Romans in 70 AD.

In recent months, a campaign for the prayer ban to be overturned, led by Yehuda Glick and other settler activists, has gathered momentum, raising alarm among Palestinians and Muslims further afield who fear that the Islamic oversight of the compound that has existed since the crusades is threatened.

Prime Minister Benjamin Netanyahu insists the status quo will not change, but his reassurances have done little to calm nerves or religious sensitivities.

In a sign of frustration at what it called “unprecedented Israeli escalation” in Jerusalem, Jordan on Wednesday recalled its ambassador to Tel Aviv, days after the two countries marked 20 years of an historic peace accord.

“Dramatic developments on the Temple Mount have the potential to be a game-changer,” Udi Dekel of the Institute for National Security Studies in Tel Aviv wrote in a paper titled “Tension in Jerusalem: Preventing the Eruption of the Volcano.”

“The religious sensitivity regarding the site may result in an effect that impacts wide circles of people who identify with the site. Throughout the Arab and Muslim world, it may even arouse waves of support for violence.”

HARD TO RISE UP

While the anger on the streets may be akin to the last Intifada or even the first, which began in 1987 and lasted until the Oslo peace accords in 1993, the ability of Palestinians to strike at Israel has become far harder.

From aerial surveillance balloons to the high concrete wall that separates the Israeli-occupied West Bank from East Jerusalem, Israel has invested heavily in security measures and intelligence gathering since the early 2000s, making it extremely difficult for a mass uprising to emerge.

In Abu Tor, older Palestinian men who remember the earlier Intifadas are doubtful about prospects for another one focused on Jerusalem.

Ibrahim Hijazi, the father of the man suspected of having shot Glick, expressed anger at Israel’s occupation and the fight over al-Aqsa as visitors came to mourn his son’s death, but also a sense of resignation.

“We live in madness. This is supposed to be a holy city, but every year under occupation we lose more land, we’re humiliated and now with al-Aqsa we’re on the brink of a religious war,” he said, his eyes red and his face unshaven.

While no one underestimates the frustration felt by Palestinians in East Jerusalem, few believe at this stage that an uprising to equal those that have gone before is possible.

“What’s happening in Jerusalem is less of an uprising than a protest movement by the youth. Without the support of leaders, it seems unsustainable – while the Israeli police crackdown used against it is very sustainable,” Samir Awad, a Palestinian analyst at Birzeit University in the West Bank, told Reuters.

At the same time, Israel knows sentiment is shifting. The mayor of Jerusalem, Nir Barkat, has demanded that Netanyahu bolster security in and around East Jerusalem, with up to a 1,000 more police on the streets.

The Israeli cabinet this week approved draft legislation that would make throwing stones at vehicles a crime punishable by up to 20 years in jail, a decision seen as an effort to quell unrest in East Jerusalem and parts of the West Bank.

Condemned by the United States and European Union, Netanyahu has pushed ahead with settlement building in East Jerusalem, which opponents say heightens tensions, is illegal under international law and makes it even harder to negotiate a two-state solution to the conflict.

Palestinians see their neighborhoods changing as a result of the settlement drive. Silwan, where around 40,000 Palestinians live, now has around 500 Jewish settlers in it, with nine new buildings bought by wealthy pro-settler groups in the past two months with the aim of making the area more Jewish.

Locals see the move as a provocation, made more acute by the fact that their neighborhoods receive fewer services than Jewish districts in West Jerusalem, even though Palestinians pay an equal share of municipal taxes.

“There’s a mapped out strategy to create new facts on the ground which targets all Jerusalem and al-Aqsa at its heart,” Yasser Abed Rabbo, the deputy head of the Palestine Liberation Organization, told Reuters. “This battle has been opened and it can’t end until this plan has been foiled.”

Netanyahu’s response is defiance. Jerusalem, he says, is the “eternal and undivided” capital of Israel, effectively dismissing Palestinians’ goal of an independent state in the West Bank and Gaza with its capital in East Jerusalem.

On the ground in Silwan, Abu Tor and other neighborhoods of East Jerusalem, that is fueling anger and hatred that Palestinians are struggling to contain.

A new uprising may not look like the last ones, but the prospect of extended violence is increasing by the day.

“There are no leaders and no weapons,” said Ammar, a young Palestinian watching street clashes with two friends.

“God willing, we’ll take this oppression and send it crashing on their own heads.”