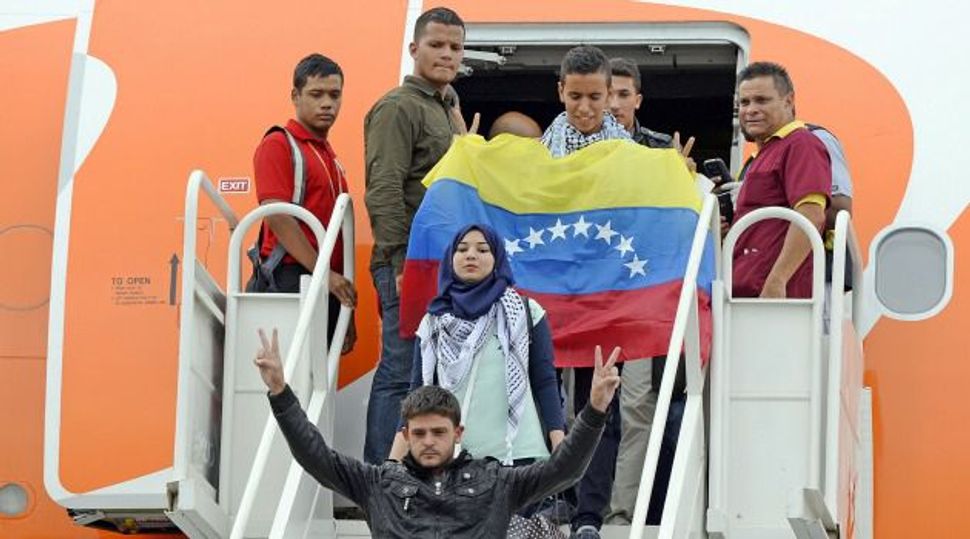 Future Doctors: Palestinian students flash the ‘V’ sign upon their arrival at the Maiquetia international airport in Caracas. Image by Getty Images

At least 1,000 Palestinians will receive a free university education in Venezuela.

The president of the Republic of Venezuela, Nicolas Maduro, welcomed 119 Palestinian students who will be trained in the field of medicine through the new Yasser Arafat Scholarship Program, and announced the expansion of the program.

“We will train at least 1,000 doctors, quickly, now. It is a hard goal but we can’t fail on this, we have no excuses. It will be difficult but we will train at least 1,000 Palestinian students. I just ordered the Ministry of Education to expand the program not just in medicine, we also will enable them to study engineering, architecture and every field of knowledge,” Maduro announced, in an address Thursday in front of the newly arrived Palestinian student delegation to Caracas, the Venezuelan capital.

Maduro said that he cried with emotion when he saw the images of the Palestinian students, who landed and started to dance in their first minutes in Venezuela. “We want to see you dance again,” said the president.

After hearing that, the Palestinian students started to dance again in front of the president, who received from them a keffiyah, or Arab headdress, and gave them his jacket. “Today, Palestine enters to the heart of Venezuela,” Maduro said.

More than 20 of the Palestinian students are from Gaza and the rest from the West Bank. They were picked up in Jordan by a plane sent from the Venezuelan government, that also brought ten tons of humanitarian aid for Gaza. In May, Venezuela announced that the South American country will supply oil to Palestine.

In August, Maduro publicly accused Israel of pursuing “a war of extermination against the Palestinian people” and has compared Gaza to Auschwitz.