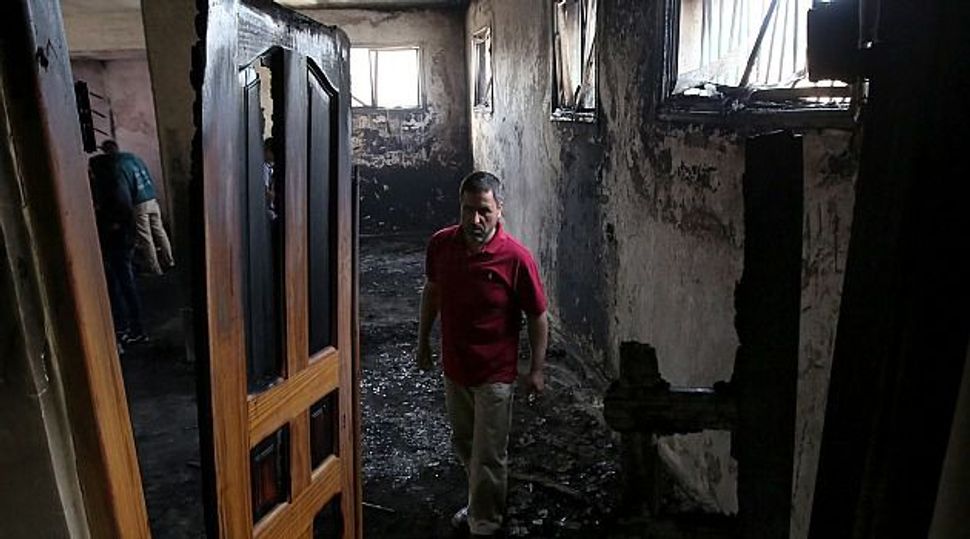 Hate Crime: A Palestinian man stands inside a mosque that was set ablaze by Israeli settlers in al-Mughayir, in the occupied West Bank near the Jewish settlement of Shilo. Image by getty images

A Palestinian mosque and an Israeli synagogue were damaged in separate arson attacks, police and local residents said on Wednesday, causing no casualties but stoking tensions that have flared over a contested Jerusalem shrine.

Youths entered Mghayr village in the occupied West Bank and set a fire which consumed the ground floor of the mosque before residents put it out, Mayor Faraj Na’asan told Reuters.

There has been repeated vandalism of cars and buildings in Mghayr and the village’s second mosque was partially torched two years ago, Na’asan said, blaming Israelis from nearby Jewish settlements.

Israeli ultra-nationalists say such so-called “price tag” attacks are reprisals for Palestinian violence or for any attempt by Israeli governments to curb settlement growth.

The vandalism has at times also targeted Christian sites and Israeli military facilities.

The Israeli police said it had sent a forensic team and a special “nationalist-crime unit” – set up last year to counter “price tag” incidents – to Mghayr, but that angry villagers had prevented them from entering the area.

Separately, police said, unknown assailants threw a petrol bomb overnight at an ancient synagogue in Shfaram, a predominantly Muslim and Christian Arab town in northern Israel. There was small-scale damage and police were investigating.

Tension has risen between Palestinians and Israelis in recent weeks as disputes have mounted over Jewish access to one of Jerusalem’s holiest sites, revered by Muslims as Noble Sanctuary, where al-Aqsa mosque stands, and by Jews as the Temple Mount, where their biblical temples once stood.

Israeli troops shot dead a Palestinian during clashes on Tuesday in the West Bank, a day after Palestinian assailants fatally stabbed an Israeli soldier and a woman in separate attacks that raised fears of a new uprising.