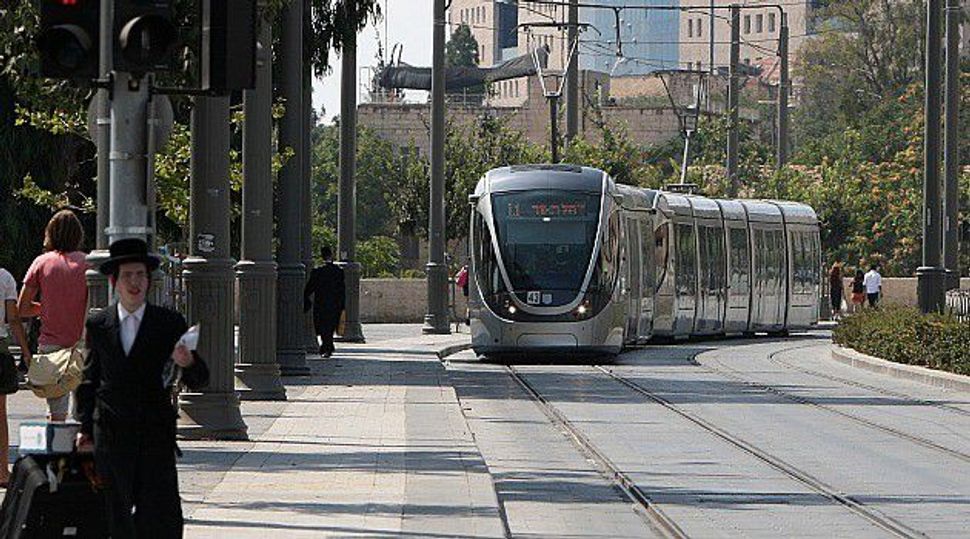 If there has been a constant target during weeks of unrest in Jerusalem, it is the divided city’s Light Rail, a sleek tram that snakes through downtown, past the ancient walls of the Old City, symbolically uniting Jewish West and Arab East.

Launched in 2011 after years of delays and budget overruns, the French-Israeli project was hailed as a piece of world-class infrastructure that would transform the city, bringing Israelis and Palestinians closer through shared public transport.

While in some ways that has happened, with up to 140,000 people – from ultra-Orthodox Jews to Palestinian workers, Muslim schoolgirls and Israeli bureaucrats – using the train each day, the past few months have torn that cosmopolitan picture apart.

Since the July murder of a 16-year-old Palestinian, burned to death by Jewish assailants in revenge for the murder of three Jewish teenagers, the light rail has become a target of almost daily attacks by Palestinian youths throwing rocks, stones and petrol bombs. [http://link.reuters.com/pan43w ]

Three of the train’s 23 stops, in the Palestinian neighborhoods of Shuafat and Beit Hanina, look more like low-grade war zones, the glass-and-steel waiting areas smashed and boarded up, the ticket machines destroyed or removed, heavily armed and edgy Israeli police watching from every corner.

“Every day there is trouble,” said Ibrahim Salah, 58, who runs Halawani, a sweet store facing the ruined Shuafat stop.

“There’s a lot of anger about the train,” he said, dismissing it with a sweep of his hand. “It only goes through here to get to the Jewish settlements. It’s for them, not us.”

Twice in the past three weeks, Palestinian drivers have rammed their cars into people waiting at light rail stops along the Green Line that has invisibly separated West Jerusalem from East since 1967, killing four people and wounding 20. Both drivers were shot dead by Israeli security forces.

Passenger numbers dropped by 20 percent and at one point a third of the tram’s 46 carriages were too damaged to be used.

On board, there are Jewish men in religious skullcaps next to Muslim women in headscarves, Palestinian farmers going to the market and boys going to school, everyone chatting on mobile phones in Hebrew, Arabic, Russian, Amharic and English.

But there are also sideways glances, lingering looks that betray edginess and moments of frustration, as when a Palestinian man was asked to step off by police and show his ID.

“Are you scared to ride this thing?” asked Richard Kanowitz, 54, a jovial Orthodox Jew getting on the train at Jerusalem’s City Hall, before he could be asked the same question.

“Look, the train is good,” he said. “It helps everyone. It’s been a target, sure, but ultimately it’s a good thing.”

Tourists like it, with its quick access to the Yad Vashem Holocaust museum at one end of the line, the famed Mahane Yehuda market in the middle and the breathtaking Old City views.

But for many young Palestinians it remains a source of hatred, the anger stemming in part from the fact that while the train runs through two Palestinian districts, its destination at the northeast end is the Jewish settlement of Pisgat Ze’ev.

“It’s a racist train,” said Abdul Rahman, an 18-year-old hanging around the Shuafat stop, Israeli police watching him from across the road. “I use it, but I don’t like it.”