Lifting Manhole Cover Off Tale of Shoah Survival in Lviv 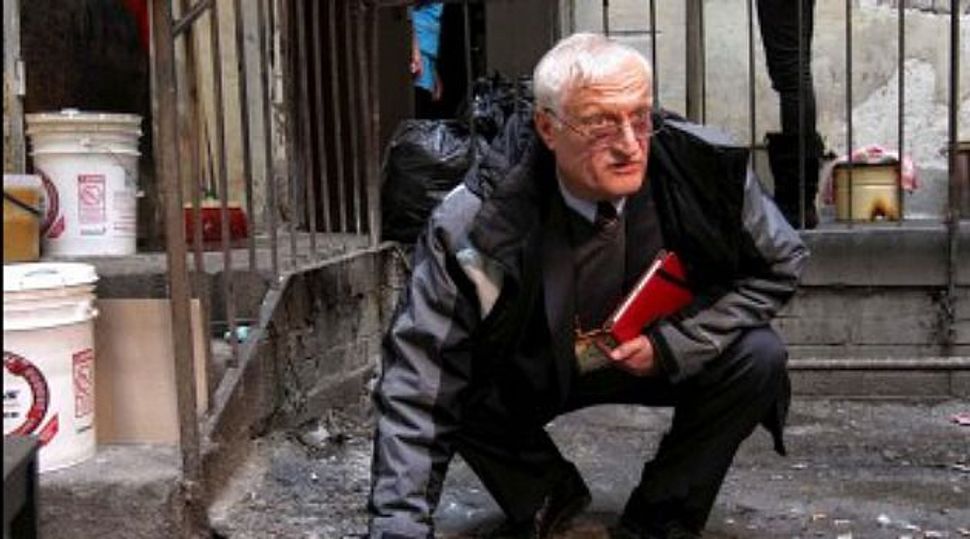 (JTA) — Chaim Chesler doesn’t back down easily from a dispute — especially one involving a unique tale of Jewish survival in the Holocaust.

But even Chesler, founder of the Limmud FSU Jewish learning conferences, was taken aback by the intense resistance he encountered earlier this month from an elderly lady in the Ukrainian city of Lviv, who tried to stop him from leading a group of journalists on a tour of the city’s famous sewage pathways that Jews had used to escape the German occupation forces above ground.

“We were about open the manhole cover when this lady started screaming, cursing,” he said of the Nov. 6 face-off. “I thought she was going totally berserk and, frankly, I was getting a little bit concerned.”

In a country hit by a crippling recession and abject poverty, the group of journalists looked to the elderly lady like the sort of metal thieves that she and other Ukrainians have been fending off for years.

Part of the misunderstanding stemmed from the fact that while the tunnel Chesler visited is internationally famous as the scene of one of the Ukraine’s best-known Holocaust-era stories, among the local population it has been virtually forgotten. Because it is rarely visited and bears no plaques or other indications of its history, this place where Holocaust survivors emerged to the light of day after 14 months in the sewer is unknown to locals.

The sewer pathway in Lviv became internationally known thanks to the testimony of Krystyna Chiger, a Holocaust survivor who moved to Long Island, N.Y. and whose harrowing account of survival in the sewer with her family served as the basis for the 2011 feature film “In Darkness.” A Polish production, the film was nominated for the Academy Award for Best Foreign Language Film. Chiger also published an autobiography titled “The Girl in the Green Sweater.”

Chesler had planned to bring Chiger over to the tunnel from which she escaped 71 years ago as part of the events of Limmud FSU’s first Lviv conference, but she couldn’t make the trip because of health concerns.

So Chesler, who visited Chiger last month togetter with Limmud FSU cofounder Sandra Cahn, arranged to have Chiger speak to participants via video chat after the tour of the actual locale from which she emerged, at the age of 8, with her little brother, parents and six other individuals who survived thanks to the help they received from non-Jews who kept them alive underground.

“We had been without light or very little light for 14 months, so when we came out, the sun was shining, we saw everything in red light, orange-red,” she recalled. “We couldn’t see anything. My brother, who was 3 when we went under, started crying and told my mother: ‘Let’s go back.’ He had forgotten how the world looked like.”

Underground, the group was kept alive by Leopold Socha and his wife, Magdalena. A Polish sewer inspector who knew the tunnels well, he used his knowledge to keep the refugees safe after they escaped from the ghetto with help from his colleague Stefan Wroblewski. Of a group of 20 Jews who went underground, only 10 survived the war.

Socha died in a car accident in 1947. He was posthumously recognized as a Righteous Among the Nations — Israel’s title for non-Jews who risked their lives to save Jews during the Holocaust — in the 1970s.

Yet despite the underground rescue story’s international fame, the city of Lviv and Ukraine’s government have so far made no attempt to commemorate the place.

Lviv Mayor Andriy Sadovyi agreed to support a plan to erect a modern monument there sometime next year, according to Chesler, whose Limmud FSU group operates in cooperation with the International Fellowship of Christians and Jews.

The story carries special significance today in Lviv, which is considered the capital of Ukrainian nationalism and birthplace of the xenophobic Svoboda party.

“Especially here, especially today, the monument will a strong sign of Ukraine’s commitment to remember, also through this bittersweet story, the actions of the heroes who rescued Jews, but also the genocidal hate that led to the death of so many others,” Chesler said.

Lifting Manhole Cover Off Tale of Shoah Survival in Lviv