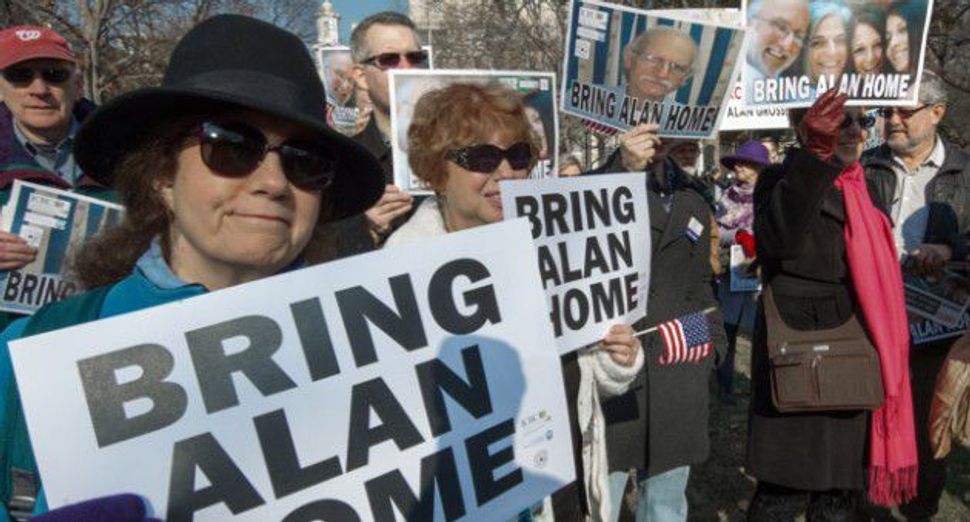 Captive: Protesters rallying around the cause of freeing Alan Gross. Image by Getty Images

A federal appeals court upheld the dismissal of a lawsuit filed against the U.S. government by Alan Gross, the American-Jewish contractor imprisoned in Cuba since 2009.

In a 3-0 decision Friday, the U.S. Court of Appeals for the District of Columbia Circuit said the government cannot be sued for injuries that occurred in another country.

The ruling affirmed a lower court judge’s dismissal of the $60 million lawsuit in May 2013.

Gross and his wife, Judy, filed the suit in November 2012 against the U.S. government and a government contractor charging that Gross should have been better trained and informed of the risks before going to Cuba to set up Internet access for the Jewish community there.

The Grosses settled in mid-May with Development Alternatives Inc., a Maryland-based contractor for the U.S. Agency for International Development, for an undisclosed amount. Gross was working for the USIA.

Gross, 65, of Potomac, Md., was leaving Cuba when he was arrested in December 2009 for “crimes against the state.” He spoke virtually no Spanish and traveled to Cuba five times under his own name before his arrest. He is serving a 15-year sentence.

The senators told The Associated Press that there was no indication that a development in releasing Gross was imminent. Cuba has expressed an interest in negotiating a trade of Gross for three Cubans who are jailed in the United States on espionage charges.

In August, Gross said he could no longer take life in prison and reportedly said goodbye to his family.