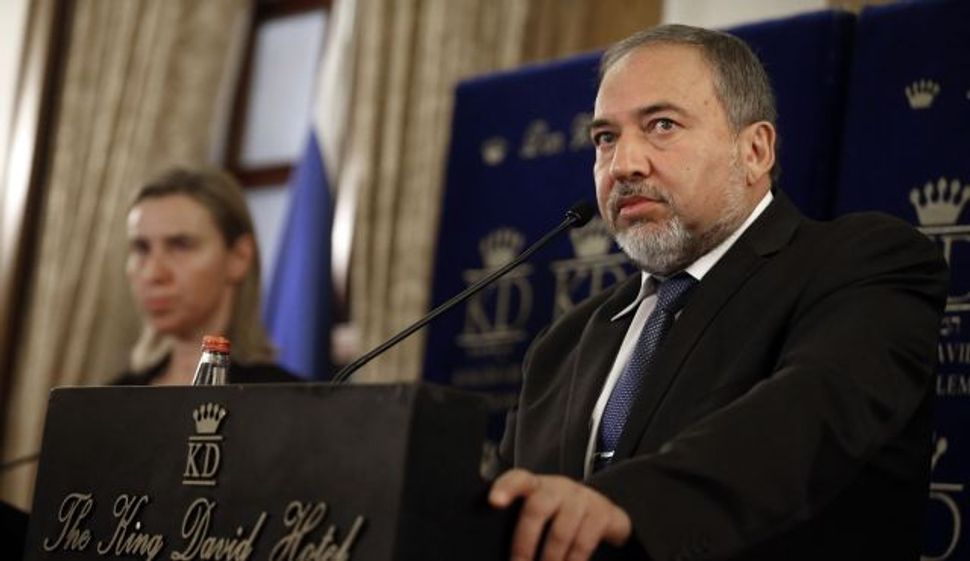 (Haaretz) — An internal European Union document on proposed sanctions against Israel, which Haaretz obtained in its entirety on Monday, reveals new details on the suggestions being made in the internal discussions among EU member states that have been taking place in EU institutions in Brussels. Among the options under consideration are measures against European companies that work in settlements in the West Bank and East Jerusalem.

If this measure should be carried out, it could harm quite a few Israeli businesses that work with European companies on projects in the settlements. For example, the Dutch Foreign Ministry recommended that the Dutch water company Vitens not carry out projects in the settlements in collaboration with Israel’s water company, Mekorot. Several months previously, the Dutch government recommended that the Royal Haskoning infrastructure company reconsider constructing a sewage purification plant in East Jerusalem for the Jerusalem municipality.

High-ranking European diplomats who were involved in discussions about the document told Haaretz that work on the topic began on September 11 of this year. The EU’s Political and Security Committee in Brussels, which is made up of the ambassadors of the EU’s 28 member states, gave the committee of experts on Middle Eastern affairs, which is known in EU jargon as the Mashreq-Maghreb Working Party, MaMa for short, the task of drafting a document containing the response measures to acts by the Israeli government that are liable to make the two-state solution an impossibility.

Examples of this are construction projects in the area known as E1 between Ma’aleh Adumim and Jerusalem, and in the Jerusalem neighborhoods of Givat Hamatos and Har Homa, both of which are over the Green Line. The European Union believes that construction in these places endanger the possibility of establishing a Palestinian state with territorial contiguity and could keep Jerusalem from being the capital of both states.

The high-ranking European diplomats emphasized that contrary to the claims of Israeli Foreign Ministry officials, the EU European External Action Service and particularly its director Christian Berger, served only as coordinator between the member states that made the action proposals that were included in the document.

“A large group of member states pushed for this move after the failure of the talks between Israel and the Palestinians and after the war in Gaza,” the European diplomats said. “Several states, including some that are considered great friends of Israel, are the ones who conceived the move and are now hiding behind the EU’s foreign service so that it can act as the bad cop.”

The senior European diplomats said that the document was written after a mandate was received from the political echelon of all 28 member states. “This is not a case in which eurocrats in Brussels are working against Israel on their own,” the European diplomats said. “This is a sign that a great deal of anger and frustration exist in the member states. In recent months there were meetings of European foreign ministers in which ministers, who are considered extremely close to Israel, spoke in the most critical way against the policies of Netanyahu’s government.”

The European diplomats added that although the Israeli Foreign Ministry knows very well which countries are behind this move, it finds it convenient to accuse the EU’s foreign service. “The fact is that there is an agreement among all 28 member countries of the European Union to discuss measures against Israel, and that is what should worry the government in Jerusalem and the Israeli public,” they said. “This paper will be handed over to the political echelon in Europe, which will decide which actions, if at all, to take.”

The full document about the sanctions includes further measures in addition to the ones reported in the two articles on the topic that were published in Haaretz over the past two days. The section about relations with the Palestinians proposes that the EU reassess “EU funding or capacity-building activities indirectly helping to perpetuate the status quo of occupation” to make sure that the funds are not used indirectly to perpetuate the Israeli occupation of the West Bank.

That section also proposes “support, or non-opposition,” of unilateral Palestinian actions such as “applications to international organizations” or requests for recognition. The document also proposes examining the possibility that additional European countries recognize a Palestinian state, as Sweden did recently. On the other hand, the paper also suggests punitive measures against the Palestinians. For example, in response to negative actions by the Palestinians, “the EU could continue to dissuade [the Palestinians] from moving ahead in the context of international organizations and use its leverage to that end.”

In the section about bilateral relations with Israel, the document proposes actions such as a “no contact policy with settler organizations/Refuse to engage with settlers including public figures and those publicly rejecting the two-state solution.” A measure of this kind could lead to a boycott of senior government ministers such as Naftali Bennett and Uri Ariel of Habayit Hayehudi, many Knesset members from Likud and even in extreme cases President Reuven Rivlin, who does not support the establishment of a Palestinian state alongside Israel.

The document also states that one of the measures could be a reassessment of the distribution of EU funds that are provided to joint projects with Israel “in line with the ‘more for more, less for less’ policy.” In other words, it also includes an incentive in the form of greater European investments in joint projects with Israel in response to progress in the peace process.

Another incentive in the document is the issuing of statements, coordinated with all 28 EU member states, “to openly support Israeli leaders taking hard decisions and help re-creating a positive dynamic, including in relations with the Palestinians.”