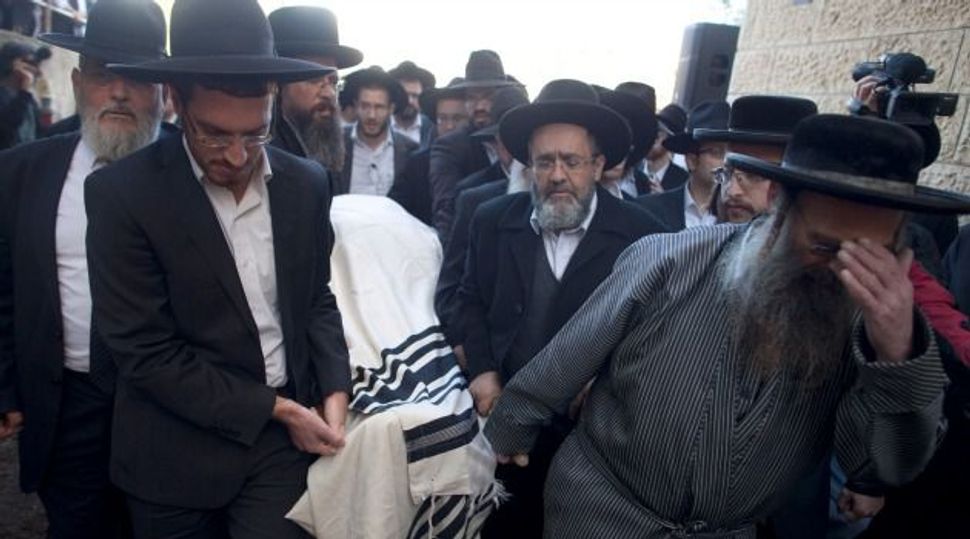 Rabbi Moshe Twersky is laid to rest by ultra-Orthodox Jews after the terror attack on a Jerusalem synagogue. Image by getty images

Thousands of ultra-Orthodox Jews swayed in prayer at the funeral of U.S.-Israeli rabbi Moshe Twersky, a descendant of two rabbinical dynasties who was killed on Tuesday alongside three other rabbis in a Palestinian attack on a synagogue.

Family, friends and admirers of Twersky, whose father was a pre-eminent Jewish scholar, expressed disbelief as they addressed the crowd of mourners through loudspeakers at a seminary in West Jerusalem were the funeral was held.

“We are so shocked. He was one of the world’s most amazing people,” said Esther Greenwald, a friend of Twersky’s widow, Miriam, who was immersed in prayer for much of the service.

Two Palestinian men armed with meat cleavers and a gun entered the synagogue in a quiet ultra-Orthodox neighborhood during morning prayers and attacked around 25 worshippers, killing four and wounding eight, several seriously.

The assailants, from predominantly Palestinian East Jerusalem, were shot dead by police.

The attack was the latest in weeks of escalating violence in Jerusalem that has raised fears of a religious conflict.

At the funeral, two of Twersky’s young granddaughters wiped away tears, bowing their heads as they stood next to his widow.

Twersky, 59, had five children. He immigrated to Israel in 1990 from Boston, where his late father, Isadore, was a founding director of a Jewish studies center at Harvard University and a renowned scholar.

He was also a grandson of Joseph Soloveitchik, a renowned Boston rabbi who died in 1993.

Followers described Twersky as a rare rabbi in that he managed to bridge two worlds, being a descendant of a Hasidic dynasty that traces its roots to 18th century Ukraine while being an heir to a modern Orthodox Jewish leader in the United States, an advocate of a different form of Judaism.

“It’s an unbelievable loss for us,” said a student at one of two religious seminaries where Twersky played a leading role.

Meshulam Twersky, the rabbi’s eldest son, hailed him as someone “you could always pour your heart out to,” adding that his only solace was that his father had died in prayer.

A separate funeral service was held for the other victims – Avraham Goldberg, 68, a British-Israeli who immigrated from London in 1993, Kalman Levine, 55, who was born in the United States and Aryeh Kupinsky, 43, who also U.S.-born.

President Barack Obama condemned the synagogue attack and urged all Israelis and Palestinians to work to lower tensions after weeks of violence. The U.S. Federal Bureau of Investigation said it would help Israeli authorities investigate the attack as three of the victims held U.S. nationality.