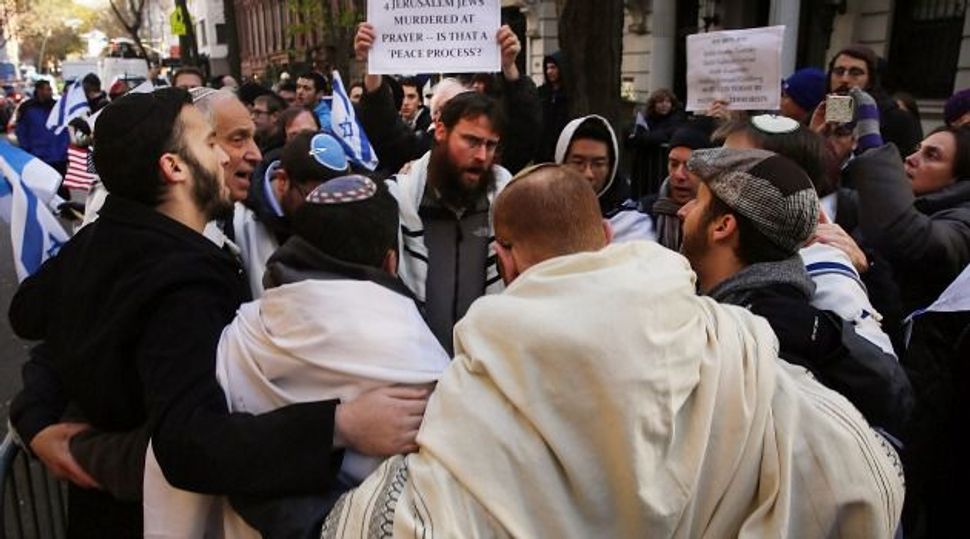 Protesters gather outside the Palestinian mission to the United Nations after the terror attack on a Jerusalem synagogue. Image by getty images

(Reuters) — Family and friends remembered three U.S.-born rabbis slain in a Jerusalem synagogue on Tuesday, praising one as the scion of his Boston family’s rabbinical dynasty and another as “one of the kindest souls” in his hometown of Kansas City, Missouri.

As tributes poured in for the victims of the gun and meat cleaver attack, about 40 demonstrators chanted and waved flags outside the Palestinian Mission to the United Nations in New York to express outrage that two Palestinians killed Jewish worshippers during morning prayers in Israel.

A small group of protesters pushed through police barricades and placed signs on the mission’s doorstep, including one that read, “Abbas: Your Intolerance Led to Jerusalem Massacre Today,” referring to Palestinian President Mahmoud Abbas who on Tuesday condemned the attack.

Three of the victims had dual U.S.-Israeli citizenship and were identified as Mosheh Twersky, 59; Cary William Levine, 55; and Aryeh Kupinsky, 43. A fourth, Avraham Shmuel Goldberg, was a 68-year-old British-Israeli. All four were ordained rabbis.

Rabbi Kalman Levine, known as Cary to friends from his hometown of Kansas City, moved to Israel shortly after college to devote his life to religious studies, said friend and former classmate Debbie Sosland-Edelman.

“He was all about reaching out to others. He was one of the kindest souls you would ever want to know,” said Sosland-Edelman, who learned about Levine’s death through a Facebook message from a friend in Israel.

Twersky was a member of one of the most revered families in the Boston-area Orthodox community. His late grandfather, Rabbi Joseph Soloveitchik, founded the Maimonides School in suburban Brookline, considered the first Jewish day school in New England and a cornerstone of the Modern Orthodox movement that aims to bridge religion and modern life.

Twersky’s father Rabbi Isadore Twersky was a longtime professor at Harvard University and director of its Center for Jewish Studies.

Mosheh Twersky graduated from Maimonides in 1973 and moved to Israel, where he became dean of Jerusalem’s Toras Moshe yeshiva religious school.

His eldest son, Meshulam Twersky, at his funeral in Jerusalem on Tuesday, hailed him as someone “you could always pour your heart out to” and said his only comfort was knowing his father died in prayer.

“He was one of the world’s most amazing people,” said family friend Esther Greenwald.

No information was immediately available about Kupinsky.