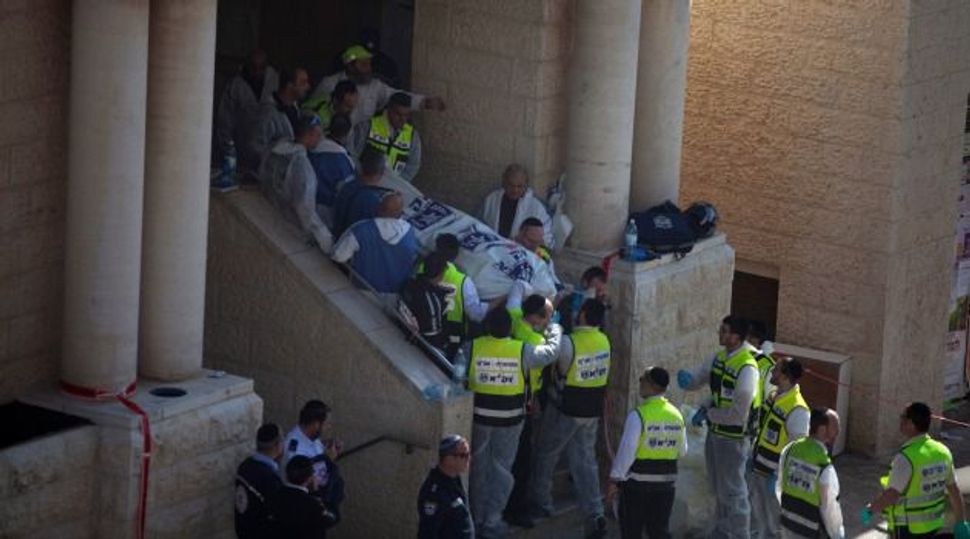 Israeli emergency personnel take out a body of an Israeli man outside a synagogue in Jerusalem after a deadly terror attack. Image by Getty Images

The number of victims in the terror attack on a Jerusalem synagogue rose to five with the death of a police officer.

Zidan Saif, 30, of the Druze village of Kfar Yanouch in the Galilee, died Tuesday evening from a gunshot wound to the head suffered in a shootout with the two Palestinian assailants in that morning’s attack at Bnei Torah Kehillat Yaakov. The synagogue was located in the fervently Orthodox Har Nof neighborhood of western Jerusalem.

Seven others were injured in the attack, some critically.

Eyewitnesses told the Times of Israel that Saif was shot while protecting another police officer. He is married and the father of a 4-month-old daughter.

Four worshippers, all rabbis, also were killed in the attack, which took place during services. Three of the dead are dual American and Israeli citizens; one was also a British citizen.