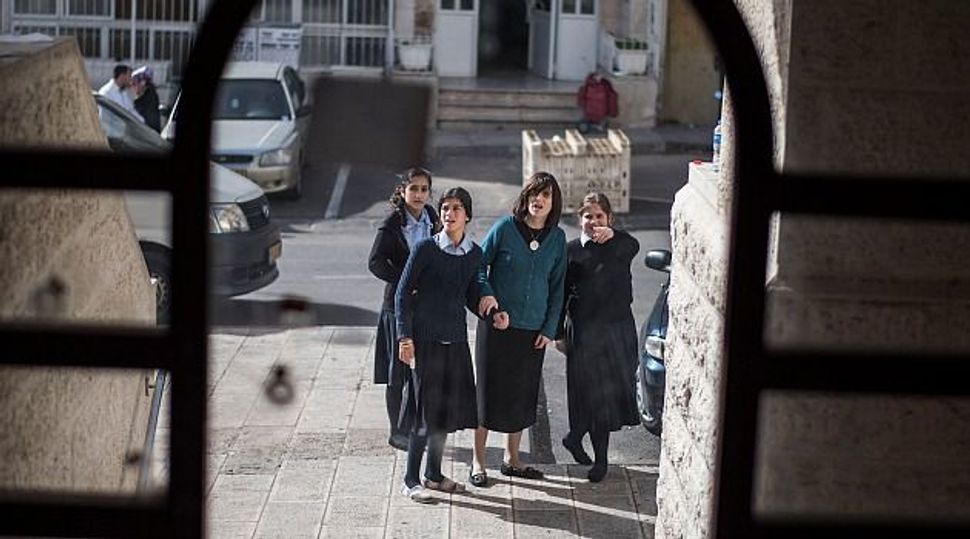 (Reuters) — On edge but faithful to their religious routine, worshippers returned on Wednesday to the Jerusalem synagogue where four rabbis and a policeman were killed in a Palestinian attack a day earlier.

The bloodstains had been washed away. But four memorial candles burned as about a dozen men chanted their daily prayers and police newly stationed outside guarded the Kehillat Bnei Torah congregation.

“It’s a little scary, but we’re going to have to go on with our lives. We’re staying here, we’re not moving anywhere … this terrorist attack is not going to change anything,” said Avraham Burkei, a member of the synagogue in Jewish West Jerusalem.

Palestinians in Israeli-annexed East Jerusalem also voiced concern about their safety amid the surge in violence, as police set up checkpoints in their neighborhoods and tethered surveillance balloons floated overhead.

In the dead of night, a large explosion rattled windows in the city as Israel blew up the home of a Palestinian who last month ran over and killed two people at a Jerusalem tram stop before police fatally shot him.

Pointing to armed police checking cars and pedestrians on a road leading to the center of town, Imram Abu al-Hawa, a 40-year-old Palestinian, spoke of humiliation and concern about revenge attacks.

“They (police) say, ‘do you have a knife, where are you going?’” he said. “They can go to hell. I used to work among Jews, now I’m afraid I’ll get stabbed or attacked (by them).”

Violence in Jerusalem and other areas of Israel and the occupied Palestinian territories has surged since July when a Palestinian teen was burned to death by Israeli assailants in alleged revenge for the abduction and killing of three Jewish teens by militants in the West Bank.

The collapse of U.S.-brokered peace talks, renewed fighting in Gaza in the summer, and continued, internationally condemned Israeli settlement-building on land Palestinians seek for a state have also fanned the flames.

Tuesday’s synagogue attack, in which the rabbis – three of them dual U.S.-Israeli citizens and the fourth a British-Israeli national – were killed along with a Druze police officer by two attackers armed with knives and a gun, was the deadliest in Jerusalem since 2008.

The current wave of violence has defied clear definition – Israeli officials insist it is not a new, tightly organized Palestinian uprising and cannot be compared with the Intifada that raged from 2000 to 2005.

Palestinian suicide bombers blew up Israeli buses and cafes during that period, and Israel carried out crushing military operations in Palestinian towns in the West Bank.

For the most part, security guards who tried to prevent and often died in such bombings are no longer posted at the entrance to restaurants and stores in Jerusalem, but they are a lingering presence outside its main indoor shopping mall.

So when Ayala, a 39-year-old Israeli teacher, wanted to have coffee with a friend on Wednesday, the complex offered a safe haven.

“We’re meeting at the mall because we know there is security here,” said Ayala, who declined to give her last name.

“We’re going on with our lives but with much more caution. We are afraid of the Arabs,” she said. “This is not the first wave of terrorism. Terrorism comes in waves and eventually it ends. It’s deja vu. We understand we are living with people who hate us, deeply.”

For Palestinians, a push by far-right Jews to be allowed, in defiance of a decades-old ban agreed by Israel, to pray at a holy compound where al-Aqsa mosque now stands and Biblical Jewish Temples once stood, has prompted anger and suspicion.

Israel says it has no intention of changing the prayer arrangements at the site and has accused Palestinian leaders of inciting violence. There have been almost nightly clashes in East Jerusalem in recent months between Palestinians throwing rocks and setting off firecrackers and Israeli police firing stun grenades and tear gas.

“It’s gone from bad to worse – it’s never been this bad,” Uday Abu Sbeitan, a 65-year-old Palestinian, said as a police helicopter hovered low over his Mount of Olives neighborhood. “Women are scared for their children at night – that they might be arrested or kidnapped.”