14 Honored for Saving Jews in the Netherlands 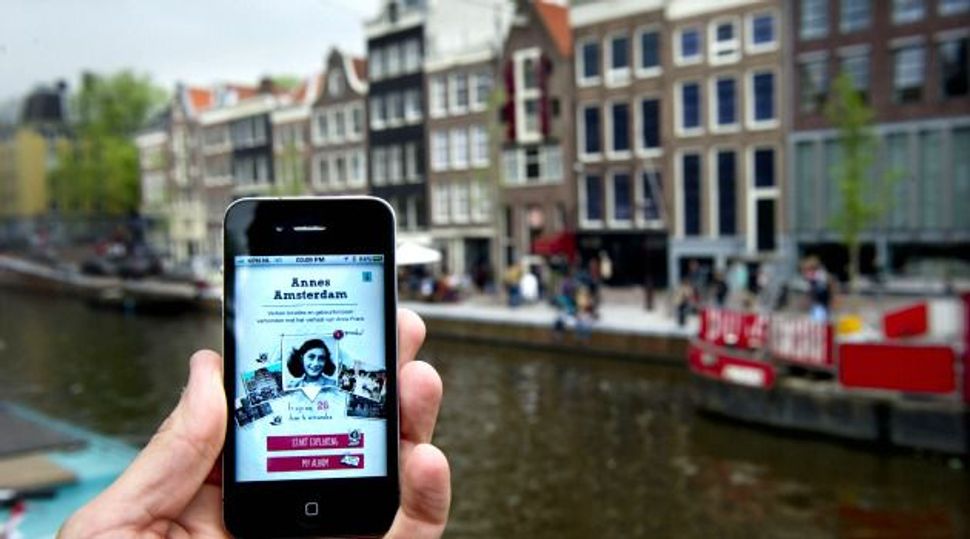 Anne’s Amsterdam: A phone shows an application where the history of Anne Frank can be explored at thirty spots in Amsterdam. Image by Getty Images

Israeli diplomats serving in the Netherlands honored 14 non-Jews who risked their lives to save Jews during the Holocaust.

The title of Righteous Among the Nations — a distinction awarded by the Yad Vashem Holocaust museum in Jerusalem which is often conferred to recipients by Israel’s foreign ministry — on Friday was given posthumously to Frederika Maria Segboer and Christina Segboer — sisters who hid Jews in southern Netherlands and helped them reach safety in Spain.

Frederika’s daughter, Marijke van de Meent-Segboer, accepted the honor at a ceremony in Gorinchem near Rotterdam for her mother and aunt, who directed Jews they hid to the Westerweel group — a ring of resistance fighters who helped smuggle at least 210 Jews out of the Netherlands, as well as hundreds of non-Jews who were wanted by the Nazi occupation forces.

Many of the Jews that the group smuggled to Spain left from there to pre-state Israel.

Earlier this month, the embassy conferred the title posthumously on another 12 recipients during a ceremony in The Hague. There, Israel’s ambassador to the Netherlands, Haim Divon, honored also Cornelia Kloppenburg and her husband, Leenderd Mostard, who worked as a chauffeur near The Hague. During the Holocaust, the couple took in a 4-year-old Jewish child, Micha Konig.

“They saved my life more than once and I will be grateful to them for as long as I live,” said the 75-year-old author Micha Konig during the ceremony at the municipal building in The Hague.

The Netherlands, which used to be home to 140,000 Jews before the Holocaust, has over 5,350 Righteous Among the Nations — more than a fifth of the overall number in Yad Vashem’s records and more than any other country except Poland.

14 Honored for Saving Jews in the Netherlands