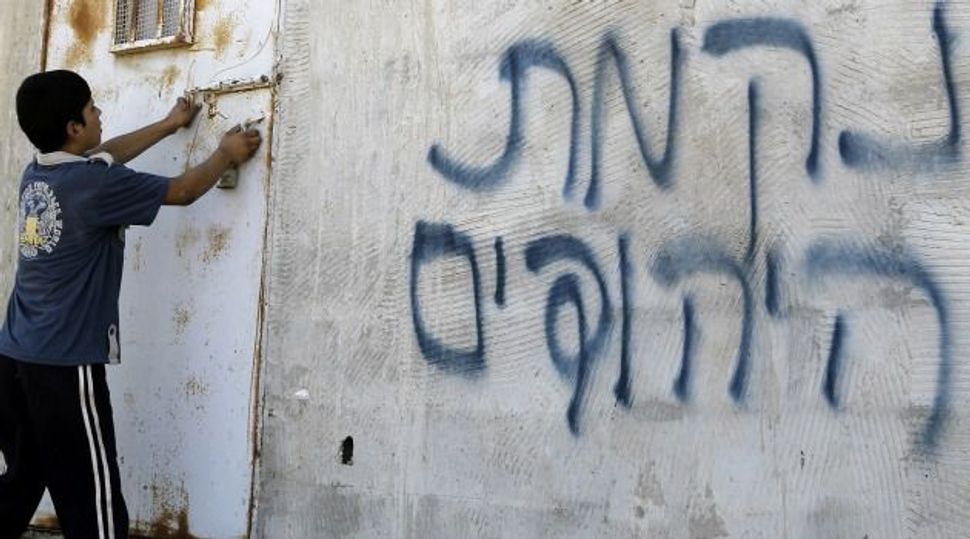 Deja Vu? A Palestinian boy opens a door after Hebrew graffiti was daubed on a wall, allegedly by Jewish settlers, in the West Bank on July 2, 2014. Image by Getty Images

A Palestinian home was torched in the occupied West Bank on Sunday and “Death to Arabs” daubed on a wall in Hebrew, in an attack that its owner blamed on Jewish settlers.

No one was hurt in the fire that gutted the home in the village of Khirbet Abu Falah, near the Palestinian city of Ramallah, local residents said.

The attack came amid a surge in Israeli-Palestinian unrest, fueled in part by a renewed dispute over Jerusalem’s holiest site, known to Muslims as the Noble Sanctuary and to Jews as the Temple Mount.

“The settlers came here and they hit the door, but I refused to open,” said Huda Hamaiel, who owns the house.

She said they then broke a terrace window and hurled a petrol bomb inside.

“Death to Arabs” and another slogan calling for revenge were painted on the home, hallmarks of so-called “price tag” attacks by Jewish extremists against Palestinian dwellings and mosques and Christian church property.

A police spokesman said officers from the nationalist crimes unit were sent to the scene and had begun an investigation.

In deadly street violence in Jerusalem in recent weeks, three Palestinians rammed cars into Israelis and two others went on a gun and knife rampage in a synagogue.

The assailants, all from areas of Jerusalem occupied by Israel in the 1967 war and where the Palestinians claim sovereignty, were killed by police. Nine Israelis and one foreign woman were killed in the attacks.