Floods Cause Emergency in War-Battered Gaza 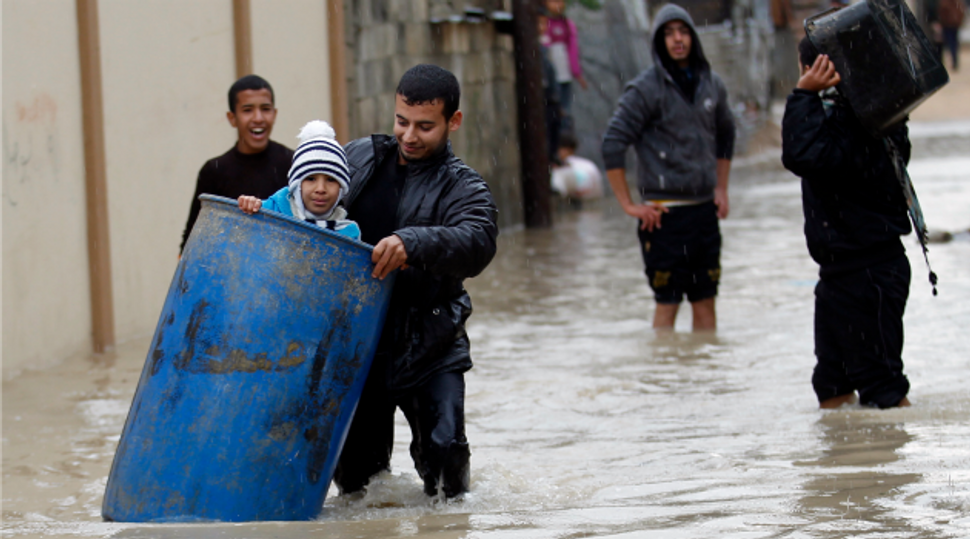 The U.N. agency aiding Palestinians declared an emergency in the city of Gaza following flooding.

No casualties or injuries have been reported but hundreds of residents in the flooded areas have evacuated their homes, according to a statement about that appeared Thursday on the website of the United Nations Relief and Works Agency, or UNRWA. In the statement, the organization declared a state of emergency in Gaza City.

“We are very concerned about such severe storms this early in the season and on the back of unprecedented damage and destruction caused by the recent conflict,” said UNRWA’s director of operations, Robert Turner, in reference to the aftermath of Israel’s Operation Protective Edge. Israel launched the 50-day offensive on Hamas in July following rocket attacks.

On Wednesday, approximately 2’’ of precipitation poured down on Gaza and Israel’s coastal plain within several hours, causing floods that exceeded the drainage capacity of Gaza’s weakened infrastructure. Gaza receives approximately 18” of rain annually.

Some of the worst flooding occurred around the Sheikh Radwan storm water lagoon.

“We are particularly concerned for those families still seeking adequate shelter and preparing for the winter months, and for the impact the flooding is already having on children unable to attend school,” Turner added.

As a precautionary measure, 63 schools in Gaza City are closed Thursday for the afternoon shift, affecting almost 65,000 students. Forty-three schools in the North Area of the Strip are also now closed. Other UNRWA installations are still being assessed, though no damage has yet been reported.

Floods Cause Emergency in War-Battered Gaza