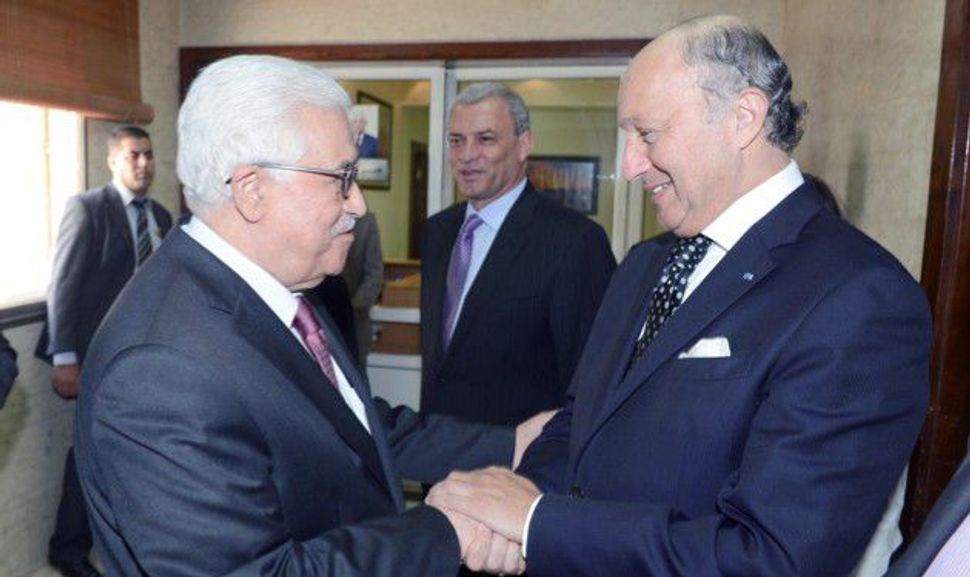 (Reuters) — France warned on Friday it would recognize a Palestinian state if a final international effort to overcome the impasse between Israelis and Palestinians failed, and proposed a two-year timeframe to end the conflict through a U.N.-backed resolution.

Lawmakers will hold a symbolic parliamentary vote on Dec. 2 on whether the French government should recognize Palestine as a state, a move that the Israeli Prime Minister has called a “grave mistake.”

“If this final effort to reach a negotiated solution fails, then France will have to do what it takes by recognizing without delay the Palestinian state. We are ready,” Foreign Minister Laurent Fabius told parliament.

The parliamentary vote has raised domestic political pressure for the government to be more active on the issue. An IFOP poll showed 63 percent of French support a Palestinian state.

Fabius told deputies that, were they to adopt the motion, it would not change Paris’ immediate diplomatic stance.

But he said that, after similar moves in Sweden, Britain, Ireland and Spain, Paris could not ignore the “never-ending” conflict that was playing into extremists’ hands.

“There needs to be support, some would say pressure, from the international community to help the two sides make the final step to peace,” Fabius said.

Palestinians seek statehood in the Israeli-occupied West Bank and blockaded Gaza Strip with East Jerusalem as their capital – lands captured by Israel in a 1967 war.

The latest round of efforts to forge a two-state solution collapsed in April. Palestinians see little choice but to push unilaterally for statehood.

Fabius said Paris was working to get a United Nations Security Council resolution adopted that would relaunch and conclude negotiations within two years.

Diplomats have said France, Britain and Germany are preparing a text that could be accelerated if a separate resolution drafted by Palestinians, and calling for an end to Israeli occupation by November 2016, is put forward.

“We must fix a calendar because without one how do you convince anybody that it won’t just be another process?” Fabius said.

He proposed that in parallel a conference be held with regional actors, European Union, Arab League and major powers.

He did not specify at what stage France could decide to back a Palestinian state, but a diplomat said that it could happen anytime if Paris felt negotiations were dead.

France does not classify Palestine as a state, but has supported Palestine’s membership of UNESCO and its non-member observer country status at the United Nations.