French Jews Flock to Montreal To Build a New Life 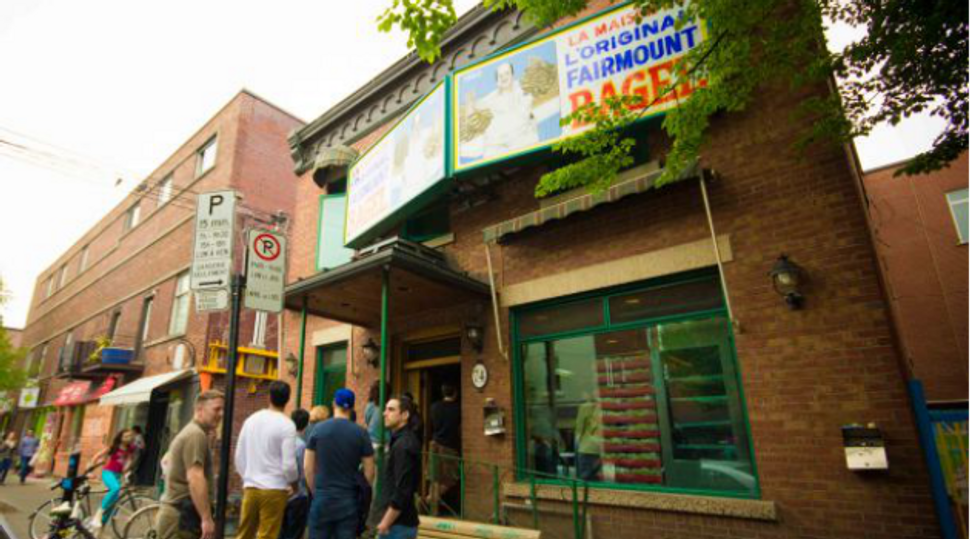 When Dan Charbit and his wife, Gaelle Hazan, moved to Montreal from Paris two summers ago, it was meant to be a temporary fix — a year-long attempt for Charbit to reboot his stalled career as a special-effects artist in Quebec’s thriving film and television industry. They agreed to fly home if the experiment failed.

Fourteen months after arriving in Canada, the couple has no desire to return to France. The 43-year-old Charbit, who won an Emmy earlier this year for work on the fourth season of the hit HBO show “Game of Thrones,” started a new job last month as a supervisor at Mokko, a Montreal-based special-effects studio serving the film and television industries. Hazan, 39, has found employment as a construction project manager.

Charbit and Hazan are part of a new wave of French Jews who have resettled in French-speaking Quebec, fleeing France’s dismal unemployment rate, which hit 10.5 percent in September, as well as the shock of anti-Semitism that has reverberated throughout the country in recent months and crested over the summer during waves of anti-Israel demonstrations.

France’s Jewish Community Protection Service reported 527 anti-Semitic incidents in the first half of 2014, compared with 276 in the same period last year. In recent months — and especially in the wake of the most recent Gaza war — there have been incidents of Jews being harassed, even physically assaulted, in the streets, and synagogues and Jewish-owned stores and restaurants being torched. And notably, in 2012, four people, including three children, were killed during a shooting rampage at a Jewish school in Toulouse.

While Israel remains the destination of choice — 5,063 French Jews made aliyah between Jan. 1 and Sept. 30, according to the Jewish Agency for Israel, the most from any European country — Quebec, and its largest city of Montreal in particular, is quietly becoming a popular alternative for émigrés.

“I hear and I know of young couples moving to Quebec,” said Serge Cwajgenbaum, the Lyon, France-born secretary general of the European Jewish Congress. “The reason is not necessarily related to the rise of anti-Semitism, but it’s more to find a proper future, in terms of good work, good salaries and a cheaper way of life.” There are some 90,000 Jews in the Montreal metropolitan area.

Jews are not the only French citizens resettling in Canada. Overall French immigration to Quebec has skyrocketed since 2011, when Canada last conducted its National Household Survey. The French consulate in Montreal told the Canadian Press earlier this month that 55,000 French citizens had notified it of their residence in the city, a 45 percent increase from 2005. Since immigrants are not required to register upon arrival, the consulate estimated the actual number of French citizens in Montreal could be as high as 110,000.

Although up-to-date data on French Jewish immigration does not exist, Monique Lapointe, director of Agence Ometz, Montreal’s primary Jewish social services and resettlement organization, told JTA she has noticed a significant increase in newcomers, especially over the past year. Inquiries, Lapointe said, have poured in through Ometz’s email system and Facebook page — including from French Jews currently living in Israel.

“I wouldn’t say it’s a huge number of [immigrants],” Lapointe said. “But it’s a trend. We’ll be anticipating more.”

Lapointe described the average immigrant as single, between the ages of 25 and 35, “very well educated and looking for a new kind of life.” The wider Montreal Jewish community, Lapointe said, is now in the early stages of crafting a coordinated approach to handle the inflow. Thus far, it has been difficult to track newcomers, she added, partly because French Jews keep looser ties to Jewish community organizations than do their North American counterparts.

“In France, people don’t talk about Jewishness,” Lapointe said. “They’re not used to community organizations. Some will never come to see us. They don’t have this reflex.”

Montreal’s cheaper rents and relatively low cost of living are as much a draw for French Jews as the familiar language and secular Francophone culture. In a focus group of French nationals conducted last year, Ometz identified four reasons Jews were moving out of France. The new immigrants pointed to a higher quality of life in North America, a greater openness toward immigrants and shrinking job opportunities for a younger generation of French citizens back home. Families with children also reported a fear of anti-Semitism, and anxieties about their ability to practice Judaism safely amid a rise in anti-Semitic rhetoric and attacks.

For Julie Weill, a 31-year-old mother of three, the decision to leave her home in Strasbourg five years ago was prompted by the increasing sense of unease she and her husband, Nathanael, felt as Jews in France. While the modern Orthodox couple was never victimized by anti-Semitism, they heard stories from friends and family, and it was considered dangerous, Weill said, to walk around downtown Strasbourg wearing a yarmulke.

When it came time for Nathanael to choose a post-doctoral fellowship in bioinformatics, the Weills declined compelling offers from European schools and instead chose McGill University, in Montreal. They found the prospect of raising a religious family in Europe too unsettling.

“We wanted a place with a strong Jewish community, with Jewish schools, a place you can practice freely, where you feel safe,” said Weill, whose synagogue in Montreal is run by another French immigrant from Strasbourg.

Quebec has struggled with its own, albeit minor, resurgence of high-profile anti-Semitism. During a provincial election campaign last spring, Louise Mailloux, a candidate from the separatist Parti Quebecois, publicly dredged up the longstanding “kosher tax” canard, claiming that kosher-certified products are sold at higher prices on supermarket shelves, with Jewish interest groups collecting the surplus. And in August, Gilles Proulx, a prominent Montreal columnist and television host, told a local radio station that Jewish communities worldwide “provoke the hatred” of their host countries.

Cwajgenbaum also noted that Quebec’s Muslim population — roughly 221,000 of the 3.8 million residents in the Montreal metropolitan area — as a cause for concern; France’s Muslims, of which there are roughly six million, compared with 500,000 Jews, are routinely fingered as culprits in the upsurge of anti-Semitism.

Cwajgenbaum said the integration of immigrants from the Arab world has been more successful in Quebec than in France, but speculated that the province may one day face similar problems from its swelling Muslim minority. When a delegation of Quebec Jews visited Paris nearly a decade ago, searching for prospective immigrants, Cwajgenbaum told them with metaphorical flourish, “To transfer a sick man from one hospital to another one will not cure the sickness.”

The data, however, suggests that Quebec anti-Semitism is on the wane. Last year the province saw its number of reported anti-Semitic incidents fall to 250, a nearly 26 percent drop from 2012, according to B’nai Brith Canada, which tracks anti-Semitic activity across the country.

Weill still finds it difficult to let her two boys, who attend a Sephardic Jewish day school, wear yarmulkes in public, an old habit from the family’s life in Strasbourg. But the concern, she acknowledged, is largely “irrational.”

Charbit and Hazan, both non-observant, have also felt a difference in Quebec society treats its Jewish community. “In France, you don’t put your mezuzah outside,” Charbit said. “Jewish life in Montreal is safer.”

French Jews Flock to Montreal To Build a New Life