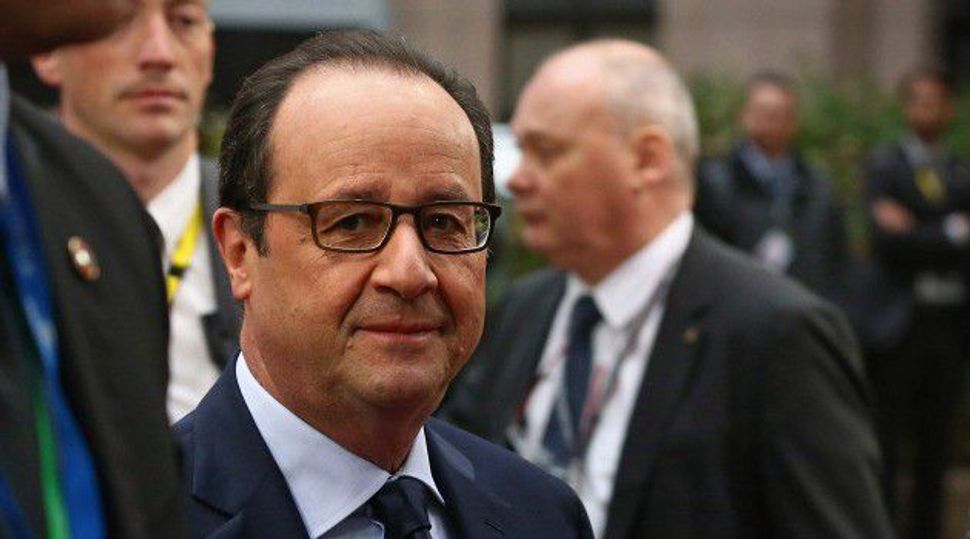 Francois Hollande’s Socialist Party is backing a parliamentary measure calling for recognition of a Palestinian state. Image by getty images

The CRIF umbrella of French Jewish communities called on French Jews to refrain from protests against the parliament’s vote on recognition of Palestinian statehood.

The nonbinding vote, which is scheduled for Tuesday at the National Assembly, prompted some 250 protesters, most of them Jewish, to demonstrate on Friday near parliament with posters reading “Hamas+Fatah=Terrorist state,” among other slogans.

CRIF President Roger Cukierman told the Liberation daily that he was opposed to how “a part of the community so quickly goes out to protest on the street at every occasion.” He added that “what is needed is calm, dialogue and negotiation.”

Last month, CRIF warned in an unusual statement that the vote risked worsening France’s anti-Semitism problem, which the umbrella group said had reached new heights during Israel’s operation in Gaza this summer.

Tuesday’s vote is on a draft motion that Socialist Party lawmakers submitted last month following the passing of similar motions in Britain’s House of Commons and the Irish upper house.

The demonstration on Friday was organized by a coalition of French Jewish organizations, including groups that do not belong to CRIF such as the National Bureau for Vigilance Against Anti-Semitism, or BNVCA, Siona and the French LDJ — the local Jewish Defense League counterpart — and Beitar.

According to the left-leaning Liberation daily, the protesters would not let journalists from AFP near their gathering to punish the French news agency for its coverage of Israel, which some protesters said was biased.

“Following the disgraceful coverage of the attack on the synagogue in Jerusalem, AFP journalists were ejected from the demonstration,” LDJ wrote on its official Twitter account, referring to the Nov. 18 terrorist attack that killed five.

French lawmakers Meyer Habib and Claude Goasguen, who oppose immediate recognition of Palestinian statehood, met the protesters. Both are from centrist parties — Habib from UMI and Goasguen from UMP.

“Recognizing a Palestinian state is recognizing Hamas,” said Habib, who urged protesters to gather outside parliament during the vote.

Separately, a lawmaker for UMP at the European Parliament, Nadine Morano, told the France Info radio on Friday that recognizing a Palestinian state was tantamount to recognizing the Islamic State jihadist group also known as ISIS or ISIL.