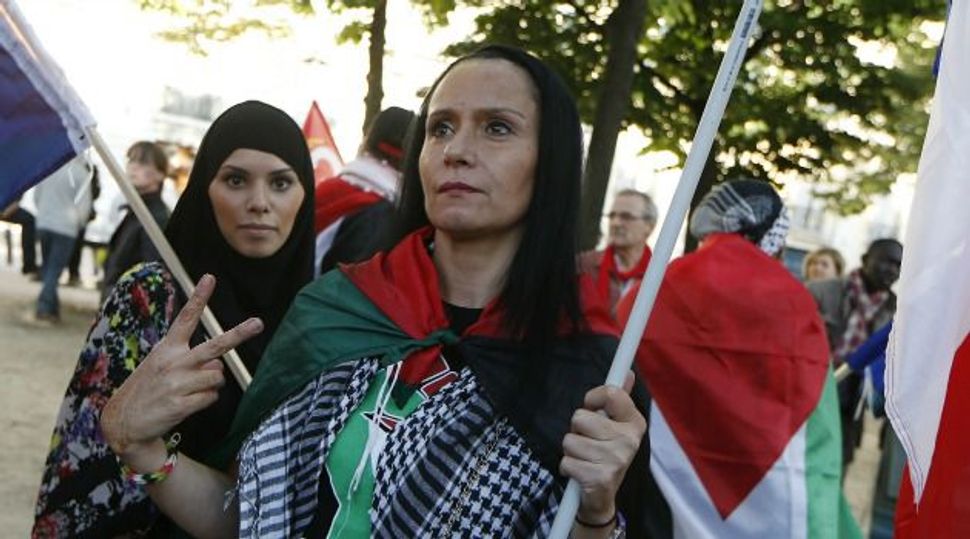 On Tuesday, the National Assembly voted 339 to 151 in favor of the largely symbolic motion that “invites the French government to use the recognition of the state of Palestine as an instrument to bring about a definitive resolution of the conflict.” It also says that Jerusalem should be the shared capital of Israel and a future Palestinian state.

Israel’s embassy in Paris called the vote “an error that sends the wrong message to the peoples of the [Middle East],” but added that “the consistent policy of the French government remains unchanged: Only a negotiated solution will terminate the conflict.”

Some Jewish groups protested the vote, arguing that French recognition of a Palestinian state could further fuel anti-Semitism in the republic, which has seen a sharp rise in anti-Semitic attacks this year. In the third such rally in a month, hundreds of French Jews gathered outside parliament to voice their disapproval of the nonbinding draft motion submitted last month by France’s ruling Socialist Party.

Senate representatives of France’s Communist Party and the country’s green parties filed separate but similar motions, which are scheduled to be voted on Dec. 11.

The vote follows similar motions passed last month by parliaments in Britain and Ireland. By contrast, those votes generated neither major protests nor warnings that recognition would exacerbate anti-Semitism. In France, however, many Jews are reeling from an uptick in anti-Semitic attacks, some of them violent — and many of them perpetrated by French Arabs who targeted Jews last summer amid Israel’s war with Gaza.

“In Britain, in the United States, the question is about foreign policy, but for us French Jews it’s a matter of domestic security,” said Sammy Ghozlan, founder of the National Bureau for Vigilance Against Anti-Semitism watchdog group, which helped organize demonstrations against France’s parliamentary vote.

“For the past 15 years, we have been beaten, intimidated and threatened — sometimes orphaned — by terrorists who acted in correlation with events in the Middle East,” he said, adding that for the perpetrators of these incidents, “French recognition of a Palestinian state is a pat on the back, a sign that they are on the right track.”

Roger Cukierman, the president of the CRIF — France’s federation of Jewish organizations and communities — warned last month that the vote risked worsening anti-Semitism in France. Some 527 anti-Semitic incidents were documented there between January and August of this year, compared to 276 in the corresponding period in 2013. But Cukierman recently told the French daily Liberation that he opposed rallies against the vote, instead favoring “dialogue and negotiation.”

Ghozlan, however, whose group is considered more right-wing than CRIF, said that “unilaterally recognizing a Palestinian state is recognizing terrorism because Hamas is part of that state’s government.”

By contrast, some French Jews cited the summer war in supporting the vote.

David Chemla of the Paris office of JCall, a left-of-center European Jewish lobby similar to the American organization J Street, cosigned a declaration of support on Monday for recognition. To those who blame recognition initiatives for terror, JCall’s declaration invoked the words of the late Israeli prime minister Yitzhak Rabin: “We must fight terrorism as if there’s no peace process and pursue peace as if there’s no terrorism.”

Other French Jewish groups, like Europe-Israel — a pro-Israel media watchdog and activist group — linked the vote not only to anti-Semitism in France but also likened recognition of a Palestinian state to backing statehood for the Islamist terrorist group ISIS.

Ahead of the vote, Europe-Israel released a 2-minute video juxtaposing scenes from recent anti-Semitic riots in Paris with executions in Iraq and Gaza. Titled “Stop the barbarism,” the video ends with the caption “All united against the Socialist motion in support of a Palestinian terrorist state.”