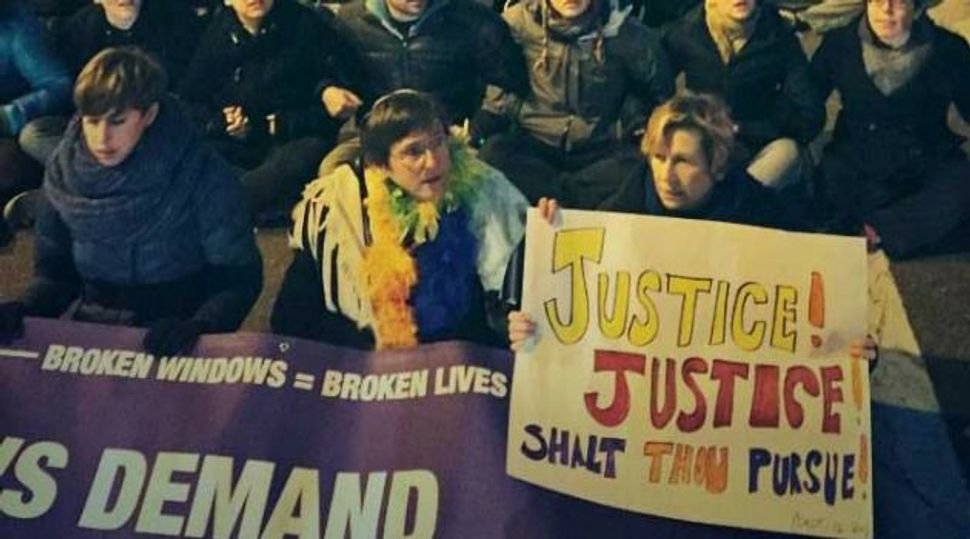 Several prominent rabbis and the president of a national teachers union were arrested Thursday night while protesting police brutality.

Rabbis Sharon Kleinbaum, Jill Jacobs, and Shai Held, along with Randi Weingarten, the president of the American Federation of Teachers, were taken into custody for blocking traffic to protest a grand jury’s decision not to indict the New York police officer who choked Staten Island resident Eric Garner to death. The protests, held on Manhattan’s Upper West Side, were organized by the organization Jews for Racial and Economic Justice.

Kleinbaum is the longtime rabbi at Congregation Beit Simchat Torah, the country’s largest LGBT synagogue, and is also Weingarten’s partner. Directly before the protest, she was honored by JFREF with a Marshall T. Meyer Risk Taker Award at nearby Congregation B’nai Jeshurun.

Attendees at the ceremony read the names of more than 20 black males who had been killed by New York police, followed by the phrase, “I am responsible.” They then marched to the nearby intersection at 96th and Broadway — blocking traffic and holding protest signs.

Protesters recited the mourner’s kaddish along with chants and songs. A video of the group saying kaddish can be seen here.

Jacobs is the executive director of T’ruah: The Rabbinic Call for Human Rights and a prominent social activist. Arrestee Held is co-founder and dean of the educational organization Mechon Hadar and teaches at the Jewish Theological Seminary.