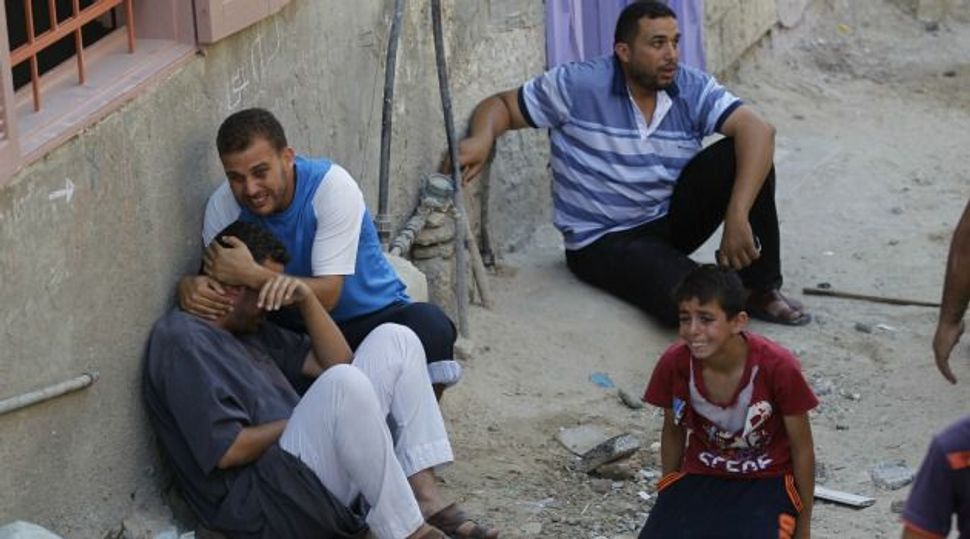 Under Fire: Palestinians sitting on a street react after a deadly Israeli air strike that targeted their house in the town of Khan Yunis in the Gaza Strip. Image by Getty Images

The Israel Defense Forces has opened criminal investigations into eight deadly incidents that occurred during its 50-day Gaza operation.

The investigations, announced Saturday night by the IDF Magistrate Advocate General, involve the deaths of 30 Gazan Palestinians, including 27, believed to be mostly civilians, killed in a July 20 air strike on the home of the Abu Jama family in Khan Younis in southern Gaza.

Some 13 cases are currently under investigation. About 85 incidents are under “various stages of review,” according to the IDF.

The IDF also announced Saturday that seven other cases were closed in which the investigation “did not find that the forces’ actions in these reported incidents appeared to substantiate reasonable grounds for suspicion of criminal behavior, and therefore there is no basis for an investigation.”

The Fact Finding Assessment Mechanism was established during the summer’s Gaza conflict to investigate individual incidents and decide if a criminal investigation is warranted. The mechanism is also a lessons–learned process and operational recommendations will be issued to “assist in preventing exceptional incidents in the future,” Maj. Gen. Danny Efroni, the commander of the MAG Corp. and the army’s chief legal officer, who appointed the fact finding commission, said in a statement.

More than 2,100 Palestinians were killed in the Gaza operation, according to figures furnished by Gaza institutions. Some 67 Israeli soldiers were killed, as well as six civilians in Israel.