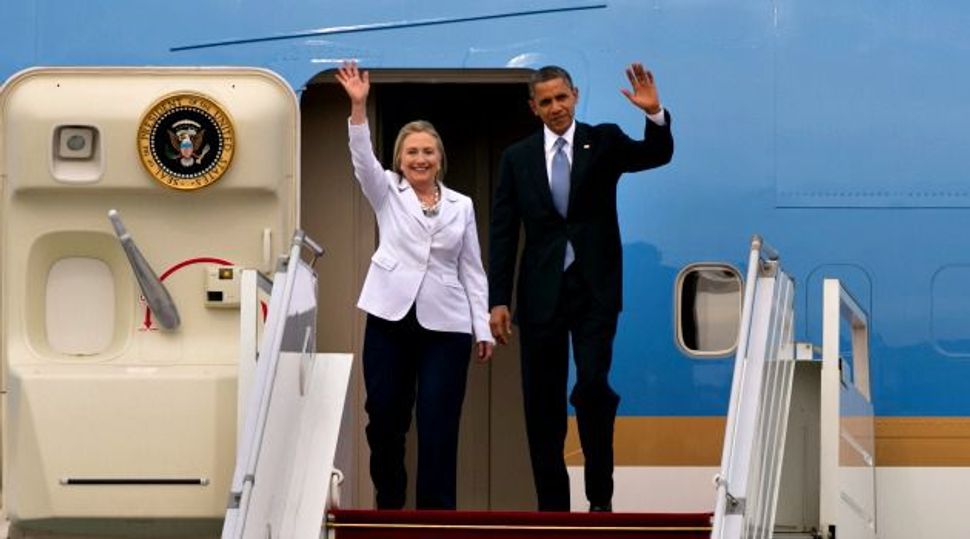 Clinton, who was Obama’s secretary of state during his first term, spoke Friday night with Haim Saban, the Israeli-American entertainment mogul who through the Brookings Institution convenes an eponymous annual forum of Israeli and American leaders. Saban has been a backer of Clinton and her husband, former President Bill Clinton.

Her talk was notable for the degree to which she endorsed Obama’s policies. Clinton derided perceptions that U.S.-Israel tensions had become tense under Obama.

“Nobody can argue with the commitment of this administration to Israel’s security,” she said when Saban pressed her on the perceived tensions.

Clinton, a likely contender for the 2016 Democratic presidential nomination, has been perceived since leaving the government as distancing herself from Obama — notably in her strident defense of Israel this summer during its war with Hamas in the Gaza Strip. Obama officials criticized some Israeli actions as excessive.

She forcefully endorsed the Israeli-Palestinian peace talks aggressively advanced by the Obama administration and resisted by the two sides. Their absence, Clinton said, created dangers for Israel and “leaves a vacuum that is filled by bad actors, threats.”

Clinton deemed as “essential” the two-state solution sought by her successor as secretary of state, John Kerry.

The nuclear talks with Iran had effectively suspended its weapons program, she said, and the Obama administration had managed to sustain international support for sanctioning Iran as a means of keeping the Islamic Republic at the talks.

Clinton anticipated a U.S. security umbrella for Gulf Arab states as a means of reassuring them about Iran’s intentions, but said membership in the group would be predicated on a “non-aggression pact” with Israel.

Speaking after Clinton was Yitzhak Herzog, the leader of Israel’s opposition Labor Party. Herzog, who described parts of his campaign platform ahead of Israeli elections early next year, said he was likelier than Netanyahu to conclude a deal with the Palestinians and to improve relations with the United States.

“I don’t believe in the biblical proverb that says a people who dwells alone,” he said, referring to the passage in Numbers that ends “shall not be reckoned among the nations.”

“We can’t in this era dwell alone,” Herzog said.

On Saturday, Vice President Joe Biden strongly defended the Obama administration’s record on Israel, saying that because he was perceived as friendlier to Israel than the president, he often fielded complaints about Obama’s alleged coldness to Israel.

“There’s no doubt in President Obama’s mind” about his “ironclad” commitment to Israel, Biden said.

Biden added that U.S. officials coordinated closely with Israel on Iran policy, saying that Israeli officials were present for “every jot and tittle” in the policy.

“We will not let Iran acquire a nuclear weapon, period,” he said.

Biden appealed to the pro-Israel crowd to tone down talk of tension between the governments.

“Let’s not make more of what are normal disagreements between friends than warrants,” he said.

The vice president called on Israelis and Palestinians to refrain from actions that could increase tensions, citing incitement on the Palestinian side and what he called the “collective punishment” of the Israeli practice of demolishing the homes of terrorists.

Biden also expressed concern about what he said was increased anti-Semitism worldwide, including efforts to delegitimize Israel.

“There’s no threat that worries me more than the rising tide of anti-Semitism,” he said.

Much of the conference was off the record, but Martin Indyk, who returned to the Brookings Institution this summer after shepherding the latest failed attempt to return Israelis and Palestinians to the peace path, and Naftali Bennett, Israel’s economics minister and a popular right-wing figure, agreed to make their debate on the record.

The heated exchange was focused on Bennett’s rejection of Palestinian statehood. Indyk and Bennett each called the other deluded.

“How many people need to die in our country before you wake up from this illusion?” Bennett asked Indyk.

Indyk also pressed Bennett on past comments in which the Israeli said John Kerry, the U.S. secretary of state, encouraged terrorism and “amplified” anti-Semitism. Apparently chastened, Bennett said there were things he regretted saying and added that Kerry was a friend of Israel.