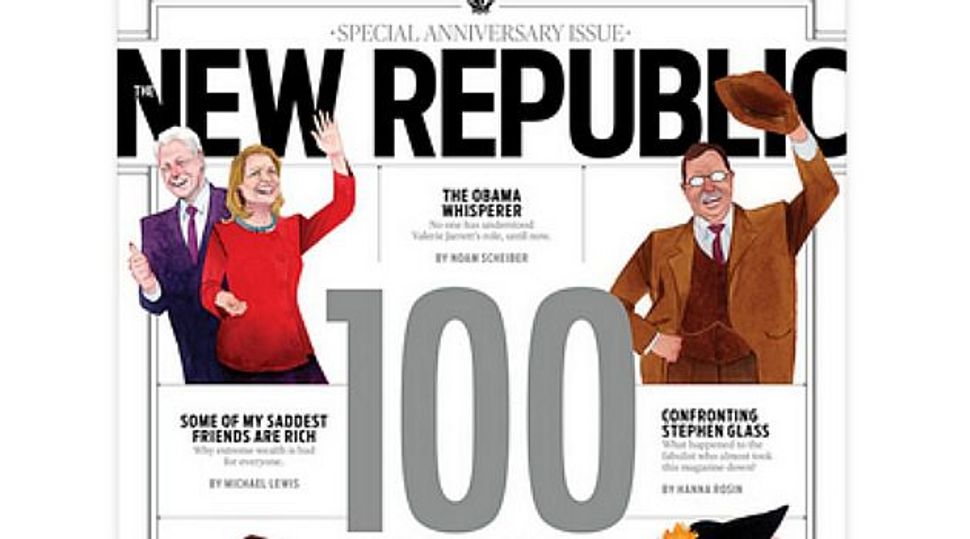 (JTA) — The departure of most of the editorial team at The New Republic – including Franklin Foer, Leon Wieseltier, Judith Shulevitz and Julia Ioffe – didn’t just blow a hole in the landscape of American journalism. It also threw into doubt the future of what has long been a primary address for American Jewish thought.

The New Republic celebrated its 100th anniversary last month, and for much of the magazine’s history – particularly since Martin Peretz took over in 1974 – it has been one of the elite American media outlets with a strong focus on Zionism and Jewish intellectual life.

Now in the wake of the decision by owner Chris Hughes to replace Foer, the executive editor, with Gabriel Snyder of Bloomberg Media — and formerly of Gawker and The Atlantic Wire — The New Republic’s identity is now in doubt. Many of the magazine’s former mainstays worry that its DNA, including its engagement with Jewish life, is in question, with nothing on the secular landscape to replace it.

“It does leave a void,” said David Greenberg, a former acting editor at the magazine who surrendered his contributing editor title on Friday, and an associate professor of history and of journalism and media studies at Rutgers University. “It’s hard to imagine without Marty [Peretz] and Leon [Wieseltier, the former literary editor] and Frank [Foer] there, that the new regime will give much thought to these issues at all.

Evidence of The New Republic’s Jewish DNA could be seen in the lists that have circulated on the Internet of the approximately 60 percent of the masthead who quit. Easily half are Jewish – including Foer and Wieseltier, whose resignations on Thursday under pressure from management triggered the general exodus – and many have written about their own Jewish lives.

A number of prominent Jewish staffers at the New Republic have gone on to greater prominence at other publications.

Michael Kinsley, an editor under Peretz, was the founding editor of Slate, one of the first influential online magazines. Peter Beinart, who also led the magazine under Peretz, became a prominent voice on American Jewish criticism of Israel with the publication of his book “The Crisis of Zionism” in 2012. Jonathan Chait, a longtime New Republic writer, now writes on politics at New York magazine. Hanna Rosin, a former staff writer, went on to co-found Slate’s women’s issues vertical, Double X, and to write the 2012 book “The End of Men.”

But the Jewish identity of the New Republic runs much deeper. One of its co-founders was Walter Lippmann, a German Jew, albeit a secular one. Peretz noted in an interview that one of the magazine’s early intellectual patrons was Louis Brandeis, a Jewish Supreme Court justice and a leading Zionist, and one of its early editors, Horace Kallen, was part of a circle of New York Jewish intellectuals. It was a group that included Morris Raphael Cohen and Marvin Lowenthal, who flourished in the 1910s and ’20s and published in the New Republic.

The magazine subsequently continued to engage with Jewish concerns — in December 1942, for example, Varian Fry wrote one of the first reports on the Holocaust, titled “The Massacre of the Jews.” But Peretz said that by the time he took over in the 1970s, the magazine’s engagement with Jewish issues had faded significantly.

“There was nothing inherent and, in fact, some of the staff was, I would say, from hostile to utterly indifferent” to Jewish concerns, Peretz told JTA.

Peretz, a former Harvard lecturer who purchased the magazine and installed himself as both its publisher and editor in chief, brought to it a passionate interest in Yiddish, as well as an intense, often hawkish, Zionism. The magazine’s Jewish focus intensified in 1982 when Peretz hired Wieseltier, himself a scholar of Jewish history and mysticism, to edit the arts and culture section.

Under their leadership, The New Republic flourished as a center for Jewish writers on Jewish subjects. Authors such as Primo Levi, Robert Alter and Ruth Wisse wrote on topics ranging from the Holocaust to biblical scholarship, from Yiddish literature in translation to the State of Israel from perspectives across the political spectrum. It also published a number of Israeli writers, including Benny Morris, Moshe Halbertal and Anita Shapira.

The magazine also came to serve as a sort of successor to the mid-century journals, like The Partisan Review and Commentary, that had served as homes to Jewish public intellectuals. Wieseltier famously joked that The New Republic saw itself as “a sort of Jewish Commentary” – the joke being that Commentary, which was founded by the American Jewish Committee and continues to publish, is explicitly Jewish.

The New Republic was never explicitly or exclusively Jewish, either in its staffing or its focus, and it was defined as much, if not more, by its self-declared (albeit idiosyncratic) liberalism. Still, it retained what Berman described as a “Jewish sensibility,” and became a center for young Jewish writers and journalists.

Writers who were on staff until last week and primarily wrote on other subjects have published articles, and even books, about their own Jewish experiences. They include science editor Judith Shulevitz, whose book “The Sabbath World” explores her relationship with the Jewish Sabbath; senior editor and economics correspondent Noam Scheiber, who published an article about speaking Hebrew with his daughter; and Foer, who co-wrote “Jewish Jocks” with Marc Tracy, a former staff writer and an alumnus of the online magazine Tablet.

At the same time, other writers have seen The New Republic as a narrow and at times blinkered, even bigoted, institution. In an essay published this week in The Atlantic, Ta-Nehisi Coates wrote, “If one were to attempt capture the ‘spirit’ of TNR, it would be impossible to avoid the conclusion that black lives don’t matter much at all.” He added, “TNR might have been helped by having more — or merely any — black people on its staff.”

Coates reported that he was only able to identify two black staffers who worked on the magazine in recent decades.

In 2012, following years of financial instability, as well as controversial comments by Peretz widely regarded as bigoted against Arabs, Peretz and his fellow investors sold the magazine to Hughes, a co-founder of Facebook. Although Hughes rehired Foer and retained Wieseltier, observers noted a shift in its focus on Jewish issues.

“Chris Hughes really has a different sensibility than Marty Peretz,” said Shulevitz, who just stepped down from The New Republic. “He didn’t have the lightning-like focus on Israel and foreign policy that Marty did.”

It is unclear what the editorial voice of the magazine will be going forward. The New Republic hasn’t announced any significant hires and said recently that it was postponing the December issue until February. A request for comment directed to the magazine’s media department was not returned.

JTA also emailed Snyder requesting an interview but did not immediately receive a response.

Unclear also – at least on Jewish issues – is whether any other publication can fill the void, though several writers, such as Shulevitz and Greenberg, have pointed to Tablet as a burgeoning center for Jewish thought.

Meanwhile, former New Republic devotees worry that it will be an intellectual shell of its previous self.

Said Greenberg, “It’s hard to think it’s going to have any impact on anybody, let alone Jewish life.”