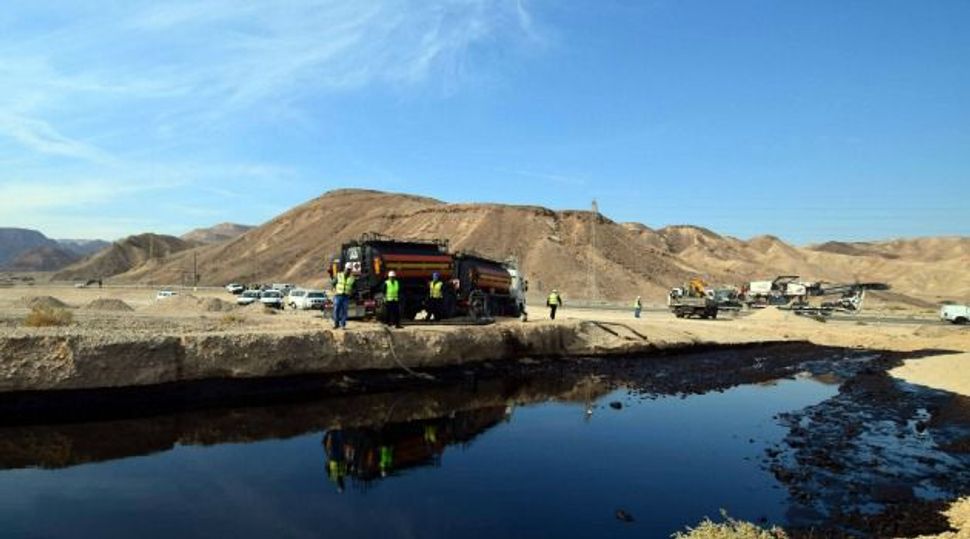 Ecologists said on Wednesday it could take years to clean up a massive oil spill that flooded an Israeli nature reserve with up to five million liters of crude and threatened to spread to the Red Sea shore and neighboring Jordan.

A breached pipeline started spewing oil into Evrona desert reserve – famed for its rare deer and douma palms – a week ago, causing what experts called the worst spill in Israel’s 66-year history.

Clean-up teams have started sucking up the slick and have dug pools and erected barriers to stop it spreading further. But they warned that any rainfall could swell the black streams and overwhelm their defenses.

After the clean-up, experts would still have to deal with the damage caused to the fragile environment, they added.

“How exactly do you take care of a deer that is running and limping because of the oil? … How do you clean the vegetation? This is very complicated business,” Roey Talbi, an ecologist with Israel’s Nature and Parks Authority, told Army Radio.

“We don’t have experience with something of this scale. Clean-up could take months, it could take years,” said Tali Tenenbaum, a spokeswoman for the Nature and Parks Authority.

The breach occurred during maintenance on the pipeline between the city of Eilat on the Red Sea and Ashkelon on the Mediterranean coast, about 18 km (12 miles) north of Eilat, near the border with Jordan.

Between 3 and 5 million liters of oil leaked, of which about 2 million have since been drained with suction equipment, said the Eilat Ashkelon Pipeline Company which owns the line. Some 20,000 tons of contaminated earth has been removed.

EAPC, a state-run company, is funding the clean-up and is considering bringing in foreign experts to help with rehabilitation, a spokesman said.