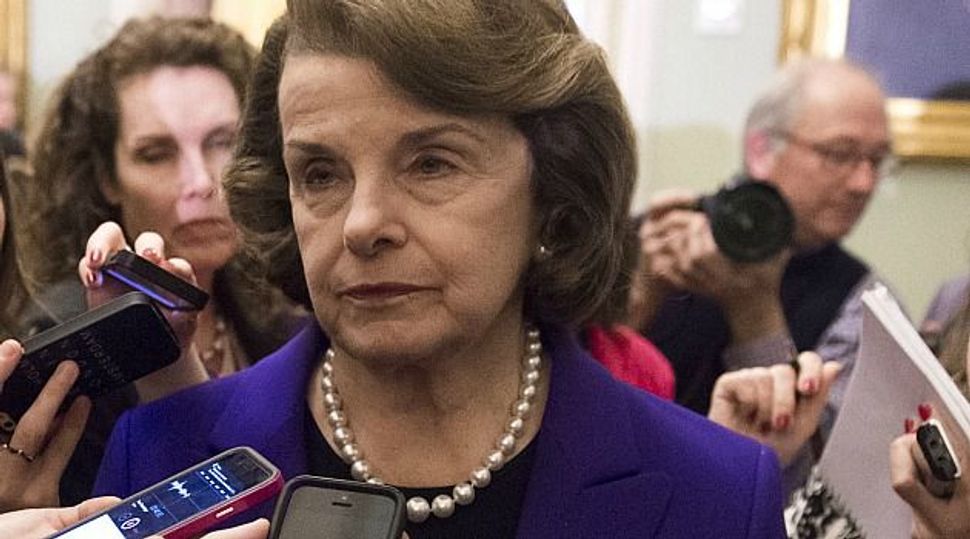 Hard Truths: Sen. Dianne Feinstein is one of several Jewish lawmakers to express dismay at the revelations that American operatives tortured detainees. Image by getty images

“The CIA’s actions a decade ago are a stain on our values and our history,” Sen. Dianne Feinstein (D-Calif.), the chairwoman of the Senate Intelligence Committee, said in floor remarks Tuesday after the release of the report on torture she had authorized.

“Releasing this report is an important step to restore out values and show the world that we are in fact a just and lawful society,” she said.

A number of leading Republicans had opposed the report’s release, saying it could lead to attacks on U.S. interests abroad, but Democrats and a minority of Republicans led by Sen. John McCain (R-Ariz.), a survivor of torture while he was a prisoner of war in Vietnam, said its release was necessary.

Sen. Ben Cardin (D-Md.) was among an array of Jewish Democrats to release statements Tuesday welcoming the report and expressing dismay at its revelations.

“The exhaustive report from the Senate Intelligence Committee documents that the CIA’s enhanced interrogation techniques were not effective and violated international commitments and the core principles of the United States,” Cardin said.

“It also resulted in fabricated information and did not lead to the collection of imminent threat intelligence,” he said. “Years may have passed by since these egregious activities occurred, but the United States must confront the mistakes that were made as we responded to the devastating 9/11 attacks.”

Also welcoming the report’s publications were the Interfaith Action for Human Rights, an alliance of faith leaders whose executive director is Rabbi Charles Feinberg, and the National Religious Campaign Against Torture, which includes among its affiliates the Reform and Reconstructionist movements along with T’ruah: The Rabbinical Call for Human Rights.

“As a nation, we have much to repent for – and true teshuvah, repentance, requires both acknowledgement and accountability for what we have done,” Rabbi Jill Jacobs, the T’ruah director, said in a statement. “The report is a step toward acknowledgement. A step toward accountability would be for Congress to act to make clear that the CIA will never be allowed to torture again.”

Haaretz reported that a section of the report describes CIA officials at one point considered citing a 1987 Israeli commission that recommended “moderate physical pressure” in “ticking bomb” scenarios as a means for making the case for torture among lawmakers. The Israeli Supreme Court in a landmark 1999 decision banned many of the 1987 report’s recommendations.