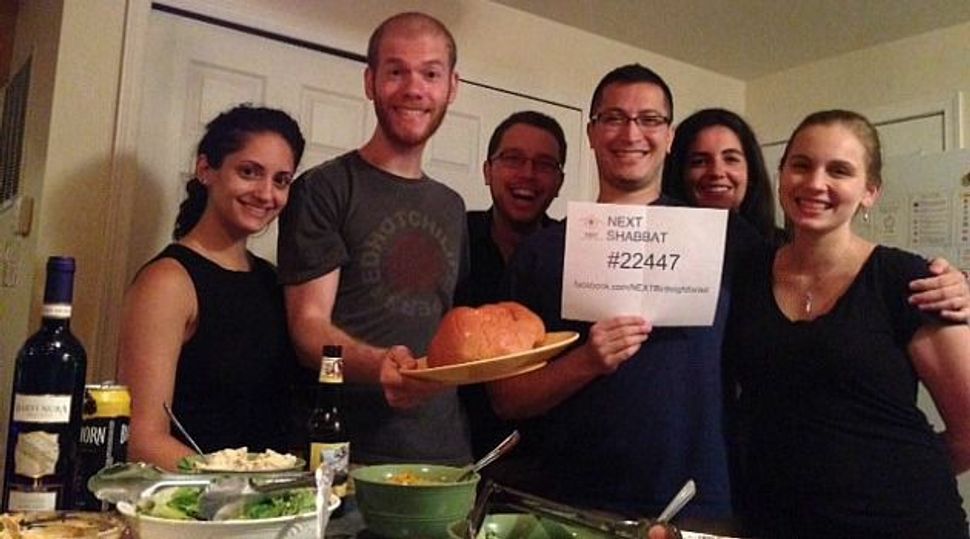 Image by birthright next

After 20,000 dinners, the alumni network for Taglit-Birthright Israel, the program that takes young Jews on free identity tours to Israel, is turning out the lights on its subsidized holiday dinner program.

Launched in 2008 by Birthright Israel NEXT, the holiday observance initiative paid Birthright alumni to host friends for Sabbath, Passover and High Holiday meals. The last dinner parties funded by the program will be held December 27.

“This program began more than seven years ago when the landscape of opportunity for Birthrighters and their friends to ‘do Shabbat their way’ was sparse,” Birthright Israel NEXT CEO Morlie Levin said in an email to the Forward. “This is a story of success.”

Levin did not respond to a follow-up email asking why the program was being shuttered, and Birthright NEXT did not make anyone available to speak on the record.

NEXT’s holiday meals program has been the most high-profile, and perhaps the most long-standing, in the organization’s turbulent history. The group pared back its other programs in 2011 and 2012, ending most of its direct outreach, and winding down regional offices.

Today, NEXT mostly provides support to other groups that work directly with Birthright alumni. In late November, the organization hosted a training session for 50 Jewish professionals on how to engage Birthright alumni.

The meals program, however, persisted through 2014. The program provided cash reimbursements to Birthright alumni to cover their expenses for hosting a Sabbath or holiday meal. NEXT paid $14 per guest for up to 16 guests, down from $25 per guest in the program’s early years. In return, guests were asked to pose for a picture to send back to Birthright NEXT headquarters.

Rabbi Daniel Brenner, who ran Birthright Israel NEXT when the Sabbath meals program was created, said that the original concept for the dinners was based on the ideas of the Havurah movement, a small but influential 1960s-era effort to democratize Jewish observance. Brenner, who now serves as chief of education and program at Moving Traditions, said the program promoted “the idea of home hospitality as being a central building block to Jewish community.”

Brenner said that he remained proud of the program. “I can introduce you to people that met their bashert [soul mate] because of the program,” he said. “I know that so many people were introduced to shabbes.”

Still, the program faced criticism, some from people who questioned why Birthright alumni should be paid to celebrate holidays. In a 2008 post on the website The Jew & the Carrot, a predecessor to the current Forward food blog, a writer condemned Birthright NEXT for offering additional payment to alumni for recruiting others to host the Sabbath dinners. “Since when was Shabbat a pyramid scheme?

When was multi-level marketing a way to excite people about cooking a meal with friends?” wrote the blogger, Ben Murane.

NEXT staff members and participants, however, strongly supported the initiative, according to a 2010 study of NEXT commissioned by the Jim Joseph Foundation and undertaken by SRI International. The NEXT staffers “feel that NEXT Shabbat is a highly successful way to engage young Jewish adults, teach about Jewish ritual, and build leadership among participants by asking some participants to host a NEXT Shabbat in their own homes,” the report’s authors wrote.

Birthright NEXT said that since 2008 it has helped fund 21,800 events through its Sabbath, Passover and High Holidays meals programs. All three programs will conclude at the end of 2014.

“I loved being part of the start of it, and I loved the people that were involved, and for that reason I’ll always have great memories of the energy around it,” Brenner said. “But I leave it to the hands of the people that are on the board to decide what’s best for the organization.”