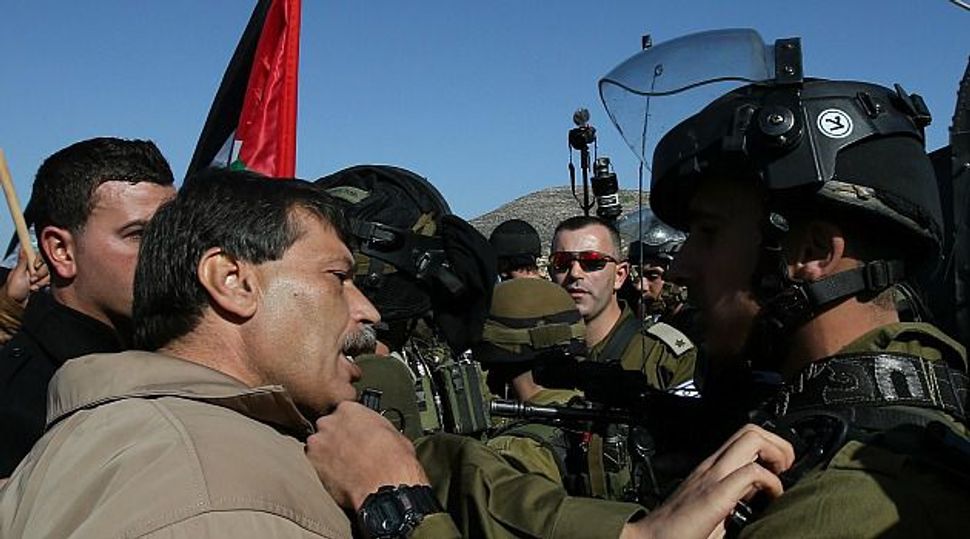 I Can’t Breathe: Ziad Abu Ein gets into scuffle with Israeli troops on West Bank. He collapsed and died later en route to a hospital. Image by getty images

Israeli and Palestinian officials issued conflicting accounts on Thursday over the results of an autopsy on a Palestinian minister who died after being shoved and grabbed by the neck by an Israeli policeman at a West Bank protest on Wednesday.

The incident comes at a time of heightened tension between Israel and the Palestinians, following months of violent unrest in Jerusalem, Tel Aviv and the Israeli-occupied West Bank.

A top Palestinian official, Hussein al-Sheik, told Reuters that Jordanian and Palestinian doctors involved in the late night examination of the body said Ziad Abu Ein, 55, had died from “being struck, inhaling tear gas and a delay in providing medical attention.”

But an Israeli medical source familiar with the autopsy results told Reuters the minister died from a heart attack and had a pre-existing heart condition.

“His death was caused by a coronary occlusion, brought on by stress. The stress may have been brought on by him being grabbed by the neck,” said the source, who spoke on condition of anonymity because he was not authorized to speak to the media.

About 30 Israeli soldiers and border policemen fired tear gas and sound grenades at about 100 people protesting against a Jewish settlement by planting olive trees in the village of Turmusiya north of Ramallah on Wednesday.

A scuffle ensued in which a border policeman pushed Abu Ein and grabbed his neck firmly with one hand. Footage of the incident and pictures taken by Reuters do not show Abu Ein responding with any violence.

Minutes later the minister began to look faint and fell to the ground, clasping his chest. He died on his way to hospital.

Palestinian president Mahmoud Abbas called the incident “barbaric” and said he and other top leaders would consider a response after a funeral for Abu Ein with full military honors at midday on Thursday.

Israel reinforced troops in the West Bank and defense minister Moshe Yaalon issued an apology over the death.