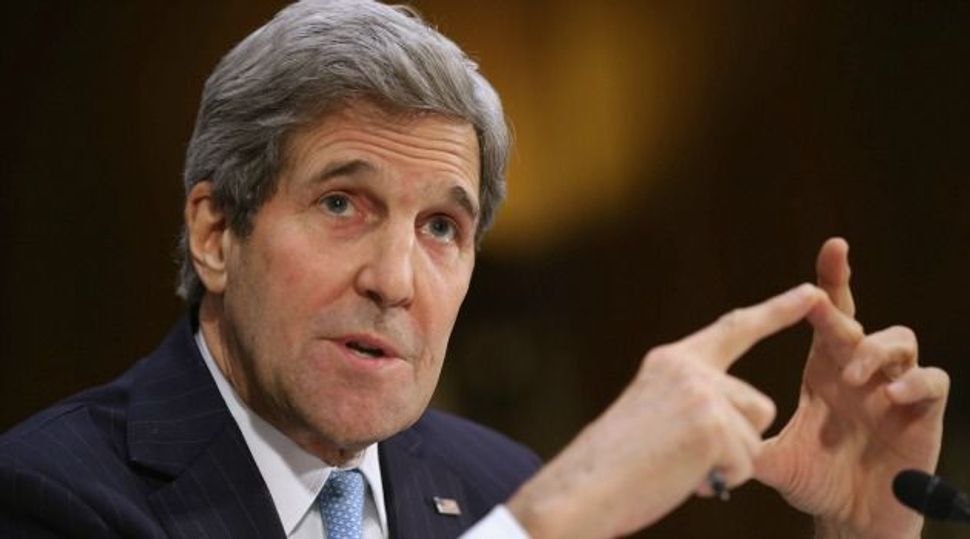 Secretary of State John Kerry said on Friday the United States was seeking to defuse tensions over proposed U.N. resolutions to end the Israeli-Palestinian conflict during talks in Europe next week.

Kerry will meet Israeli Prime Minister Benjamin Netanyahu in Rome on Monday and senior European officials to discuss possible resolutions, which would require a vote in the U.N. Security Council where the United States holds a veto.

“We’re trying to figure out a way to help defuse the tensions and reduce the potential for more conflict and we’re exploring various possibilities to that end,” Kerry told reporters in Bogota when asked whether there is a resolution the U.S. could support.

Jordan has circulated a Palestinian resolution to the 15-member council calling for Israeli occupation of Palestinian territory to end by November 2016. Western diplomats have said the proposal is “unbalanced.” France, Britain and Germany are in the process of drafting a proposal.

“There are a lot of different folks pushing in different directions out there, and the question is can we all pull in the same direction,” Kerry said, “That’s what we’re looking at.”

Some countries believe agreement on a resolution would be easier to achieve before Israel’s election in March.

If the United States pushes the Europeans to wait until after Israel’s elections, the Jordanians could put forward the Palestinian-drafted resolution for a vote in January that is likely to be vetoed by Washington.

Jordan’s U.N. Ambassador Dina Kawar said this month that she hoped a resolution could be put to a vote in December or January.

“Waiting until April and therefore probably facing a Palestinian draft in the Security Council in January, vetoed by the Americans, will just make the situation worse,” said a senior Western diplomat, speaking on condition of anonymity.

“If there is a window of opportunity for a consensus resolution it might be this month,” the diplomat said.

Kerry met French Foreign Minister Laurent Fabius on the sidelines of a climate conference in Peru on Thursday to talk about a European proposal.

He also called Russian Foreign Minister Sergei Lavrov on Friday to discuss “developments in Israel, the West Bank, Jerusalem and the region, as well as current initiatives at the U.N.,” a U.S. official said.

Later he talked to Palestinian leader Mahmoud Abbas, the State Department said in a statement.

Palestinians seek statehood in the Israeli-occupied West Bank and blockaded Gaza Strip, with East Jerusalem as their capital – lands captured by Israel in a 1967 war.

Israel accepts the idea of a “two-state solution” of an independent and democratic Palestinian state existing alongside Israel, but has not accepted the 1967 borders as the basis for final negotiations, citing security and other concerns.