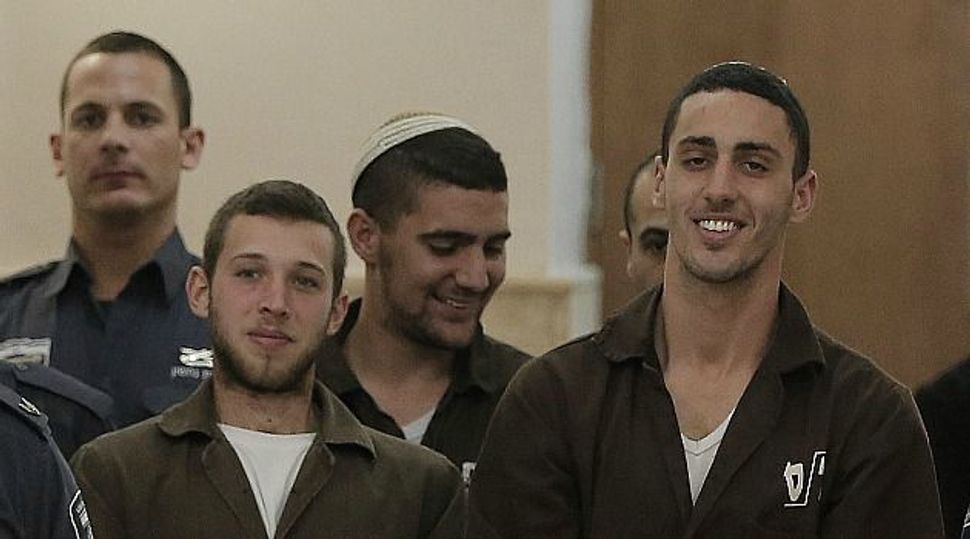 Faces of Hate: Members of Lehava, a Jewish extremist group that opposes coexistence with Arabs, grin during court appearance on charges they firebombed a Jerusalem school. Image by getty images

Israeli police arrested the head of Lehava, a group that opposes Arab-Israeli coexistence and assimilation.

The arrest comes after three members of the group were charged Monday with vandalizing and setting fire to an Arab-Jewish school in Jerusalem last month.

Lehava’s chairman, Benji Gopstein, was arrested in his hometown of Kiryat Arba, a West Bank settlement, Tuesday, according to Israeli reports. Nine other members of the group were also arrested in raids across the country, on suspicion of incitement to violence.

Lehava opposes intermarriage and joint Jewish-Arab initiatives. Members of the group staged a protest this year opposite a marriage between an Israeli Muslim man and a Jewish woman. Four Lehava members were arrested at the protest.

The lawyer for the arson suspects, Itamar Ben-Gvir, said the arrests came due to “pressure from leftist politicians,” according to reports.