Israel Dismisses U.N. Push for End to Occupation of Palestinian Lands as ‘Gimmick’ 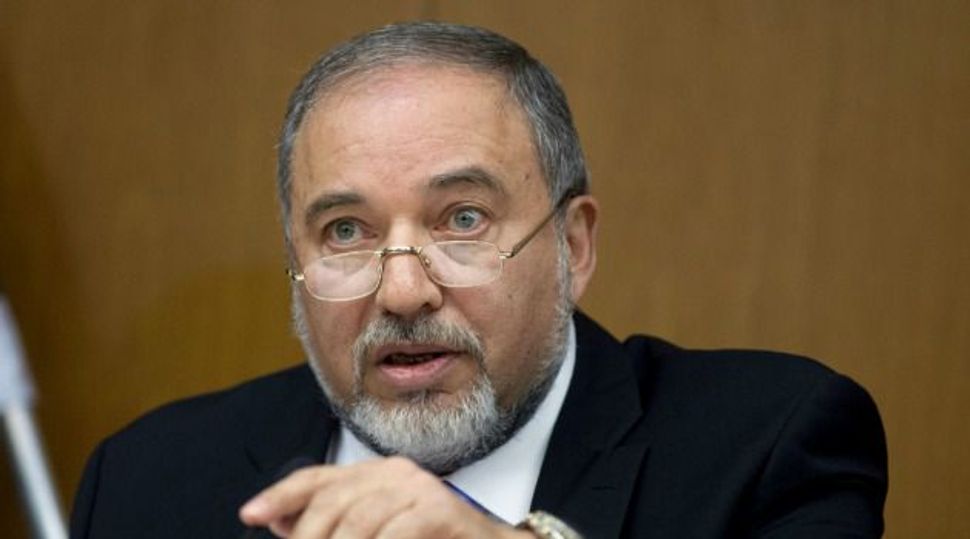 Gimmick? Avigdor Lieberman insists nothing will change regardless of U.N. measure calling for an end to Israel’s occupation. Image by getty images

Israel’s foreign minister on Thursday described as a gimmick a Palestinian-proposed U.N. Security Council draft resolution that calls for a peace deal within a year and an end to the occupation of Palestinian territories by the end of 2017.

Palestinians seek a state in the West Bank, Gaza Strip and East Jerusalem, areas Israel captured in the 1967 Middle East war. Israel pulled out of Gaza in 2005 but continues to blockade the enclave, which is controlled by its Hamas Islamist enemy.

“Certainly this (draft) will not hasten an agreement because without Israel’s consent, nothing will change,” Avigdor Lieberman said in a statement.

The draft resolution was formally submitted by Jordan to the 15-member Security Council on Wednesday, which means it could be put to a vote as soon as 24 hours later, but it does not guarantee this will happen. Some drafts have never been voted on. [ID: nL1N0U2055]

Nine votes are needed to adopt a resolution, which would then force the United States, Israel’s closest ally, to decide whether to veto it. U.S. Secretary of State John Kerry said on Tuesday the United States had made “no determinations about language, approaches, specific resolutions, any of that.”

Lieberman said the draft resolution, which follows the collapse in April of U.S.-brokered talks on Palestinian statehood, would only deepen the decades-old conflict.

“It would be better if the Security Council dealt with matters truly important to the citizens of the world, such as the murderous attacks this week in Australia and Pakistan … and not waste time on the Palestinians’ gimmicks,” he said.

Visiting Prague on Thursday, Lieberman said: “Only through negotiations is it possible to achieve a comprehensive solution.”

In Ramallah, Palestinian President Mahmoud Abbas said he would “pursue our consultations with brothers and friends” at the United Nations to canvass support for the resolution, despite Israel’s objections.

Israeli Prime Minister Benjamin Netanyahu has voiced alarm over growing international pressure on Israel to withdraw from occupied territory, saying Islamist militants would then move in.

Netanyahu reiterated these concerns on Thursday, saying Hamas could take over the West Bank as a result of the U.N. initiatives. “We won’t allow that to happen,” he added.

Israel Dismisses U.N. Push for End to Occupation of Palestinian Lands as ‘Gimmick’