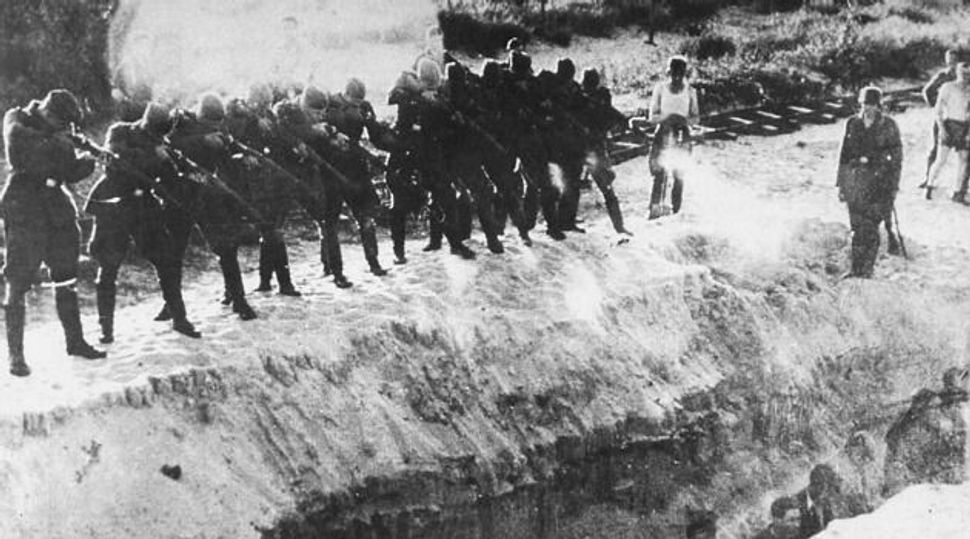 Places of Slaughter: Members of a Nazi unit firing at men standing at the bottom of a trench. Image by U.S. Holocaust Museum

An international team of researchers launched a study of Holocaust-era killing sites in the Kremenets region in western Ukraine.

The project was initiated this year by the International Holocaust Remembrance Alliance, or IHRA, whose April report on killing sites ruled out conducting archeological digs in such locales as this violates Jewish religious laws.

The study team, led by Meylakh Sheykhet, Ukraine director for the Union of Councils for Jews in the Former Soviet Union, earlier this month used geophysical imaging to delineate an area where in 1942 Nazi soldiers buried thousands of Jews they had shot. Ukraine has thousands of killing sites of various sizes.

“The actual place where they are buried is hard to locate because the designated place where we are searching was demarcated based on testimonies,” said Ksenya Bondar, a geologist from the Taras Shevchenko National University of Kiev, who participated in the survey. “We need to scan the area strip by strip.”

The survey in Kremenets is part of a larger project launched earlier this year by Sheykhet with funding from the German federal government, which he secured from Germany’s embassy in Ukraine. Ukrainian and British members of this team performed several scans earlier this year, he said.

“The scanning is necessary now because these are the last few years when we still have testimonies of people who can tell us where to look,” Sheykhet said in explaining why he pushed for the project.

He also cited construction across eastern Europe, which sometimes is performed in mass graves with or without contractors’ knowledge.

“Technology now allows us to set the historical record without disturbing the victims’ rights not to be disturbed in their final resting place. This is a combination of circumstances which must be acted upon,” Sheykhet added.