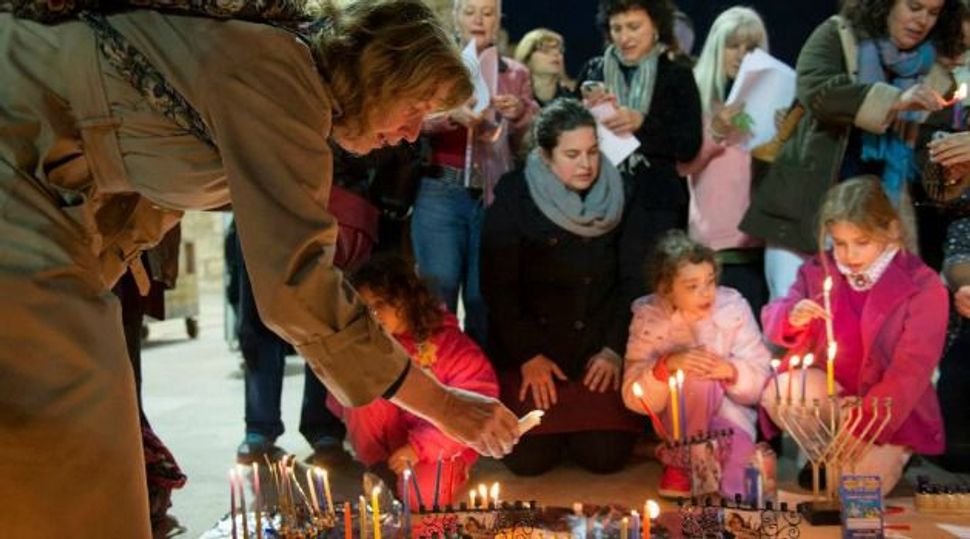 Security guards at the Western Wall entrance confiscated menorahs from several women, but dozens held a candle-lighting ceremony in the women’s section.

The guards said they were acting on orders from Rabbi Shmuel Rabinowitz, the rabbinic authority of the Western Wall and holy places, the Women of the Wall organization said Thursday night in a statement.

Women carrying some 28 Hanukkah menorahs entered the women’s section on Thursday evening and they were lit by 120 women, including Rabbi Susan Silverman and her sister, the Jewish comedian Sarah Silverman. Knesset members Tamar Zandberg and Michal Rozin of the left-wing Meretz party joined the group.

“The Kotel belongs to us all and each of us, men and women, have the right to light Chanukah candles in this public, holy place,” Anat Hoffman, chair of Women of the Wall, said in a statement following the candle lighting.

Women of the Wall, which meets at the Western Wall once a month for prayers for the new month, had requested in a letter sent last month to Prime Minister Benjamin Netanyahu to hold a Hanukkah candle-lighting ceremony in the women’s section of the holy site. They asked that a large menorah equivalent to the one lit each night of the festival in the men’s section be placed in the women’s section, allowing the women to hold their own public lighting.

Netanyahu transferred the letter to Vice Minister of Religious Affairs Eli Ben Dahan, who passed the letter on to Rabinowitz. According to the group, Rabinowitz said the menorah lit on the men’s side can be seen by all.