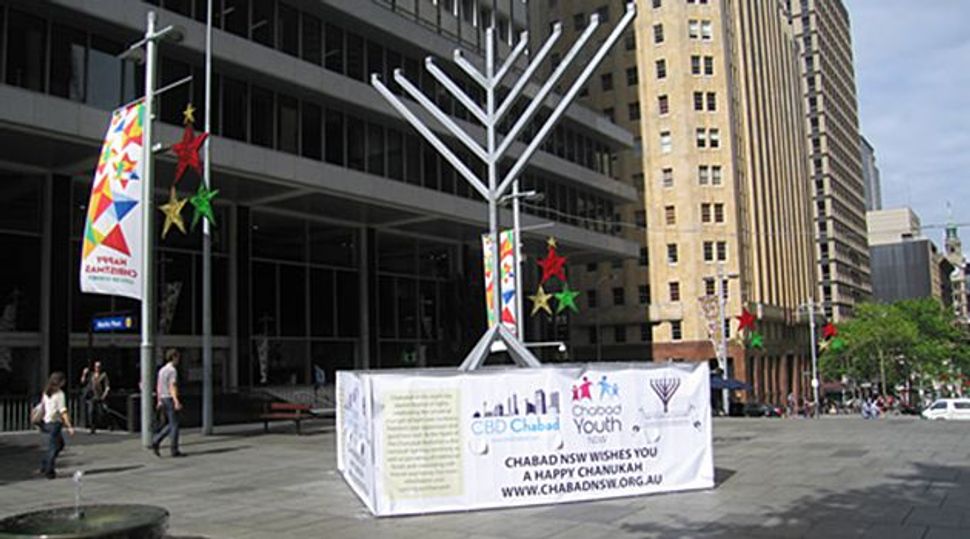 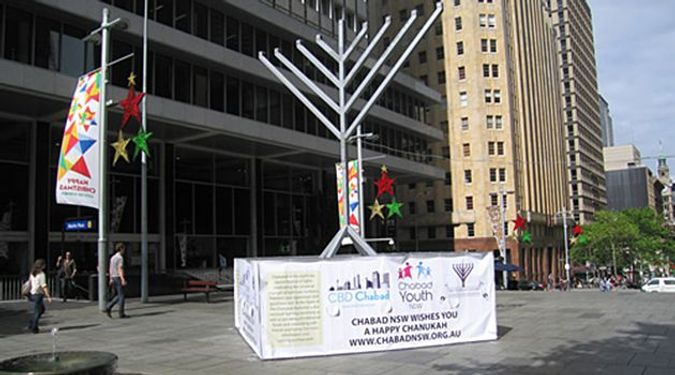 Chabad set up a menorah in downtown Sydney as a tribute to the victims of a terrorist attack.

The 32-foot menorah was erected late Thursday night in downtown Sydney, just hours after Chabad cancelled its annual candle-lighting ceremony in the wake of the terror attack that killed ended with three people, including the assailant, killed. The menorah has been used for Hanukkah lighting ceremonies for nearly 30 years.

At the foot of the menorah is a message that reads: “The Jewish community of Australia expresses our deepest sympathy for the families of the Martin Place tragedy. May the Lights of the festival of Hannukah bring comfort and warmth to our nation.”

Erecting the menorah sends a message even in the absence of the lighting ceremony, said Rabbi Elimelech Levy, the director of Chabad Youth NSW and coordinator of the annual Hannukah in the City celebration.

“Whilst the event was cancelled, the presence of the giant menorah sends a powerful message that light will always overcome darkness,” Levy said. “As we mourn the loss of life and the atrocity that has taken place, people of goodwill will continue to shine the light of freedom and communal harmony, which is what the Hannukah menorah is all about.”

The menorah was scheduled to be erected Monday night but was postponed because of the siege at Lindt chocolate café. Man Haron Monis, a self-styled Iranian cleric, held almost 20 people hostage before the 16-hour siege ended in a shootout.

On Thursday, two Chabad rabbis joined an interfaith gathering at the memorial site, which has become a sea of tens of thousands of flowers.

Rabbi Levi Wolff gave a yarzheit candle to Ken Johnson, the father of Tori, who was killed trying to subdue the terrorist. “I told him that Tori is one of G-d’s tallest candles and that he has lit up a nation with his brave act,” Rabbi Wolff told J-Wire, a local Jewish website.