How a Chocolate Pudding Could Decide Israel’s Election 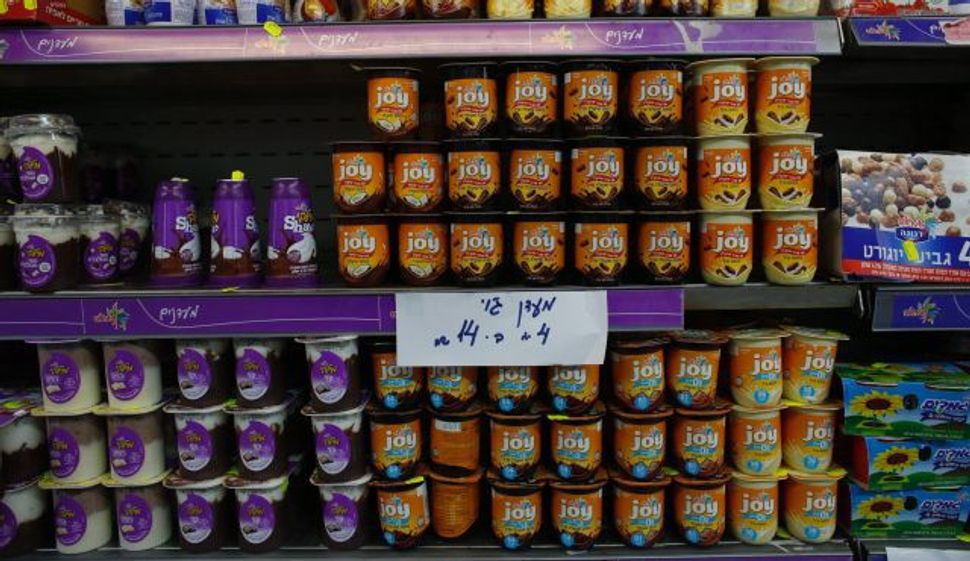 Overpriced: Milky (left), the pudding snack that has triggered a consumer protest in Israel. Image by Haaretz

(Reuters) — Israel’s high cost of living is set to dominate a March 17 election that could shake up Prime Minister Benjamin Netanyahu’s coalition, with voter anger symbolized by an overpriced dessert.

In a country where the influence of small parties makes elections notoriously hard to forecast, many experts still expect rightwing leader Netanyahu to keep power. But the focus on domestic policy and economics, rather than on security and Palestinian peacemaking, means the outcome is even more difficult to predict than usual.

Some Israelis are speaking of an election that could sweep away the familiar political order, in which left and right have jockeyed for power by appeasing interest groups while doing little to reform an economy dominated by big conglomerates.

“I now believe we have a chance to exile our failed leaders. We have a moment to change the direction Israel goes,” said Naor Narkis, a 25-year-old former intelligence officer who became an unlikely overnight national celebrity when he posted a photo on Facebook showing a chocolate pudding in Berlin selling for a third of the price of a similar “Milky” dessert in Israel.

The cost of living has been at the top of the domestic political agenda since 2011, when hundreds of thousands of Israelis took to the streets in protests sparked by the rising price of cottage cheese, a popular staple.

In the last election 18 months ago, the issue helped propel TV personality and political newcomer Yair Lapid to the post of finance minister after his centrist party placed second.

But since then, many Israelis say Lapid failed to deliver on promises of economic reform, and voters say they are now more serious about holding politicians accountable. Polls predict Lapid’s Yesh Atid party will shrink to about half its size.

Netanyahu’s own Likud party could also lose votes. It might even win fewer seats than a left-center bloc led by opposition Labor leader Isaac Herzog and centrist former peace negotiator Tzipi Livni, though Netanyahu could remain prime minister anyway if they have difficulty forming a coalition.

Polls show voters shifting to a new centrist party led by Moshe Kahlon, one of the few politicians with a reputation as a successful economic reformer. As communications minister two years ago he was behind a plan to allow new mobile phone operators into the market, which helped bring down prices.

Netanyahu held onto power in the last election despite a campaign that critics said focussed too much on his familiar theme of national security, and not enough on economic issues.

This time around, he is making the economy a central theme. On Sunday he proposed raising the minimum wage for civil servants and marketing more lower cost apartments. He has promised to lift the 18 percent value added tax on milk, cheese, eggs and bread.

Even his bedrock issue, national security, depends on “economic strength and economic growth,” he says. “It’s for the needs of our lives, the quality of our lives. To secure the future of our youth, all this requires a strong economy.”

Israel is a rich country, but its prices are higher and wages are lower than in the United States and Western Europe. Since becoming a star over the “Milky” pudding, Narkis has argued that unless Israel becomes more affordable, young Israelis “will just leave.”

After military service, he asked himself, “‘What does this country have to offer me?’ The answer was not a lot. Even if you work here in a full time job you are not able to buy an apartment,” he told Reuters.

“Israel is a country for very rich Jews and the rest can go,” he said. “The biggest threat to Israel is that young people won’t want to live here.”

Fixing the cost of living problem requires deep reforms of an economy dominated by a few powerful conglomerates that have stifled competition. Big companies are slated to be broken up, but the process will take years. The government has formed many committees to study the problem, but few changes have been made.

A government survey in June found that 4 in 10 Israelis are not able to make ends meet and 47 percent are not satisfied with their economic situation.

A basket of basic products was 12 percent more expensive in Israel than the OECD average last year, according to the Bank of Israel, while gross salaries are $10,000 lower. While Israel’s consumer price index rose 23 percent in the past 11 years, food prices jumped 39 percent.

The business sector puts much of the blame for high consumer costs on Israel’s VAT and high import taxes aimed at protecting farmers and producers.

Uriel Lynn, who heads the Federation of Israeli Chambers of Commerce, called this intervention “anachronistic.”

“Stop wasting so much time and complicating things in making more laws … and interfering so intensely in the way the business sector functions. Just expose the total industry to importation,” he said.

“If we open the market … it will be much more competitive and local producers will have to become more efficient and prices will fall,” said Lang, who chaired a government panel that examined measures to cut food costs.

Retailers say they are addressing the cost issue by bypassing big importers to carry out their own, cheaper imports, and by selling more products under their own labels that are cheaper than big brands.

How a Chocolate Pudding Could Decide Israel’s Election