Sheldon Adelson’s No. 2 Michael Leven Steps Out of Shadows 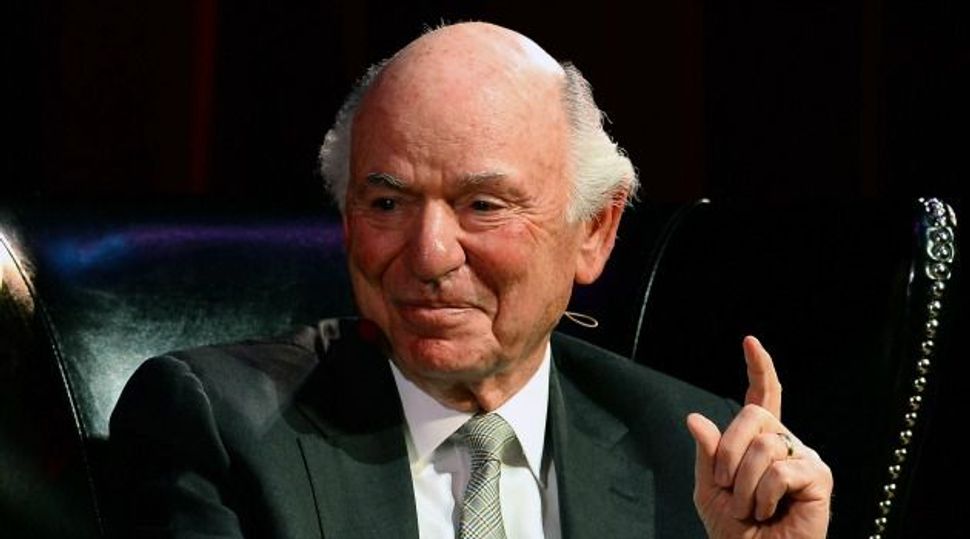 Michael Leven has been known as Sheldon Adelson’s right-hand man. Now, the philanthropist wants to step out of the mogul’s long shadow. Image by getty images

(JTA) — At a recent event to launch a pro-Israel mentoring program at UCLA, the speaker introducing Michael Leven gushed, “He was willing to take his own plane and come here to speak to us.”

When it was Leven’s turn to speak, he started with a clarification: “I didn’t take my plane, I took Sheldon Adelson’s. I wish it were my plane.”

If Leven is known to the broader public at all, it is as the No. 2 to Adelson, the casino mogul he has served for the past six years as president and chief operations officer of the Las Vegas Sands Corp. Leven helped rescue the company from near collapse and return it to profitability.

At the end of December, Leven, 76, will be retiring after 54 years in the hotel business to devote himself to philanthropic causes. In the process he will be stepping into the spotlight – in a modest way – thanks in part to Adelson.

“I’ve been involved [with Jewish causes] for many years but couldn’t back up my involvement with the checks that I write,” Leven told JTA. “But now, because of my association with Sheldon and Las Vegas Sands, I’ve gotten a lot of publicity.”

He also now has vastly more financial clout to back up those checks.

According to Reuters, Leven has exercised stock options from Las Vegas Sands worth more than $50 million as of 2013, in addition to a reported $6.95 million in total compensation in 2013. That’s after the company’s stock had soared to $55 a share this week, thanks in part to his efforts – Leven says it had traded at $1.55 a share when he joined Las Vegas Sands in early 2009.

Leven is a key funder of the Foundation for Jewish Camp’s new BunkConnect program, which helps defray the costs of Jewish camp. He also is assuming the role of chairman of the planning committee for Birthright Israel, taking over from mega-philanthropist Charles Bronfman.

For Leven, his Jewish and business experience has long gone hand in hand. His passion for Jewish camp stems from his years as a camper and counselor at Camp Tevya in New Hampshire. Leven says the experience intensified his love of Judaism while preparing him for a career in business.

Leven also believes that it was Jewish values that brought him to his position at Las Vegas Sands, where he has served on the board since 2004. In December 2008, he visited Israel for the bar mitzvah of a friend’s grandson and spent time with Adelson and his wife, Miriam.

“Sheldon and Miriam didn’t know that I was so pro-Israel,” said Leven, noting proudly that as president of Holiday Inn Worldwide, he opened the chain’s first hotels in Israel. He believes that the Adelsons, and particularly Miriam, “saw that I had certain Jewish values” and offered him the job as Sands president.

In an interview with JTA, Sheldon Adelson denied that “personal feelings” had anything to do with Leven’s hiring. It was, he said, purely a business decision. However, Adelson acknowledged, “We share a lot of the same values.”

It was those shared values, in part, that led Adelson to ask Leven to serve on the board of Birthright, of which Adelson is a primary funder.

“He’s both effective and independent,” Adelson said. “He’s a very good communicator. He can get in the middle of a conflict and he can do a lot to straighten it out.”

The admiration is mutual.

“Living with Sheldon and living with Miriam over these last six years, I’ve really found out what real Zionism is,” said Leven, who last month was awarded the Louis D. Brandeis Award by the Zionist Organization of America.

Describing himself as a “liberal Republican,” Leven leans left on social issues, has largely supported Republicans with his campaign donations in recent years, and this year was a featured speaker at both the Nevada Republican Convention and the Republican Jewish Coalition’s annual meeting held at the Sands Corp.’s Venetian Hotel and Casino.

On Israel, Leven describes himself as “center-right” – a supporter of a two-state solution, but only once Israel’s security is guaranteed. Although his voice and demeanor are typically gentle and grandfatherly, he can be a pugnacious defender of the Jewish state.

“I believe we are in a war now, a real war,” Leven said. “We have to survive because of the contributions that Jews make to the world.”

Leven’s Jewish concerns extend well beyond Israel. He is a supporter of outreach to interfaith couples and is helping to fund the construction of a non-Orthodox mikvah in Atlanta.

Above all, Leven says he enjoys philanthropic ventures, like BunkConnect, that challenge him creatively. Drawing on his half-century of experience in the hospitality industry, he explains that the idea is to offer slots at camps during less popular weeks for a discount, and then to tie tuition costs to family income.

“It’s actually a business approach,” Leven said. “The model is essentially how to use unused inventory.”

BunkConnect has already had a test run in pilot programs, and Leven expects to tweak it as new data come in.

In the meantime, he is leaving Las Vegas and expects to split his time between Boca Raton, Fla., and Atlanta, where he is taking a part-time role as the chairman and CEO of the Georgia Aquarium founded by his friend Bernie Marcus, a co-founder of Home Depot.

To Leven, the dedication to charitable work in what many others would consider to be their leisure years is not so much a matter of largesse as a paying forward of old debts.

“I have a belief that the only debt people should have when they get older is the debt they have to those institutions that provided them the values that make them successful,” Leven told JTA. “I had no money. I had an education and I had the institutions that helped me.”

Sheldon Adelson’s No. 2 Michael Leven Steps Out of Shadows