Interfaith Fellowship Gets Into Aliyah Game With Ukraine AIrlift 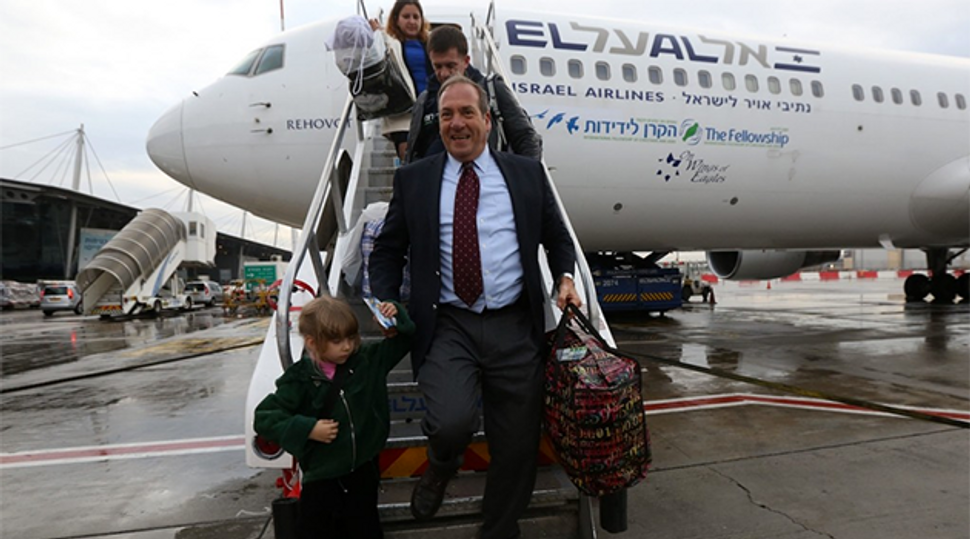 (JTA) — Citing failures by the organization traditionally responsible for bringing Jews to Israel, the founder of a Jerusalem-based interfaith charity said his organization would begin bringing more Jews to Israel from Europe — starting with Ukraine.

Rabbi Yechiel Eckstein, the founder of the International Fellowship of Christian Jews, accused the Jewish Agency for Israel of not responding quickly enough to demand for aliyah sparked by violence in Ukraine, prompting the fellowship to launch its own aliyah operation in the country.

“More and more Ukrainian Jews are open to moving to Israel and going on aliyah,” Eckstein said. “But there were too many blockages in the system, too much bureaucracy in the system to enable them to go quickly enough.”

Eckstein has sparred in the past with Jewish Agency officials over what he said was a lack of recognition of his organization’s contributions. The fellowship has given the Jewish Agency $170 million since 1994 — donations that Eckstein has repeatedly threatened to suspend over what he said was an attempt to obscure the Christian source of the funds.

The Jewish Agency denies the claim.

The agency’s spokesman, Yigal Palmor, said his organization cherished the contribution of the fellowship, but said it must go through the Jewish Agency to become involved in aliyah.

“We will gladly share the Jewish Agency’s infrastructure with any group or individual who wishes to cooperate rather than compete with our efforts,” Palmor said.

Earlier this month, Israel implemented special procedures to speed up the immigration process for people with Jewish origins from Ukraine’s conflict zones.

Eckstein said the fellowship decided to become involved in aliyah because of delays in getting Jews out of embattled areas of Ukraine, adding that he may begin to help organize emigration from Russia, Muslim countries and elsewhere.

“The Jewish Agency has only one representative to Ukraine,” Eckstein told JTA. “The Israeli Embassy was closed for business during critical times. That’s not the way I work. I put together a team and we started working.”

Palmor said the Jewish Agency’s efforts resulted in the aliyah of over 5,100 Jews from Ukraine in the first 11 months of 2014, more than double the figure for the whole of 2013. He declined to comment further on Eckstein’s criticism.

“We are interested in overcoming the unnecessary tensions that may have arisen while this flight was being put together, and in cooperating for the greater cause of encouraging aliyah,” Palmor said. “The Jewish Agency is working intensively in Ukraine and elsewhere and is thankful of the contribution of its partners, including the fellowship led by Rabbi Eckstein.”

Perhaps mindful of the millions Eckstein contributes, Jewish Agency officials would not criticize him on the record, though one did note that emigres received a $1,000 grant from the fellowship on the condition that they flew with the group flight on Monday.

“They are ready to accept the money but not to say thank you, and we won’t tolerate it anymore,” Eckstein said. “We’ve been trying to get the Jewish Agency to acknowledge our donors publicly, but it hasn’t happened so we took our own route.”

Interfaith Fellowship Gets Into Aliyah Game With Ukraine AIrlift