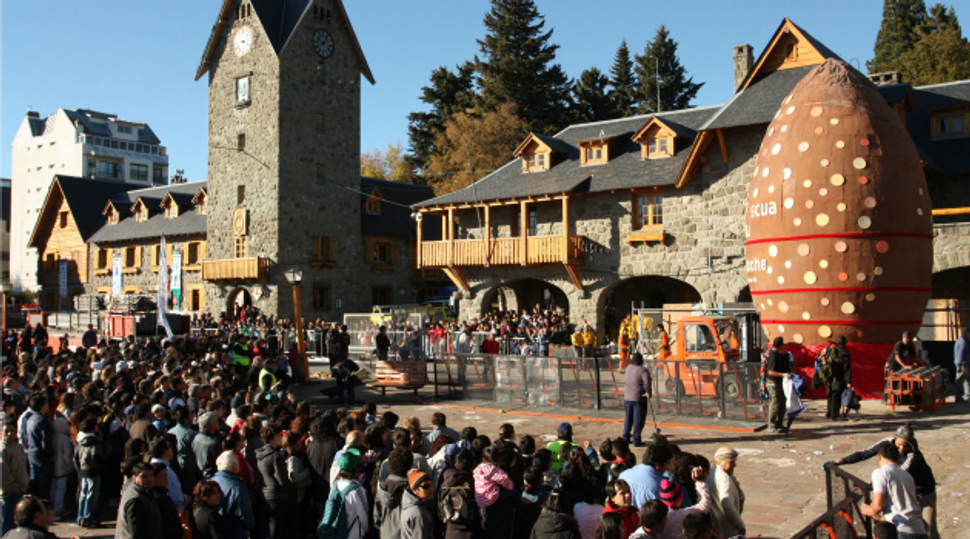 Crowds gathered in 2012 in the Argentina town of Bariloche to view the world’s biggest Easter egg. Some in the Andes foothills town are campaigning against Israeli tourists. Image by getty images

A campaign against Israeli backpackers has been launched in the Patagonian region of Argentina, where Israelis make up about 10 percent of the lucrative tourist trade.

Posters appeared Monday in the city of Bariloche, a major tourism center located in the foothills of the Andes Mountains in which most of the stores have signs in Hebrew to attract Israeli visitors, calling for a boycott against Israeli tourists.

“Boycott Against Israeli Military Tourism” was written on the posters, signed by the Palestine Solidarity Committee in Argentine Patagonia.

The epithet “Jews Out of Patagonia” also appeared on two pesos bills, the lowest denomination of Argentinian bills. Following on a protest by the local Jewish community, the National Institute Against Discrimination, or INADI, opened an investigation, and its regional delegate, Julio Accavallo, demanded sanctions against the boycotters and called for the posters to be removed.

“We applaud INADI delegate Accavallo, who is challenging this boycott initiative as a violation of Argentine law. Our center has expressed its solidarity with the Bariloche Jewish community and offered its support and cooperation against the BDS hatemongers,” Sergio Widder, the Simon Wiesenthal Center’s director for Latin America, told JTA. BDS stands for the Boycott, Divestment and Sanctions movement against Israel.

Bariloche also was a refugee city for Nazis after World War II. Former Nazi war criminal Erich Priebke served as the director of the German School of Bariloche for many years.

“The Wiesenthal Center has exposed the BDS movement as being based on the 1930’s racist Nazi “Kaufen nicht bei Juden,” or Do not buy from Jews, campaign. Adolf Eichmann would laugh to know that in the country whose hospitality he abused, his legacy now discriminates against Israeli teenage backpackers”, said Dr. Shimon Samuels, director of International Relations for the Wiesenthal Center.