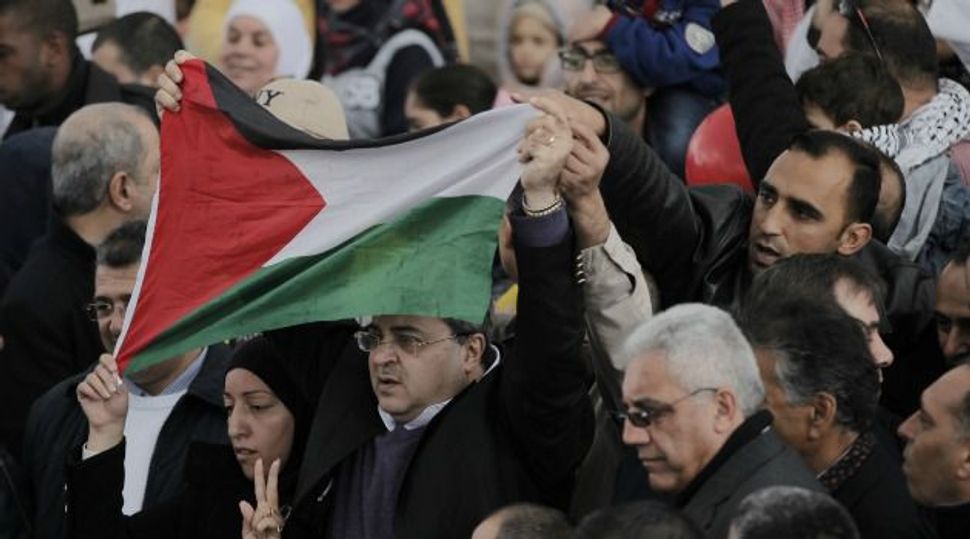 Birthday Party: Ahmed Tibi, Israeli-Arab member of the Knesset, waves a Palestinian flag during a ceremony commemorating the birth of Prophet Mohammed. Image by Getty Images

Tibi on Saturday led a procession of hundreds of eastern Jerusalem Palestinians to the site in honor of the birthday of the prophet Muhammad.

The United Arab List-Taal party lawmaker called for “an end to the occupation” and said that “the procession sends a message of liberty and peace and a desire to shake free the burden of the occupation in order to gain a normal and free life.”

He called the Al-Aksa Mosque, where the procession ended, “the crown jewel of Jerusalem, which will be the capital of Palestine,” Ynet reported.

Marchers chanted Tibi’s name, as well as “Tibi, you are the hero of Palestine” and “You are the strongest man who can protect our rights” in Arabic.

Tibi, a medical doctor, could lead a united Arab party in the upcoming national elections in Israel, according to Ynet.

The Temple Mount is holy to Muslims and Jews.