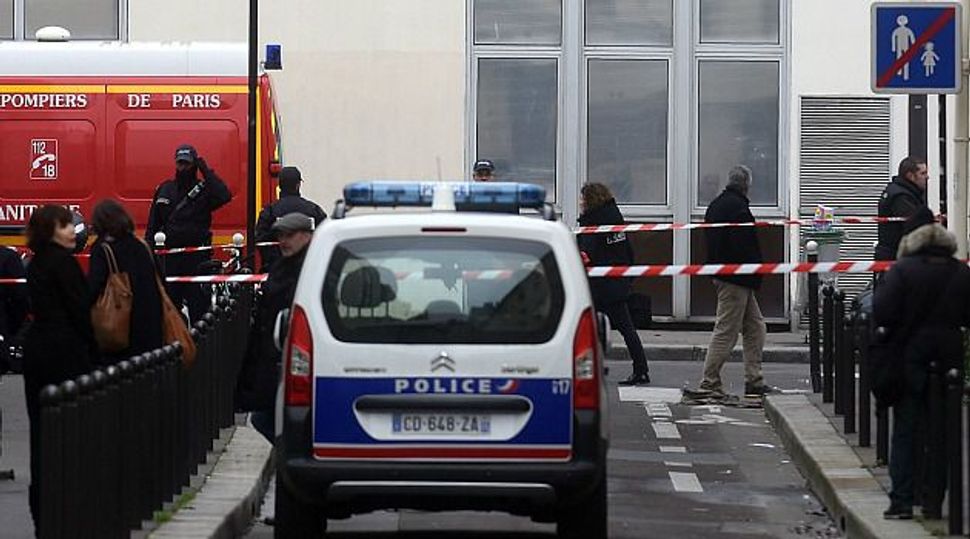 (Reuters) — The youngest of three French nationals being sought by police for a suspected Islamist militant attack that killed 12 people at a satirical magazine on Wednesday turned himself into police, an official at the Paris prosecutor’s office said.

The hooded attackers stormed the Paris offices of Charlie Hebdo, a weekly known for lampooning Islam and other religions, in the most deadly militant attack on French soil in decades.

French police were still in a huge manhunt for two of the attackers who escaped by car after shooting dead some of France’s top cartoonists as well as two police officers.

Police issued a document to forces across the region saying the men were being sought for murder in relation to the Charlie Hebdo attack.

The police source said one of them had been identified by his identity card, which had been left in the getaway car.

An official at the Paris prosecutor’s office said the youngest of the three had turned himself in at a police station in Charleville-Mézières, some 230 kilometers northeast of Paris near the Belgium border.

BFM TV, citing unidentified sources, said the man had decided to go to the police after seeing his name in social media. It said other arrests had taken place in circles linked to the two brothers.

The police source said Cherif Kouachi had previously been tried on terrorism charges and served 18 months in prison.

He was charged with criminal association related to a terrorist enterprise in 2005. He had been part of an Islamist cell that enlisted French nationals from a mosque in eastern Paris to go to Iraq to fight Americans in Iraq. He was arrested before leaving for Iraq to join militants.

Police published pictures of the two brothers Thursday morning calling for witnesses and describing the two men as “armed and dangerous.”

The police source said anti-terrorism police searching for the suspects and links to them had carried out searches in Reims, Strasbourg and Paris as part of the investigation.

A Reuters reporter in Reims saw anti-terrorism police secure a building before a forensics team entered an apartment there while dozens of residents looked on.

During the attack, one of the assailants was captured on video outside the building shouting “Allahu Akbar!” (God is Greatest) as shots rang out. Another walked over to a police officer lying wounded on the street and shot him point-blank with an assault rifle before the two calmly climbed into a black car and drove off.

A police union official said there were fears of further attacks, and described the scene in the offices as carnage, with a further four wounded fighting for their lives.

Tens of thousands joined impromptu rallies across France in memory of the victims and to support freedom of expression.

The government declared the highest state of alert, tightening security at transport hubs, religious sites, media offices and department stores as the search for the assailants got under way.

Some Parisians expressed fears about the effect of the attack on community relations in France, which has Europe’s biggest Muslim population.

“This is bad for everyone – particularly for Muslims despite the fact that Islam is a fine religion. It risks making a bad situation worse,” Cecile Electon, an arts worker who described herself as an atheist, told Reuters at a vigil on Paris’s Place de la Republique attended by 35,000 people.

Charlie Hebdo (Charlie Weekly) is well known for courting controversy with satirical attacks on political and religious leaders of all faiths and has published numerous cartoons ridiculing the Prophet Mohammad. Jihadists online repeatedly warned that the magazine would pay for its ridicule.

The last tweet on its account mocked Abu Bakr al-Baghdadi, the leader of the militant Islamic State, which has taken control of large swathes of Iraq and Syria and called for “lone wolf” attacks on French soil.

There was no claim of responsibility. However, a witness quoted by 20 Minutes daily newspaper said one of the assailants cried out before getting into his car: “Tell the media that it is al Qaeda in Yemen!”

Supporters of Islamic State and other jihadist groups hailed the attack on Internet sites. Governments throughout Europe have expressed fear that fighters returning from Iraq or Syria could launch attacks in their home countries.

“Today the French Republic as a whole was the target,” President Francois Hollande said in a prime-time evening television address. He declared a national day of mourning on Thursday.

An amateur video broadcast by French television stations shows two hooded men in black outside the building. One of them spots a wounded policeman lying on the ground, hurries over to him and shoots him dead at point-blank range with a rifle.

In another clip on television station iTELE, the men are heard shouting in French: “We have killed Charlie Hebdo. We have avenged the Prophet Mohammad.”

Paris prosecutor Francois Molins said the assailants killed a man at the entrance of the building to force entry. They then headed to the second floor and opened fire on an editorial meeting attended by eight journalists, a policeman tasked with protecting the magazine’s editorial director and a guest.

“What we saw was a massacre. Many of the victims had been executed, most of them with wounds to the head and chest,” Patrick Hertgen, an emergencies services medic called out to treat the injured, told Reuters.

A Reuters reporter saw groups of armed policeman patrolling around department stores in the shopping district and there was an armed gendarme presence outside the Arc de Triomphe.

U.S. President Barack Obama described the attack as cowardly and evil, while German Chancellor Angela Merkel was among European leaders condemning the shooting.

Dalil Boubakeur, head of the French Council of the Muslim faith (CFCM), condemned an “immensely barbaric act also against democracy and freedom of the press” and said its perpetrators could not claim to be true Muslims.

Rico, a friend of Cabut, who joined the Paris vigil, said his friend had paid for people misunderstanding his humor.

“These attacks are only going to get worse. It’s like a tsunami, it won’t stop and what’s happening today will probably feed the National Front,” he told Reuters without giving his family name.

The far-right National Front has won support on discontent over immigration to France. Some fear Wednesday’s attack could be used to feed anti-Islamic agitation.

National Front leader Marine Le Pen said it was too early to draw political conclusions but added: “The increased terror threat linked to Islamic fundamentalism is a simple fact.”

France last year reinforced its anti-terrorism laws and was on alert after calls from Islamist militants to attack its citizens and interests in reprisal for French military strikes on Islamist strongholds in the Middle East and Africa.

The last major attack in Paris was in the mid-1990s when the Algerian Armed Islamic Group (GIA) carried out a spate of attacks, including the bombing of a commuter train in 1995 which killed eight people and injured 150.