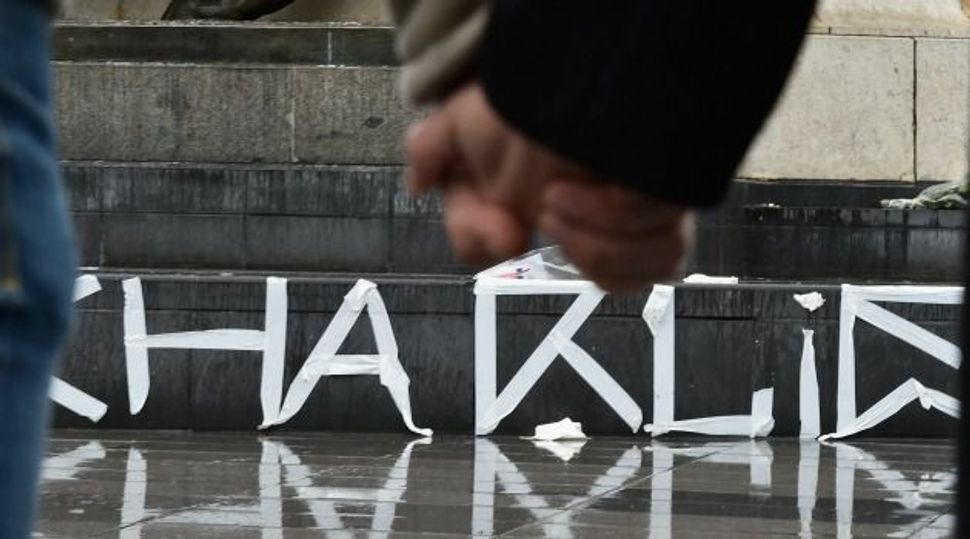 Outpouring: French Jews ramped up security as ordinary people demonstrated against the Islamist terrorists who killed 12 people at a Paris satire magazine. Image by getty images

Jewish institutions in the Paris region have upped their level of security to the maximum following the slaying of 12 people at the offices of a French satirical weekly.

The increase in security occurred hours after Wednesday’s slaying of 12 people at the offices of the Charlie Hebdo weekly and it comprises an addition of uniformed and non-uniformed police officers outside Jewish institutions and in areas with large Jewish populations, according to Chlomik Zenouda of the National Bureau for Vigilance against anti-Semitism, or BNVCA.

In addition to the increase in police protection, volunteers from the Jewish community have been called upon to provide security inside the perimeters of synagogues and Jewish schools, Zenouda told JTA Thursday.

“We are past red alert at this stage, it’s all hands on deck because, sadly, the question is not whether the French Jewish community will be targeted, but when,” he said. “There are indications that this may happen in the near future.”

The attack on Charlie Hebdo, which published many satirical cartoons about Islam, was believed to have been carried out by jihadists. In 2012, an Islamist who trained in Pakistan killed four Jews at a Jewish school in Toulouse. Another French Muslim is standing trial in Brussels for the slaying of four last year at the Jewish Museum of Belgium.

Those attacks prompted a major increase in security of Jewish communities across Western Europe, where Israel’s summer conflict with Hamas in Gaza triggered an uptick in anti-Semitic violence.

Zenouda said BNVCA are looking into the attack in Montrouge south of Paris on Thursday, in which an unidentified man killed a police officer with what witnesses said was an automatic rifle.

“One of the options being investigated is that the assailant was on his way to a nearby Jewish school when police intercepted him,” Zenouda said.