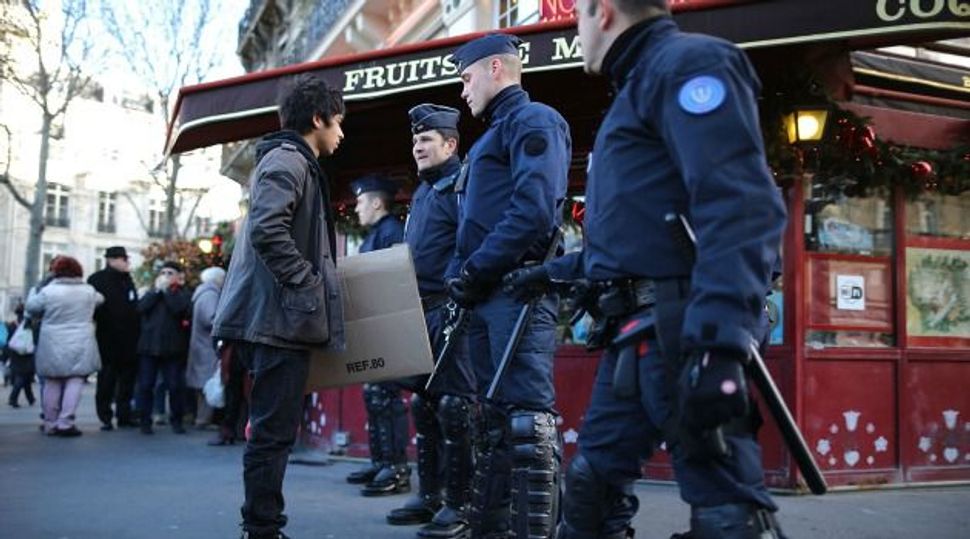 Nearly 5,000 security forces and police will be deployed to protect the country’s 700 Jewish schools, Interior Minister Bernard Cazeneuves said Monday during a meeting with parents at a Jewish school south of Paris near the site of last week’s deadly attack on a kosher supermarket, the French news agency AFP reported.

The promise of more protection came a day after French President François Hollande said in a meeting with French Jewish leaders in the wake of the attack on the Hyper Cacher kosher supermarket that the country would move to protect synagogues and Jewish schools, including using the military.

Also Monday, Prime Minister Manuel Valls said that Paris kosher supermarket gunman Amedy Coulibaly likely had an accomplice and asserted that “the hunt will go on.”

France will have more than 10,000 soldiers mobilized on home soil by Tuesday after 17 were killed in attacks carried out by Islamist militants in Paris last week, Defense Minister Jean-Yves Le Drian said on Monday.

Speaking a day after the biggest French public demonstration ever registered, held to remember the victims, he said France was still at risk of further attacks.

“The threats remain and we have to protect ourselves from them. It is an internal operation that will mobilize almost as many men as we have in our overseas operations,” Le Drian told reporters after a cabinet meeting.

The victims, including journalists and police, lost their lives in three days of violence that began on Wednesday with a shooting attack on the political weekly Charlie Hebdo, known for its satirical attacks on Islam and other religions.

The Charlie Hebdo attackers, two French-born brothers of Algerian origin, singled out the weekly for its publication of cartoons depicting and ridiculing the Prophet Mohammad.

The bloodshed ended on Friday with a hostage-taking at a Jewish deli in which four hostages and another gunman were killed.

Interior Minister Bernard Cazeneuve said that 4,700 police officers would be deployed at all 717 Jewish schools across the country.

The first two attackers were also killed on Friday after a siege north of the capital. Police said all three men were part of the same Paris-based militant Islamist cell.

Over 1.2 million people marched in Paris on Sunday and 2.5 million more in the provinces. The Paris march was led by dozens of heads of state. Some commentators said the last time crowds of this size were seen in the capital was at the Liberation of Paris from Nazi Germany in 1944.

The co-ordinated assaults amounted to the deadliest attack by militant Islamists on a European city since 57 people were killed in an attack on London’s transport system in 2005.

German Chancellor Angela Merkel, British Prime Minister David Cameron, who was holding an emergency security meeting of his cabinet on Monday in light of the French attacks, and Italian Prime Minister Matteo Renzi were among 44 foreign leaders marching with French President Francois Hollande on Sunday.

U.S. Secretary of State John Kerry said he would travel to Paris this week to express solidarity with the victims of the Islamic militant attack on a satirical weekly newspaper.

He called for the creation of a European database of airplane passenger names and said Europe should fight against abusive use of the Internet to spread hate speech.