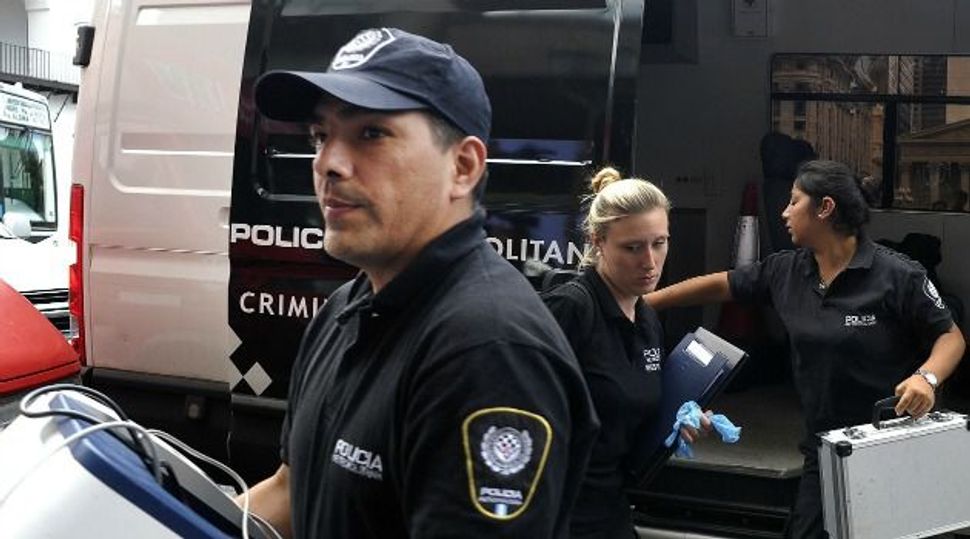 Argentine police carry evidence from the apartment of Alberto Nisman, the prosecutor who died in what officials called a suicide in his Buenos Aires apartment. Image by getty images

(Reuters) — A prosecutor who accused Argentina’s president of trying to derail the investigation into a 1994 bombing, and who died in mysterious circumstances on Sunday, was misled to believe there was a conspiracy to whitewash the crime, the government said on Wednesday.

State prosecutor Alberto Nisman, the lead investigator into the 1994 car bomb attack that killed 85 people at a Jewish community center in Buenos Aires, was found dead in his apartment late on Sunday, hours before he was scheduled to present his case to Congress.

A 22-caliber pistol was found at his side and Nisman appears to have committed suicide, but many of the details of the case are unclear and allegations of foul play have surged. He died just a few days after accusing President Cristina Fernandez of trying to hamper his probe.

A top government official said on Wednesday that Nisman was tricked into believing that two men who formed the backbone of his case against President Cristina Fernandez were government spies.

“They sold him on a connection that did not exist,” said Anibal Fernandez, the president’s chief of staff.

Asked by a reporter if Nisman had been “totally naive,” Fernandez replied: “You said it better than me.”

Antonio Stiusso, a senior Argentine spy, was fired in a December shake-up of the intelligence service, where one of his duties had been to help Nisman with the investigation into the 1994 bombing.

Chief of Staff Fernandez said it was Stiusso who falsely told Nisman that the two men who helped him build a case against the president were state intelligence agents.

The government has suggested Nisman’s death may have been linked to a struggle within the state intelligence services but it has not provided details and no one has yet been detained.

Nisman said last week that Fernandez wanted to whitewash the bombing and normalize relations with Iran in order to trade Argentine grains for Iranian oil. Argentina has a $7 billion annual energy gap, complicating the government’s efforts to jumpstart a faltering economy.

“Fernandez was determined to use intelligence personnel to carry out the conspiracy,” Nisman said in his complaint.

Fernandez and her ministers dismissed Nisman’s charges as ridiculous.

A source who worked for years on the investigation with Nisman told Reuters that the lead prosecutor was sure of himself last week as he prepared to take his case of Congress.

“He was very determined … No one (on the investigative team) believes he committed suicide,” the source said, echoing the opinion of Nisman’s ex wife and others who knew him.

Investigators have said Nisman was alone when he died, and that the two doors to the apartment were locked from the inside but local media reported on Wednesday that an air conditioning duct leading to the apartment was being looked at as a third possible way into Nisman’s home.