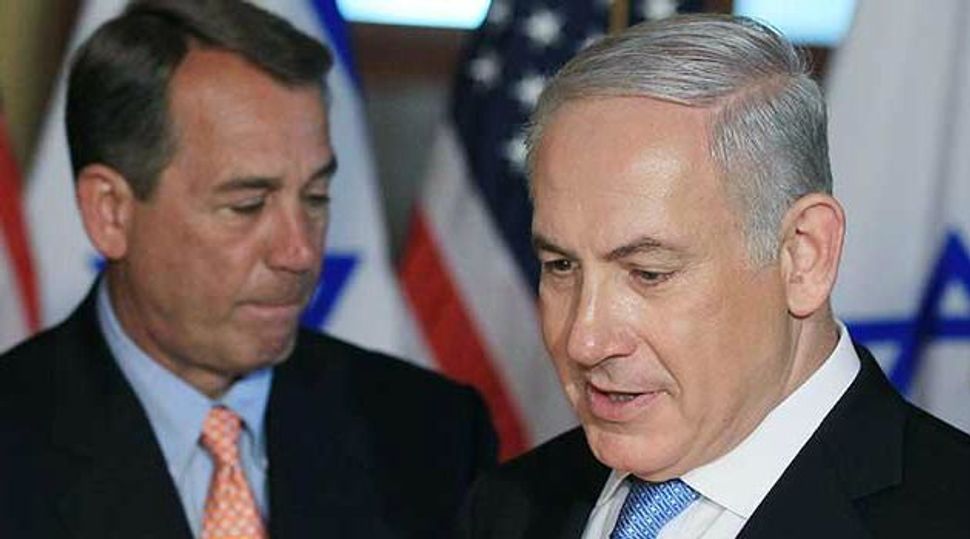 (JTA) — The invitation from Rep. John Boehner (R-Ohio,) the speaker of the U.S. House of Representatives, to Israeli Prime Minister Benjamin Netanyahu to address Congress appears to have been very personal, indeed – virtually no one outside the Boehner-Netanayhu circle had any idea it was coming until just before the announcement.

The Anti-Defamation League’s Abe Foxman thinks it might also be ill-advised. “This looks like a political challenge to the White House and/or a campaign effort in Israel,” he told JTA.

Israeli elections are in March, and Boehner’s announcement came the day after President Obama said he would veto any new Iran sanctions legislation, something Republicans – backed by the American Israel Public Affairs Committee – hope to overcome with enough Democratic votes to override a veto.

“I certainly support the sanctions if the deal doesn’t come through but having said that, the invitation and acceptance is ill-advised for either side,” Foxman said. “It is too important an issue to politicize it.”

So let’s review: This morning, just before 10 a.m., Boehner announced that he had asked Netanyahu to speak to both houses of Congress on Feb. 11.

“In this time of challenge, I am asking the Prime Minister to address Congress on the grave threats radical Islam and Iran pose to our security and way of life,” Boehner said in a statement. “Americans and Israelis have always stood together in shared cause and common ideals, and now we must rise to the moment again.”

The White House says it got no notice of the invitation; nor did the State Department.

“The typical protocol would suggest that the leader of a country would contact the leader of another country when he’s traveling there,” White House spokesman Josh Earnest told reporters traveling with President Obama aboard Air Force One to Boise Idaho, according to pool notes distributed to reporters. “That certainly is how President Obama’s trips are planned when he travels overseas. This particular event seems to be a departure from that protocol.”

That said, Earnest denied that the White House was annoyed, although he also made it clear the Obama administration would like a preview of the speech.

Boehner, in the morning press conference with other GOP leaders, admitted he did not inform the White House, and suggested it was none of the administration’s beeswax anyway.

“I did not consult with the White House; the Congress can make this decision on its own,” he said. “There needs to be more serious conversation in America about how serious the threat is from radical Islamic jihadists and the threat posed by Iran.”

Here’s the thing about that “Congress can decide” business: Boehner issued the invitation “on behalf of the bipartisan leadership of the U.S. House of Representatives and the U.S. Senate.” Netanyahu’s office, which is telling media it has accepted the invitation, is emphasizing “bipartisan.”

But according to the office of Rep. Nancy Pelosi (D-Calif.), the minority leader: Pelosi was not consulted, a senior staffer in her office told JTA. We asked Boehner’s office to explain the discrepancy and have yet to hear a reply.

“Traditionally we would learn about the plans of a leader to come to the United States separately from learning about it from the speaker of the House, which is how we learned about PM Netanyahu’s plans to speak to a joint session,” she said.

She made clear she did not expect Netanyahu’s speech would be a paean to Obama’s policies. “Its no secret that we have a different point of view as it relates to the benefit of ongoing negotiations with Iran and our effort to prevent Iran from acquiring a nuclear weapon, and Prime Minister Netanyahu has spoken to that extensively.” Still, Psaki said the Obama administration did not have “general objections” to Netanyahu addressing Congress.

Last word to Foxman, who suggests that Boehner uninvite and Netanyahu unaccept.

“I see the White House giving both parties a ladder to climb down by saying this is a protocol breach,” he said. “I hope they accept it.”