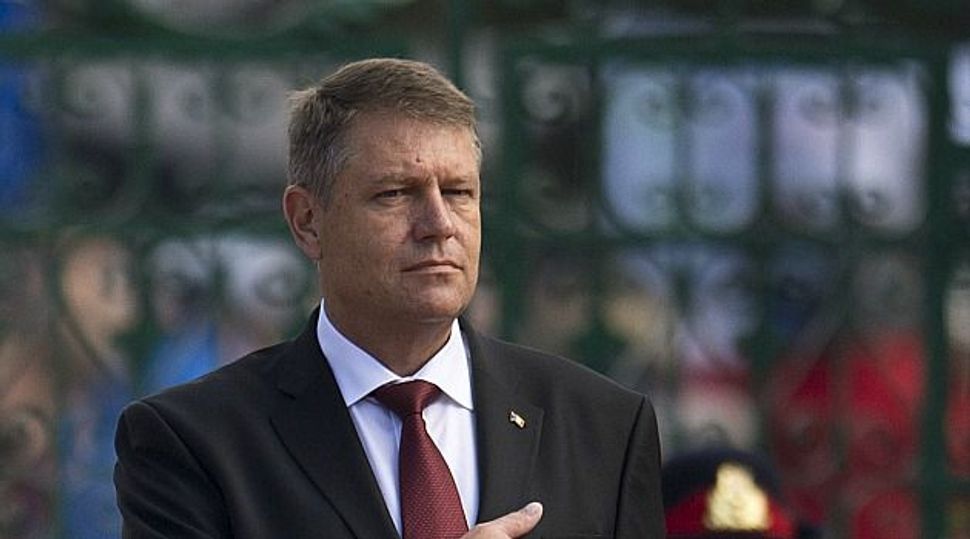 A Romanian anti-Semitism watchdog condemned Romanian President Klaus Iohannis’ honoring of a man who praised fascists who murdered Jews during the Holocaust.

The Center for Monitoring and Combating Antisemitism, or MCA Romania, was responding to the admission last month of the anti-Communist political activist Octav Bjoza into the Order of the Star of Romania for his efforts within the Association of Former Political Prisoners in Romania.

Bjoza, 76, was the first of 25 people Iohannis Dec. 22 decorated with the Star of Romania medal. The ceremony was the newly elected president’s first official function after assuming office the previous day.

“It is deeply regrettable that in post-communist Romania, Mr. Bjoza chose to celebrate the ideas and beliefs of a criminal group like the Legionnaires,” MCA Romania Director Maximillian Marco Katz told JTA Thursday, referring to Romania’s pro-Nazi Iron Guard.

Iohannis’ embrace of Bjoza was “a disappointing note of populism,” he added. “It sends the wrong message.”

Iron Guard members killed 125 Jews during the Bucharest pogrom of 1941 and many thousands more throughout World War II.

In 2009, Bjoza was filmed attending an event titled “Commemorating Legionnaires, Assassinated Martyrs,” where he said: “I am not a Legionnaire, it was too late to become one, but fortunately, at the age of 19 I was educated by some of them.”

He said they taught him that “the Romanian nation is hunted by traitors.” For this, he added, “I will forever carry them in my mind and in my soul.”

Following criticism over the award he received, Bjoza told the Adevarul daily that he was “not anti-Semitic” and that he “rejects extremism of any sort.”

Iohannis told Romanian media that the criticism Bjoza was unfounded because Bjoza was never a member of the Iron Guard.