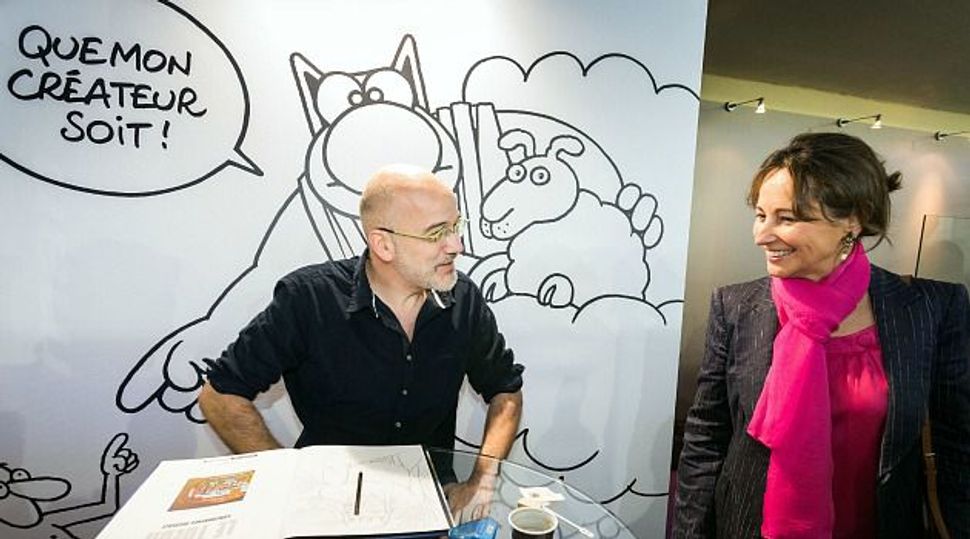 A cartoonist shows off his work at last year’s International Comics Festival in France. Image by getty images

Dozens of comics artists signed a letter calling for a boycott against any Israeli entity that does not “promote freedom and justice for Palestinians.”

The open letter, cosigned by more than 80 individuals involved in producing comics, was sent out Wednesday to the organizers of an international festival for comics artists scheduled to open next week in France, and which is cosponsored by the Israeli company Sodastream.

In the letter, the authors wrote that they call for the Angoulême International Comics Festival to sever all ties with Sodastream, which has a factory in Ma’aleh Adumim – an Israeli settlement regarded internationally as illegal because it is situated in the West Bank.

Sodastream announced last year that it would relocate, but the authors of the letter wrote that even if it moved to its intended location in Israel’s south, “it and other Israeli companies and institutions are part of a system built on the mass ethnic cleansing of Palestinian communities and sustained through racism and discrimination.”

Among the authors are Anaële Hermans from Belgium, Magdy El Shafee from Egypt, Alex Baladi of Switzerland and Leila Abdul Razaq from the United States.

Another cosignatory is Carlos Latuff from Brazil, who in 2006 took second prize in the International Holocaust Cartoon Competition hosted in Iran under the auspices of the Iranian regime. That competition was held to retaliate against the publication of cartoons mocking the Prophet Mohammed in a Danish daily. Submissions mocked, inverted or denied the Holocaust.

The French festival’s official homepage carries a statement expressing solidarity with five caricaturists whom jihadists Cherif and Said Kouachi murdered on Jan. 7 at the Paris office of the Charlie Hebdo weekly for its lampooning of Islam, along with seven others. Their accomplice killed a police officer on Jan. 8 and four Jews at a kosher supermarket near Paris on Jan. 9. The festival’s website commemorates and names all the victims killed in those attacks.