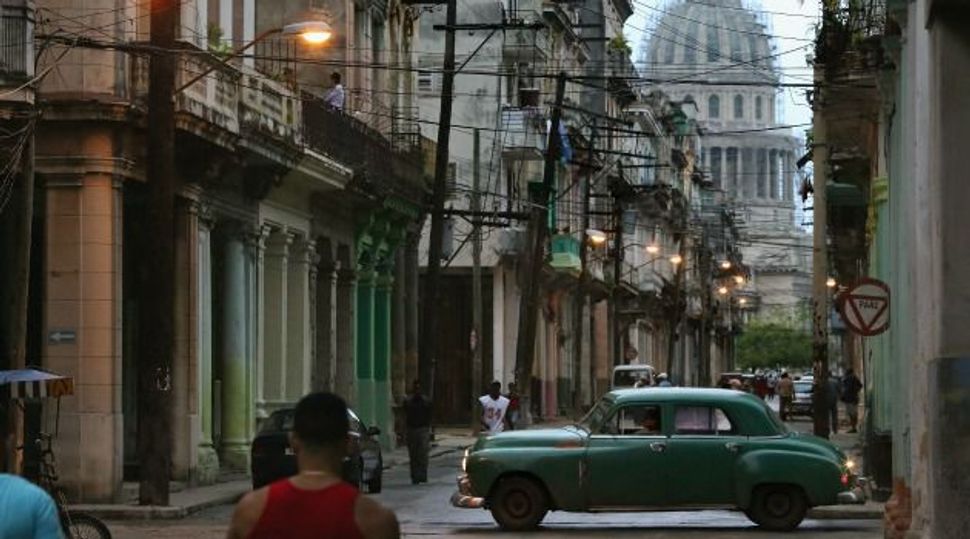 (JTA) — On a recent Friday night inside this city’s Beth Shalom synagogue, Aliet Ashkenazi, 25, stood draped in a blue-and-white prayer shawl leading prayers in a mix of Spanish and near-perfect Hebrew.

It was the first time she had ever led services – a feat considering she converted to Judaism seven years ago after discovering her father was Jewish.

The 300-seat sanctuary in the Cuban capital was near capacity, but the crowd filling the wooden pews was largely American, comprised of tour groups from New York and New Jersey. The next morning, with the Americans gone, the crowd had thinned. A handful of youths sat in the first few rows, leaving a gray-haired cohort of congregants in the back.

This is typically how things go for Cuba’s 1,500 or so Jews: Hordes of out-of-town guests arrive, bringing with them suitcases full of clothing and coveted medical supplies, and then they’re gone, leaving Cuba’s diminished Jewish community behind.

A month since the United States and Cuba announced renewed diplomatic relations after more than five decades of mutual recrimination and mistrust, it remains unclear how rapprochement will change things for Cuba’s Jewish community, which has shrunk tenfold since the end of the Cuban Revolution in 1959, when there were 15,000 Jews here.

Amanda Amato, a 49-year-old secretary, sipping a plastic cup of Cristal beer at one of the lodge’s biannual parties, said, “We have a difficult economic situation now, but it’s not for all time.”

Already there has been some easing. Americans – including the thousands of Jews who fled Cuba after the revolution – now can send remittances of $2,000 every three months to Cubans, four times the previous limit.

While Cuban Jews endure the same depressed conditions as other Cubans, surviving on monthly food rations and salaries that rarely exceed $40 per month, the community as a whole is the recipient of largesse most Cubans can only dream of.

Cubans generally have restricted Internet access, but computers at Beth Shalom are wired, and the synagogue’s youth lounge contains a PlayStation and Nintendo Wii. Financial support from humanitarian organizations such as the American Jewish Joint Distribution Committee, which has operated in Cuba since 1991, enables Beth Shalom to provide community members with meals on Fridays and Saturdays – often non-kosher grilled chicken or canned tuna, followed by coconut ice cream. The synagogue office houses the community’s pharmacy, which twice a week dispenses free medicine supplied by Jewish tourists and aid organizations. While heath care is free in Cuba, over-the-counter drugs are rationed for ordinary Cubans.

Some worry that the stream of international charity from humanitarian organizations such as the JDC and B’nai B’rith International has created a culture of dependency, particularly among older people who are more interested in the much-needed handouts than their Jewish identity.

Adela Dworin, president of Beth Shalom and the Jewish community’s de facto government liaison, said that Cuban Jewry is sometimes hamstrung by its financial dependence on aid groups that earmark funds for individual projects, complicating where synagogues can allocate donations.

“It would be better to send to us directly,” Dworin said. “We can’t depend our whole lives on Americans and Canadians. We must become more independent.”

The Jewish community also enjoys the support of the regime. President Raul Castro twice has attended Hanukkah celebrations at Beth Shalom. The country has two other synagogues in Havana and smaller congregations in the provincial towns of Santa Clara, Camaguey, Cienfuegos and Guantanamo.

Dworin was granted regular visits with Alan Gross, the Jewish-American contractor who served five years in a Cuban prison until his release last month. Dworin told JTA that she recently received an email from Gross in which he expressed a desire to return to the island.

Cuban Jewry’s greatest privilege, though, is also one of the community’s biggest challenges.

Ordinarily, Cubans are barred from emigrating without special permission from the government. Yet since 1992, when the Cuban constitution was changed to accommodate freedom of religion, a government concession to stave off unrest once Soviet aid ended, Jews have been allowed to leave for Israel. In 2013, 72 Cuban Jews made aliyah, according to Israel’s Absorption Ministry – a considerable number given the size of the community.

Most of the emigrants in recent years have been Jews in their 20s and 30s, few of whom remain in Cuba. Elianas Quinones, a 19-year-old medical student, said 20 to 30 of her friends have immigrated to Israel in recent years. The community’s Sunday Hebrew school, Albert Einstein, has 168 students, some as young as 4. But roughly 40 percent are middle aged or older, according to Hella Eskenazi, the school’s principal.

Though emigration continues, there has been a steady influx of converts into the community – mostly Cubans from intermarried families who have discovered their Jewish heritage since the early 1990s. Visiting Conservative rabbis from across Latin America have helped convert them in mass ceremonies. The most recent one was about three years ago, when 20 men were circumcised at Havana hospital, jumping for joy and crying “Mazel tov!” in front of befuddled nurses, Dworin recalls.

Dworin says she knows of at least 10 more people who want to begin the conversion process but can’t because Cuba does not have its own rabbi. She estimates that fewer than 20 of the country’s Jews were born to two Jewish parents.

For the few Jews here who keep kosher, they can receive beef rations instead of pork. The thick-bearded Jacob Berezniak-Hernandez, leader of the nearby Orthodox synagogue Adath Israel and a trained kosher butcher, distributes the meat from a small Old Havana storeroom.

“Cubans deserve a better life, with more materialistic things and more freedom,” Dworin said. “If the economic situation in the country improves, we hope people will stay.”

A key factor is whether the United States will lift its embargo of Cuba. In his State of the Union address on Jan. 20, President Barack Obama called on Congress to cancel the trade embargo, a major step toward American investment on the island.

Luis Szklarz, 76, who attends Adath Israel, which is secured behind a gate laced with barbed wire in Old Havana, said as long as the embargo remains in place, Jews will continue to leave the island.

“The old people are going to die and the young people are making aliyah,” he said. “There is no future.”

For Ashkenazi, relieved and exhausted after leading Friday night prayers, it’s hard to imagine a future not in Cuba. She describes the synagogue, which she attends every weekend, as a home away from home.

Whatever happens, she said, “the most important part of my life is here.”