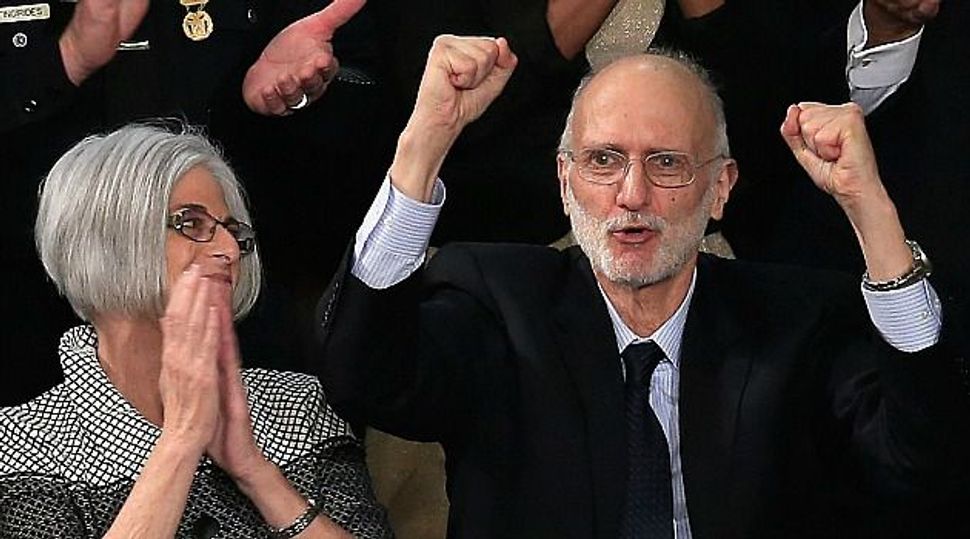 Home Sweet Home: Alan Gross, shown here basking in applause at the State of the Union address, enjoyed a welcome home party at his synagogue in Rockville, Md. Image by getty images

(JTA) — Alan Gross wore a gray suit, red tie and a perpetual smile as he took the stage Thursday night at Temple Beth Ami in Rockville, Md., at a welcome-home reception in his honor sponsored by dozens of Jewish organizations, including the the Jewish Community Relations Council of Greater Washington.

But while he celebrated being “home sweet home” with “my kehilla, my community, my tribe,” Gross revealed that his previous five years spent imprisoned in Cuba was the very opposite – “home sweet hell.”

Gross was released Dec. 17 from a Cuban prison, five years after he was arrested for his work as a subcontractor for the U.S. Agency for International Development hooking up the island’s small Jewish community to the Internet. He had been sentenced to 15 years for crimes against the state.

His release came the same day that President Obama announced the resumption of diplomatic ties with Cuba after more than 50 years.

To pass the time in captivity and keep his sanity, Gross fashioned jewelry out of bottle caps, such as a blue bracelet made of intertwining bottle caps in the shape of a Havdalah candle.

Rabbi Jack Luxemburg, Beth Ami’s senior rabbi, joked Thursday about the sizable crowd, saying that “it looks like Rosh Hashanah in here.” Addressing the crowd, he later turned serious to say that “in a way it is like Rosh Hashanah, turning a page in the Book of Life for our community and Judy,” Alan’s wife, who had doggedly advocated for his release. “Let us not forget the invisible hands who contributed to bringing Alan home.”

Rep. Chris Van Hollen (D-Md.) said it was special for him to look up at the State of the Union address and see Alan and Judy Gross sitting next to First Lady Michelle Obama. “What a journey, from five years in prison to the State of Union address with the first lady.”

He then gave a special thank you to Judy Gross who was “relentless. She was fighting every day, telling the White House the clock is ticking here.”

He went on to praise Alan Gross as an exemplary model of “resilience and keeping the faith.”

As wrenching as Gross’s experience was, he evidently kept his sense of humor. Van Hollen told the crowd that Gross got a call from President Obama while on the plane home. The congressman asked how the call went, and Gross said, “‘It was a great conversation, only the call interrupted my first corned beef sandwich in five years.’”

Geoffrey W. Melada is the editor-in-chief of the Washington Jewish Week.