Did CIA and Mossad Collaborate in 2008 Assassination of Top Hezbollah Officer? 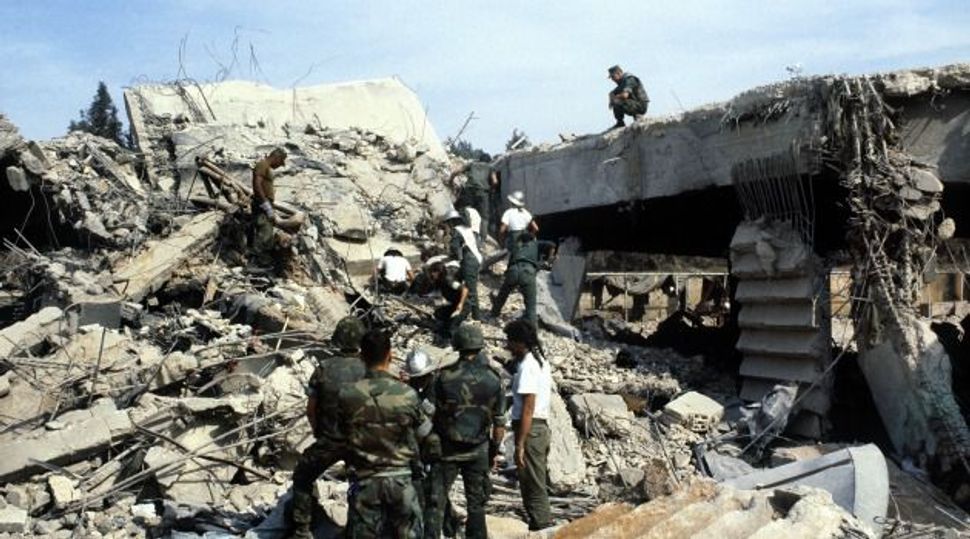 US marines search for victims, on October 31, 1983, after a terrorist attack against the headquarters of the U.S. troops. Image by Getty Images

The CIA and the Mossad collaborated in the 2008 assassination of Imad Mughniyeh, the top Hezbollah operations officer blamed for an array of terrorist attacks.

Two in-depth reports published this weekend, in the Washington Post and Newsweek, for the first time revealed the extent of the cooperation ahead of the Feb. 12 2008 killing.

It included a long period of both agencies tracking Mughniyeh in Damascus, where he kept a secret residence.

The CIA built the explosive device, hidden in the spare tire of an SUV, and the Mossad detonated it long distance from Israel as he walked past. Agents from both agencies identified him.

Mughniyeh is believed to be behind, among other terror incidents, attacks on U.S. and French military targets in Beirut in 1983, which killed 299 people, and on the AMIA Jewish community center in Buenos Aires in 1994, which killed 85 people. President George W. Bush agreed to the killing in part because Mughniyeh was believed responsible for attacks on U.S. troops in Iraq at the time.

Lawyers for the Bush administration said the killing did not violate a U.S. ban on assassinations, as Mughniyeh posed an immediate danger to Americans.

Hezbollah blamed Israel for the killing; a number of retaliatory actions since then have failed, and in recent weeks Hezbollah arrested an alleged spy in its upper ranks who was feeding Israel information about the planned attacks.

Israel killed Mughniyeh’s son last month in a strike on a Hezbollah convoy on the Syrian Golan Heights.

Did CIA and Mossad Collaborate in 2008 Assassination of Top Hezbollah Officer?