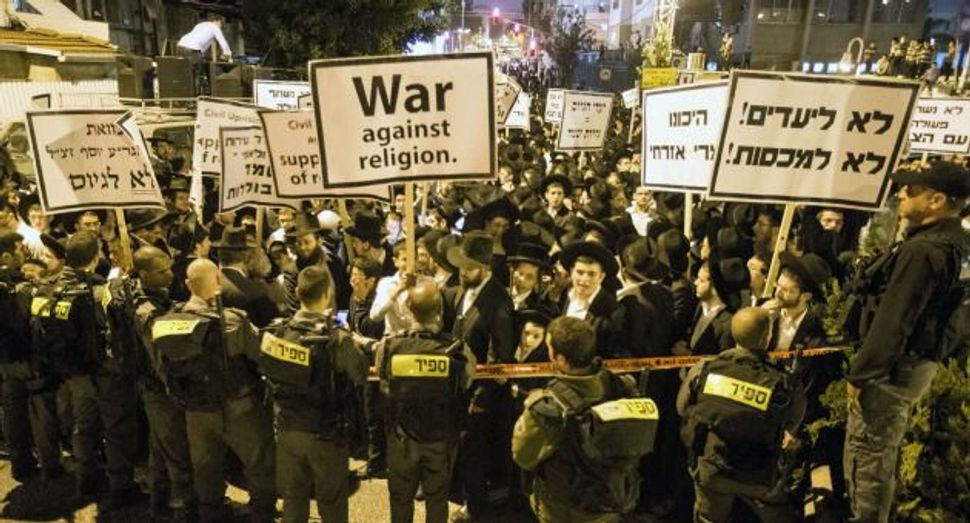 Ultra-Orthodox Jews gather in March 2014 to demonstrate against any plans to make them undergo military service. Image by Getty Images

Israel Police arrested about 40 haredi Orthodox protesters in the southern city of Ashdod during a demonstration on behalf of four yeshiva students arrested for missing their army induction.

Hundreds of haredi men and boys protested Monday in Ashdod, Jerusalem and at major intersections in the area against the arrest of the yeshiva students, who did not appear at the Israel Defense Forces recruitment center as required by law.

The students reportedly could have requested and received a draft exemption.

The protesters are followers Rabbi Shmuel Auerbach, leader of a non-Hasidic haredi faction who has called on his students to not deal with the army at all, including showing up for preliminary processing in order to request an exemption from the military draft, according to the Jerusalem Post.

The group did not have a permit for the demonstration.

Under a law passed in March 2014, haredi men will be criminally charged for evading the draft, but the penalties will not go into effect until 2017. The Tal Law, which allowed haredi men to defer army service indefinitely, was invalidated by Israel’s Supreme Court in February 2012 and expired in August that year.