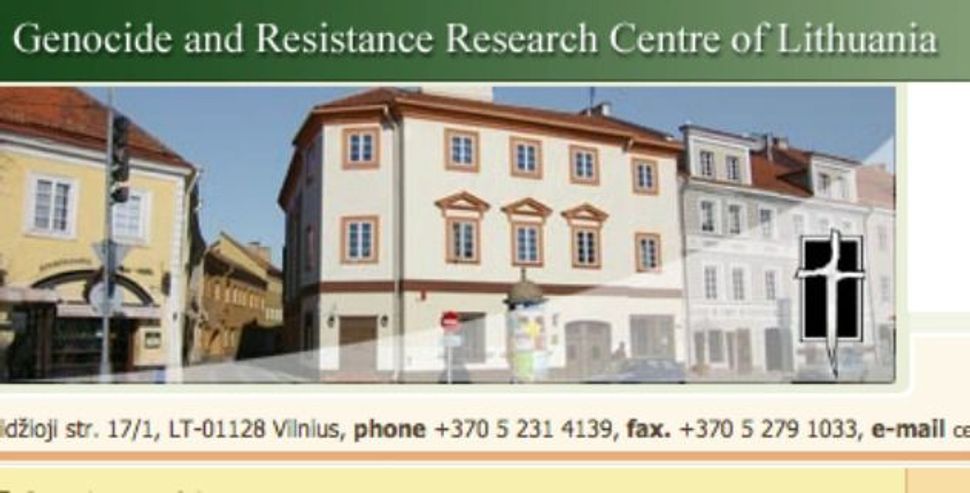 The Jewish Community of Lithuania defended its decision to cooperate during Holocaust commemorations with a state-funded institution which is accused of hosting anti-Semitic exhibitions.

The defense came in a statement posted Monday on the community’s website. It is a response to a letter that Efraim Zuroff, the director of the Israel office of the Simon Wiesenthal Center, on Jan. 28 sent to the community’s chairwoman, Faina Kukliansky, about the community’s newly-formed cooperation with Vilnius’ Genocide and Resistance Research Center of Lithuania.

The community hosted a book launch for Arunas Bubnys, a director from the center, on Jan. 26.

Zuroff said the center’s museum hosts “blatantly anti-Semitic exhibits overemphasizing the role of Jews in Communist crimes” and attempts to rewrite “the accepted and accurate narrative of World War II to the detriment of historical truth.”

The cooperation between the center and the Jewish community “is a disgrace and betrayal,” he added.

In its response, the community wrote that, “while the Jewish Community and Genocide Center certainly do not agree on some issues, the recent cooperation […] has brought some positive results,” including exposing 2,055 Lithuanians to war crimes charges and the awarding of state pensions to saviors of Jews.

One of the exhibits on display at the museum is a caricature showing former Soviet leader Joseph Stalin blowing bubbles labeled with some of his financial reforms over a dish of soap emblazoned with a Star of David.

Another shows a Soviet jeep driven by Stalin, Vladimir Lenin and “the Jew Yankelke.” A third, which references Soviet reprisal squads, shows a hook-nosed man wearing a kippah handing a flower shaped like a clenched fist to a partisan.

None of the caricatures contain curatorial reference to anti-Jewish sentiment, said Dovid Katz, a member of the Lithuanian Jewish community who documented the caricatures for his website,, and who supports Zuroff’s protest.

“Zuroff in his recent letter has deeply hurt Ms. Kukliansky, insulted the memory of her deceased ancestors and therefore should be deemed immoral and slanderous,” the community’s statement read.