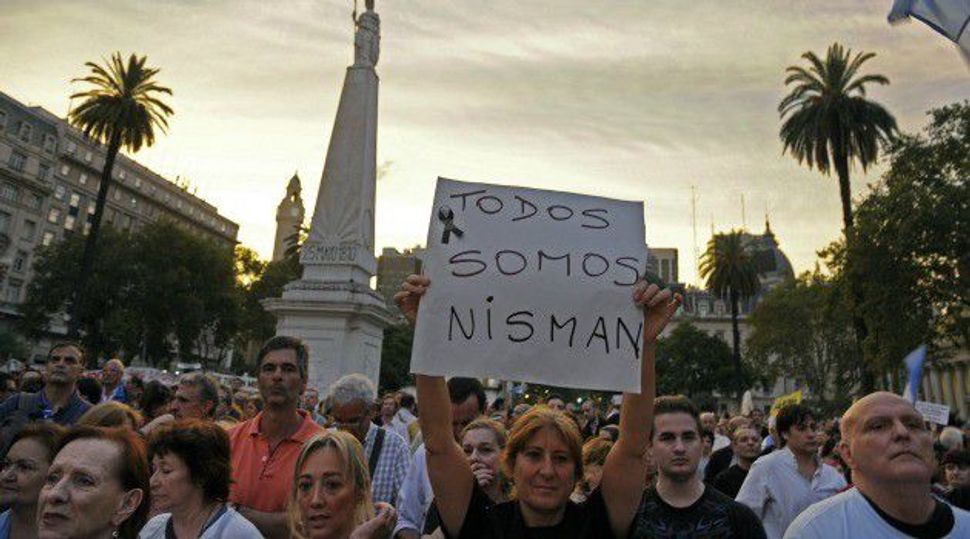 Argentines around the world will mark the one-month anniversary of the unexplained death of AMIA special prosecutor Alberto Nisman.

The judicial employees union and prosecutors in Argentina called for silent marches throughout the country on Feb. 18 to mark one month since Nisman was found shot dead in the bathroom of his Buenos Aires apartment.

Marches also will be held by Argentines living in such places as Miami, Barcelona and the United Kingdom.

“We want this silence to represent the peace we need and the peace that investigators need to solve the case,” prosecutor Guillermo Marijuan told reporters Tuesday at the entrance to a Buenos Aires federal courthouse. “It is also recognition of his work and the sorrow that overwhelms us. If there are going to be flags, they should only be Argentine flags.”

Nisman’s body was discovered hours before he was to present evidence to Argentine lawmakers that President Cristina Fernandez de Kirchner covered up Iran’s role in the 1994 attack on the AMIA Jewish center in Buenos Aires that left 85 dead and hundreds wounded.

Prosecutor Carlos Stornelli said Argentina must guarantee the independence and safety of prosecutors, even if members of the government are being investigated.

“Independence of prosecutors and judges is one of the mainstays of democracy,” Stornelli said. “Nisman is the first of its kind, but it might not be the last one.” Intellectuals, artists, politicians and popular personalities said they would join the march. Some members of the government called it an “opposition rally.”

“It is a march against nobody,” Marijuan countered. “It is for silence and respect. We want it to have no political connotation.”

“DAIA is part of the people who seek justice and we will participate, taking into account that after 21 years of struggle for justice we only have a dead prosecutor,” he said.